Michele Scarponi gets a new bike… but will they need to change it now he's won the Giro d'Italia?*

*subject to confirmation, terms and conditions may apply
by nick_rearden

Kevin Izzard 'Mr Wilier UK' couldn't have known when he was emailing us these pictures of Michele Scarponi's new bike being built up last week at the factory in Italy, that the Lampre-ISD star would be elevated to the top of the Giro d'Italia 2011 podium today, but things just work out like that sometimes.

Scarponi's first big race won't be until Tireno-Adriatico on March 7th-13th where he'll be hoping to repeat his 2009 win of the seven day stage race. In the meantime, he'll presumably be slaughtering the local fish'n'chippers for training on this new Zero .7 which is interesting for two reasons.

First, we were expecting him to be riding the ongoing Cento Uno SLR model which has been the previous Lampre-ISD mount. We're hoping we can entice Mr Wilier UK on here to comment on why they might have made the change. Perhaps Michele had read our Mat's review of the Zero .7? That's our theory, anyway.

Second, look at that handlebar and stem combo! We're guessing the sight of these Scarponi specials prefaces a forthcoming Limited Edition of the FSA Plasma 'bars and they're already £320. 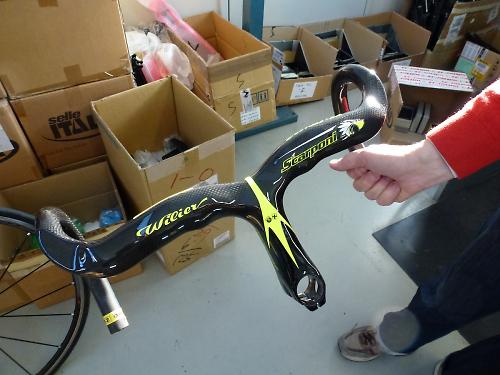