Abus new helmets and locks coming this year as well as the Kranium maybe next?

The amazing cardboard helmet - remember? - is still coming
by nick_rearden

German locks, helmets 'n' bags makers Abus were showing off their 2012 wares at the Zyro 'Open House' in Yorkshire last week. With their locks that are more secure while easier to use and helmets that try not to look like helmets they're clearly trying to think outside the box. In this case a box that has been recycled into the forthcoming Kranium helmet.

The Abus guest-of-honour was Anirudha Surabhi an RCA graduate who was awarded a James Dyson grant to develop the cardboard-based Kranium helmet that we wrote about on road.cc previously. Abus is licensing the Kranium process towards launching a commercial product and they were showing a prototype where the cardboard structure is nestled inside a shell made from existing polycarbonate although according to Jonathan Cole, Surabhi's co-director at Kranium Ltd, the intended outer material will be a form of plastic shaped from recycled cardboard. Abus are excited because it makes a helmet potentially lighter and thinner while exceeding the most stringent helmet standards. And, yes, we asked; the carboard is treated after assembly so it's waterproof. 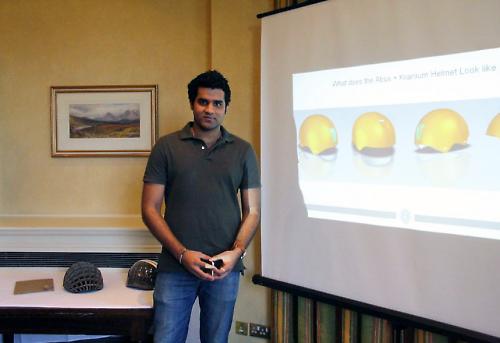 Also, being a company from Germany where sensibility on environmental issues in general and the EPS foam used in current helmets in particular is a good deal more more heightened than here, Abus are looking forward to launching what they see as a "gamechanging" helmet for cycling according to their Axel Rossler. Not to mention skiing, horseriding and other active pursuits for which Abus make safety helmets. 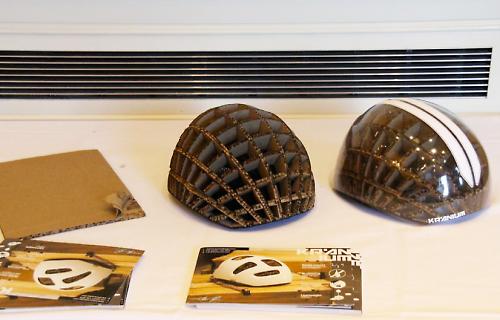 The Kranium polycarbonate shell is just for show; they hope to use material recycled from cardboard.

Their lateral thinking towards helmet design in products you can already buy is nicely illustrated in the Abus Metronaut (see top), a hat that's actually a helmet or, as they put it, "The helmet that doesn't want to be one." Underneath the baseball cap exterior is an otherwise modern albeit slimmer-profile EPS helmet with an adjustable wheel-driven retention ring, washable padding and reasonable ventilation considering it's intended as a commuting helmet. The existing Pinstripe and Tartan - don't call it Burberry - patterns have been successful enough for Abus to launch a Tweed version this coming year. Hoorah for the Tweed. 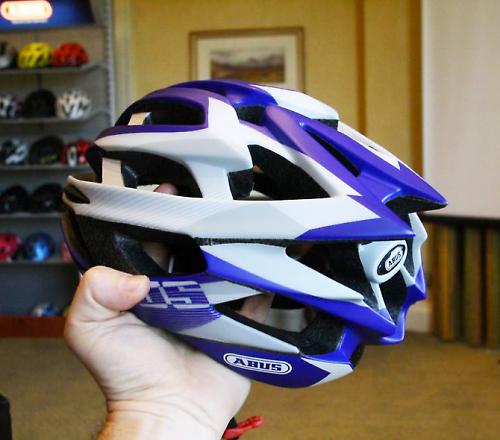 Abus Tec-Tical Pro: 245 grams, loads of vents, other views in the gallery.

And in helmets that look a bit more NFM - Normal For Mamils - Abus have launched into a category one notch up from where we've seen them before with the Tec-Tical racing helmet. The new Tec-Tical Pro weighs just 245 grams and has all the ventilation you'd hope for in a top-end helmet for £99.99 as well as a ratchet knob at the rear to adjust in two sizes all the way from 54-62cm. Rather like that Cannondale helmet we were posting about the other day, the EPS foam across the shell is reinforced with aluminium to allow for larger ventilation ports. A nice touch is that all the padding can be removed for washing. 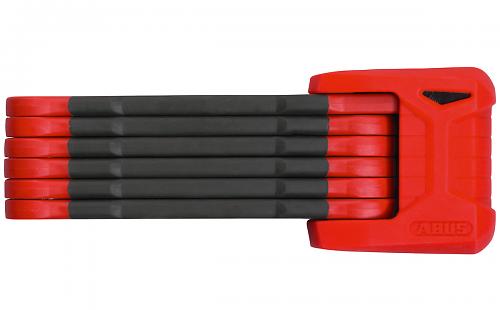 There are a couple of interesting things going on with Abus locks, an area where you'd generally not find us getting too excited except when we're trying to lock our bikes to something inconveniently-shaped or indeed trying to carry a lock on a nice bike at all.

Abus reckon their Bordo folding locks are likely to please the likes of us in that they can ..er.. fold into a neat package for storage, unfold to lock around odd-shaped objects and they're reasonably light. "Ah," we hear you say, "but if your lock gets broken by bandits; where's the fun in that?" What Abus are feeling pleased with themselves about is that the new top-end Bordos, the Bordo Granit X-Plus, an earlier version of which we reviewed here in 2010, and the Bordo 6000 at £100 and £70 respectively are revamped and now have 'Sold Secure' status in the 'Silver' category meaning that your insurance company is officially recognising their thief-proof qualities. 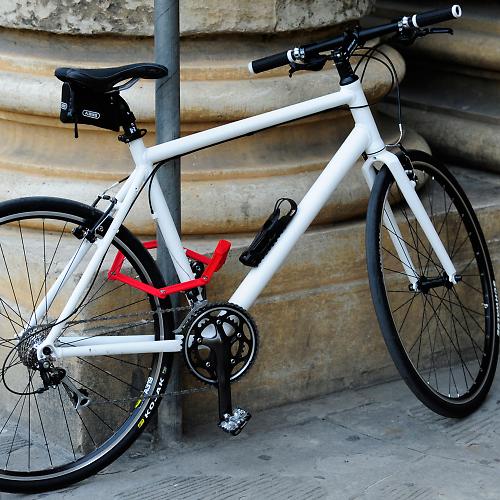 Bordo 6000 is use: otherwise it stashes in the downtube bracket or in your bag but much more compactly than a D-Lock. There's also some super-strong chain lock additions to the Steel-o-Flex family with the new options covered in the kind of nylon textile mesh that's used for bundling industrial cables. Abus reckon the covering of the new Iven Steel-o-Flex lock is kinder to your bike frame and anything it travels with in your bag, as well as the slipperiness making it more difficult for anyone attacking the chain with bolt cutters. Price is £49.99 or £44.99 depending on the 110 or 85cm length.

Finally, there's three different versions of chain and cable locks ranging from 85-185cm featuring a dual-function key and combination-lock mechanism. If that seems odd, Abus explain by saying the key can be used to set up the combination and in case you forget the number. Otherwise and for the rest of the time you have the convenience of a combination lock. Abus 1610 Keycombo chain: both a key and a combination so there's no more forgetting.