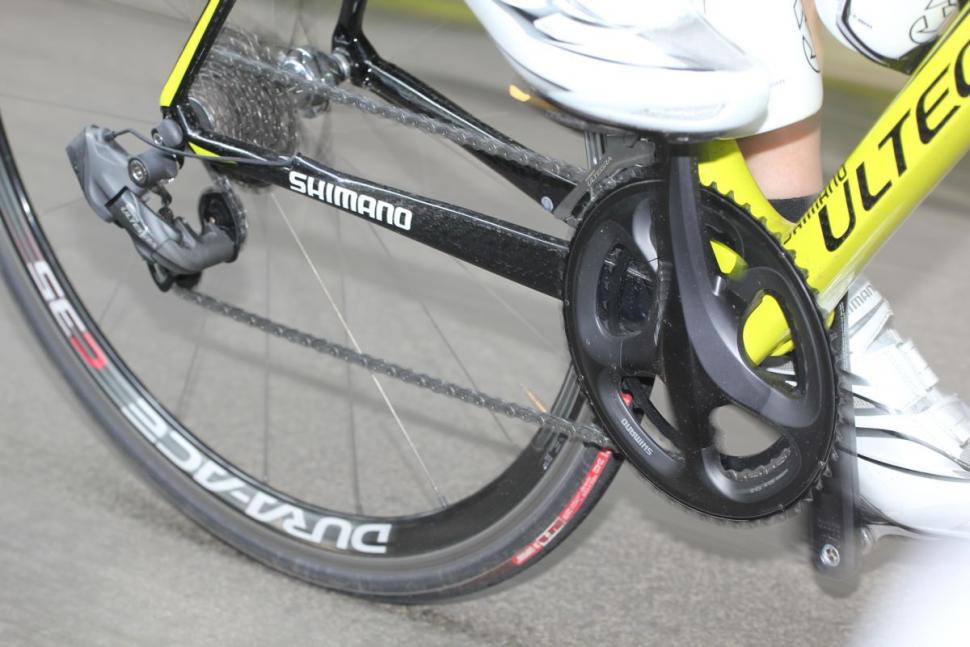 2011 was the year that electronic shifting proved it was here to stay. Probably. Previously, we had just Shimano’s Dura-Ace Di2, highly visible in the pro peloton but without much of a presence in the wider marketplace (and older readers might remember Mavic’s long gone Zap/Mektronic efforts). But back in June Shimano revealed that they would be reinventing Di2 in a considerably cheaper Ultegra format and late in the year Campagnolo showed the world their two new EPS systems.

Ultegra Di2 is just arriving in the shops now and it has created tons of interest largely because it’s just about affordable to a lot of people. Don’t get us wrong, it’s not cheap but as an example, Canyon’s Ultimate AL 9.0 Di2 LTD comes as a complete bike with Ultegra electronic shifting for £1,939. If you’d told us a year ago that you’d be able to get a Di2-equipped bike for under two grand, we’d have smiled sympathetically and offered you a stiff drink.

That’s an extreme example. Most Ultegra Di2 bikes are £3,000-and-something but you get the idea… the electronic technology has started to trickle down. Although it’s still confined to the upper tiers, we definitely get the feeling that it’s no longer a curiosity but a permanent addition to the cycling world. 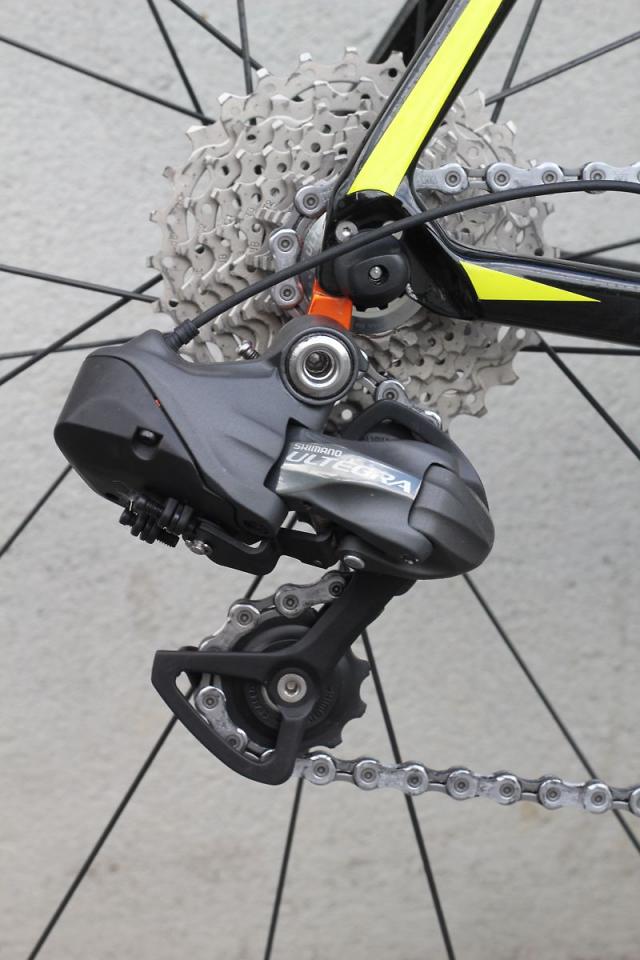 Talk of trickle down technology is only partly true, actually, because Shimano largely reinvented Di2 for the Ultegra format. Although it looks pretty similar to the Dura-Ace version, it’s very different and the two systems aren’t compatible – you can’t use Ultegra shifters with Dura-Ace mechs. What they do share is an ease of shifting. You just touch the upshift or downshift button rather than swing it. Okay, shifting is hardly the most difficult action in the world to begin with, but with Di2 it’s just that little bit easier. You get instant, faultless shifts every time.

Another benefit is the auto-trim on the front mech. In other words, when you shift across the cassette, the front mech adjusts itself automatically to avoid any chain rub. Again, that’s not the biggest advantage in the world but… incremental gains and all that. If you’re worried about running out of juice halfway through a hilly ride and being stuck in a big gear – which is what seems to concern everyone – don’t be. You only have to recharge the battery about once every 1,000 miles. Surely anyone can manage that. And the battery is good for up to 500 recharges… so 500,000 miles! Your knees are going to wear out before the battery.

Italy’s Campagnolo have jumped on the electronic shifting train too, shocking us by revealing not one but two electronic groupsets: Super Record EPS and Record EPS. Controversial. We weren’t expecting that.

Spain’s Team Movistar have been using Campagnolo’s electronic shifting in the pro peloton all year so we already knew that it was going to work, but what we didn’t know is just how well. So Dave and I headed out to Campag’s Vicenza HQ in November to try their system out and absolutely loved it. 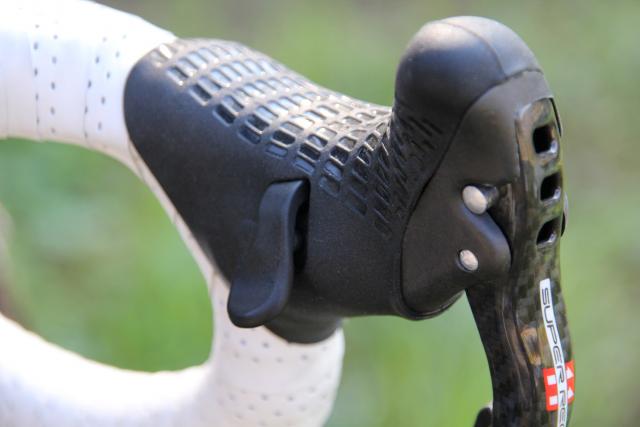 The shift buttons are really easy to push whether you’re resting your hands on the drops or the hoods; we found them easier to operate than Campag’s mechanical shifters. Another big benefit is that it’s super-easy to perform multiple shifts across the cassette with EPS. Rather than tapping the button several times as you do with Shimano, you just press and hold. We never put the stopwatch on it but Campag reckon it takes 1.5secs to move across the entire cassette.

EPS has a similar auto-trim feature to Di2. Once set up correctly, the front mech will move automatically when you shift across the cassette to avoid chain rub. Best of all, the quality of the shifts is spot on every time. When shifting from the small chainring to the large chainring, for example, the system overshifts very slightly to move the chain up and then backs off to the correct position. It also varies the force of the shift according to the sprocket you’re in. It’s very clever stuff. Just to allay your fears, Campag say this system works 1m underwater which means it should cope just fine even with the amount of rain we get in the UK. And if the worst happens and you do manage to break it out on the road, you can manually put it into the gear you want and it’ll stay put.

The only real problem as far as we can tell is that electronic shifting still has a slight weight penalty over a mechanical equivalent. We get the feeling that in five years’ time we’ll be looking back at today’s batteries in the same way that we look back at early mobile phones: “Look at the size of that! How did we ever manage?” But who knows?

Oh, and there’s the price, of course. Although Di2 has become more affordable with the Ultegra incarnation, EPS is going to be expensive. Okay, more expensive. Don’t expect much change out of… Actually, don’t expect much change at all. Campag haven’t released prices yet but we’d speculate that you’re looking at £3,000-£3,500 for the Super-Record groupset and maybe £2,000-£2,500 for Record, something like that. 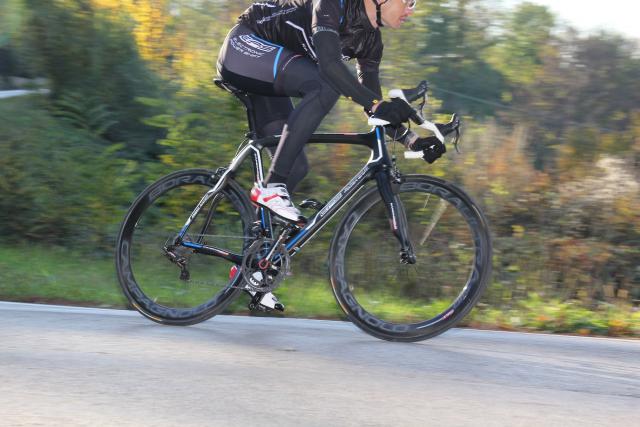 So, electronic shifting isn’t cheap by any stretch of the imagination but new technology rarely is. The point is that of the world’s three big groupset manufacturers, Shimano and Campag each have two electronic options on offer, and that’s a lot of momentum. And we already kind of know (unoffically) that Shimano are launching an 11-speed Dura-Ace Di2 group next year. It’s just SRAM who haven’t gone electric. Like Bob Dylan, they will eventually. And although you might not know it yet, chances are that one day you will too.