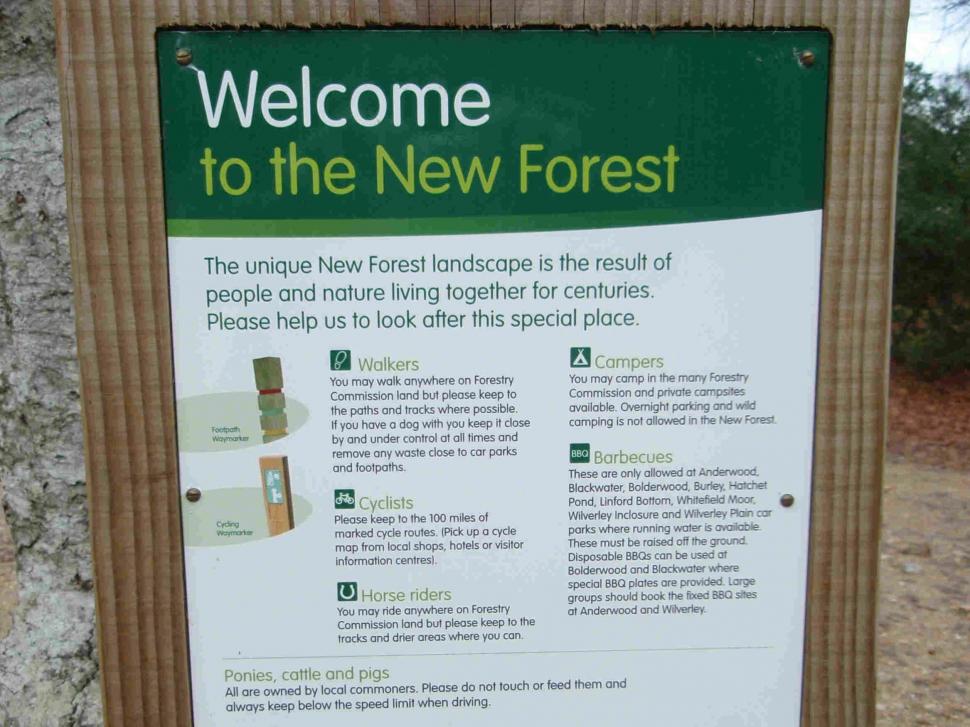 They're scary too, says Chair of Commoners' Defence Association… he's not scared of large packs of dogs though...
by Simon_MacMichael

The chairman of a body representing the rights of Commoners in the New Forest has claimed that an increase in the number of cyclists there is posing a danger to pedestrians and livestock.

Dr Graham Ferris, chairman of the New Forest Commoners’ Defence Association (NFCDA), established in 1909 “in response to the increasing conflict between the spreading urban populations around the New Forest’s fringes and the commoners’ animals,” insists that a rise in the number of people riding bikes there poses a risk to people and animals.

However, official statistics show that it is motor vehicles, not cyclists, that are responsible for the deaths of dozens of ponies in the National Park each year.

road.cc has discovered that while Dr Ferris is critical of bike riders over the alleged threat they pose to animals and the “much vaunted tranquillity of the Forest” apparently he does not feel the same way about hunting with hounds – he is joint honorary secretary of the New Forest Hounds Hunt Club, which supports a repeal of the Hunting Act.

Although he doesn’t give specific examples of any incidents that may have happened, among the general issues he highlights is an increase in the number of mass rides on the New Forest’s roads; several of the events in the Wiggle Super Series, for instance, are held in the area.

According to the Southern Daily Echo, the matter was raised by Dr Ferris at a monthly meeting of the Verderers’ Court in Lyndhurst.

Established in medieval times to regulate matters relating to the New Forest, the Verderers’ Court was reconstituted by an Act of Parliament in 1877 to represent the interests of the commoners rather than the Crown.

Nowadays, it has a statutory duty to take the area’s designation in 2005 as a National Park into consideration when making any decisions that affect it.

On the cycling section of its website, the New Forest National Park Authority says “You are welcome to cycle on public roads, byways open to all traffic, public bridleways, restricted bridleways, and dedicated cycle routes. You are not permitted to ride over the Open Forest, or on Forestry Commission tracks which are not dedicated cycle routes. Cycling on public footpaths is also not permitted.”

The National Park’s boundaries roughly correspond to the area of heathland and woodland within which some 500 commoners are entitled to graze livestock including cattle, donkeys, pigs, sheep and, most famously, ponies.

Dr Ferris told the Verderers’ Court that the number of cyclists riding in the New Forest nowadays meant that “The roads are effectively obstructed and confrontations leading to a breach of the peace are likely.”

He continued: “Commoners are increasingly concerned about the explosion in cycling, both casual and organised, and the apparent unwillingness of the authorities to take much needed action.

“The situation on the roads, particularly at weekends, is already critical.

“Off-road cyclists are being encountered far from the established cycling routes at any hour of the day or night.

“This represents a major intrusion into the much vaunted tranquillity of the Forest. Groups of cyclists at night with bright lights, shouting loudly to each other, is a level of disturbance that neither commoners’ livestock nor wildlife can be expected to tolerate.

“The Forestry Commission should instruct its keepers to enforce the by-laws and take action against persistent offenders,” he concluded.

Much of the New Forest is still owned by the Crown, whose lands are managed by the Forestry Commission.

A spokesman for the latter, also quoted in the Southern Daily Echo, said that it was working alongside other members of the New Forest Cycle Working Group to draw up a code of conduct for cyclists.

However, one already exists, contained in this leaflet jointly produced by Sustrans, the New Forest District Council, Hampshire County Council and the Forestry Commission itself.

Meanwhile, data compiled by the New Forest National Park Authority clearly demonstrate that it is motorists, not cyclists, who pose by far the the greater risk to livestock in the Forest.

During 2009, 24 foals and 41 mares were either killed outright or had to be put down following collisions with motor vehicles in the New Forest. There were no reported occurrences of animals being killed in incidents involving cyclists.

In the most recently published minutes of the court, for October 2011, 15 incidents involving death or injury to an animal were recorded, with three ponies, one donkey, two sheep and a pig killed.

Nine of those 15 incidents involved private cars or light commercial vehicles, with the remaining six classified as hit and run. The Verderers' Court does not record incidents involving deer, which fall under the remit of the Forestry Commission.

The danger to livestock posed by motorised traffic has been highlighted previously be Dr Ferris. In April, quoted by BBC News, he appealed for local garages to report vehicles that had been damaged as a result of collisions with horses and other animals.

"We hope people those who work in garages and workshops will feel just as badly as we do about hit and run accidents to our livestock and that they will be willing to report the accident," he said.

The New Forest itself was established in the late 11th Century as a royal hunting domain by William The Conqueror.

Famously, his son, William II, was killed by an arrow – whether it was shot at him accidentally or deliberately has never been established – while out hunting in the forest, supposedly at the spot now marked by the Rufus Stone.

For much of its history it regularly played host to large, often boisterous royal hunting parties, and on its website the New Forest Hounds Hunt Club, of which Dr Ferris is joint honorary secretary, claims to be “continuing 900 years of tradition in the New Forest.”

The New Forest Hounds Hunt Club continues to drag hunt, as permitted by law, with hounds chasing an artificial scent. Last year, Dr Ferris was quoted in local newspapers including the Bournemouth Echo as saying that trail hunting was “not like traditional hunting because it will never have the same element of the unknown.”

What it does have, however, is a large group of people on horseback, rather than bicycles, and one accompanied by a pack of baying hounds, presumably disturbing the very tranquility that Dr Ferris appears so keen to maintain.