Halfords Bikehut once again underlined their strength and their mastery of Tour Series tactics as they won round five of the Tour Series in Blackpool tonight (9 June).

The evergreen Rob Hayles exploded from the front of a small group of four riders - who had been away for most of the race – to ensure a perfect start to the scoring on a tight and fast circuit by the sea.

Conditions for the Tour Series’ first foray north were a little cooler than previous rounds, with a reasonably stiff north easterly wind facing the teams on the home straight. However, the sizeable Blackpool galleries were soon warmed up with some incessant early attacking from the Candi TV, Halfords and Sigma squads

After 10 minutes of the hour’s racing Dean Downing (Rapha Condor), Tom Barras (Madison.co.uk), Russell Downing (Candi TV Marshalls Pasta) and Rob Hayles (Team Halfords Bikehut) were in a select group of four riders that escaped the already thinning field of 50. They quickly gained 50 metres and by the time 15 minutes had elapsed this had become 20 seconds

The game was set as the big four teams in this year’s Tour Series all had a man in the break. This was a great team effort being played out on the Blackpool sea front as the break was in essence guaranteeing those teams with at least one rider in the top four finishers

After 30 minutes of racing the status quo had become 30 seconds as back in the main group the chase was being disrupted by the other members of the main protagonist’s teams, as Sigma, Sport Beans and Endura tried desperately to get the head of the chase organised.

Sprint two was easily taken by Russ Downing from brother Dean, as the main field sprinted for 5th place. This intermediate gallop only served to break up any chase for the escapees and by the time 35 minutes of racing had passed the lead was almost 40 seconds – looking like a ‘first lapping of the field’ in this year’s Tour Series was on the cards. Blackpool was serving up a tasty dish of team tactics for the growing numbers of cycling fans.

As the race entered into the last third the Endura Racing boys decided that they weren’t going to go down without a fight and Evan Oliphant came through the start finish area with a grimace as the clock reached 40 minutes. Next time round it was the turn of Team Corley Cycles’ Matt Higgins to drive the train as the teams of Halfords Bikehut, Candi TV-Marshalls Pasta, Madison and Rapha-Condor sat and watched in a chase group of around 25 riders.

With the race now entering the finale Russ Downing demonstrated why he is amongst the fastest men in the UK over 200 metres by taking the third and final sprint, and with 10 minutes remaining the field were almost 45 seconds back – it was now evident that the field were not going to be lapped, but equally the leading four riders were surely not going to be caught. It was now just a matter of which teams were going to occupy the first four places.

Three laps to go and the concerted efforts of the Endura, Sigma and the Corley boys was starting to reel in the four leading riders, however the leaders were now settling themselves for the last lap sprint that would determine the winner of a great night’s racing in Blackpool.

As the foursome rounded Casino Corner Tom Barras made a dash for home, however the older heads in the group held their nerve and allowed the Madison rider to lead out. Turning the sharp right-hander into the last straight it was the oldest head of all, Rob Hayles, who hit front and held two bike lengths to the finish ahead of Russell Downing. However, the Tour Series is all about the Team race, and the fast finishing bunch were flat across the road as the teams of the leading four riders aimed to back up the top four with an additional two riders as high up the main field as possible.

That honour went to the Halfords Bikehut squad, as Ian Wilkinson and ably backed-up Hayles to take the team prize on the night. Led by Russell Downing and taking second place on the night, Candi TV-Marshalls Pasta cemented their overall lead as the Tour Series hits half-way. 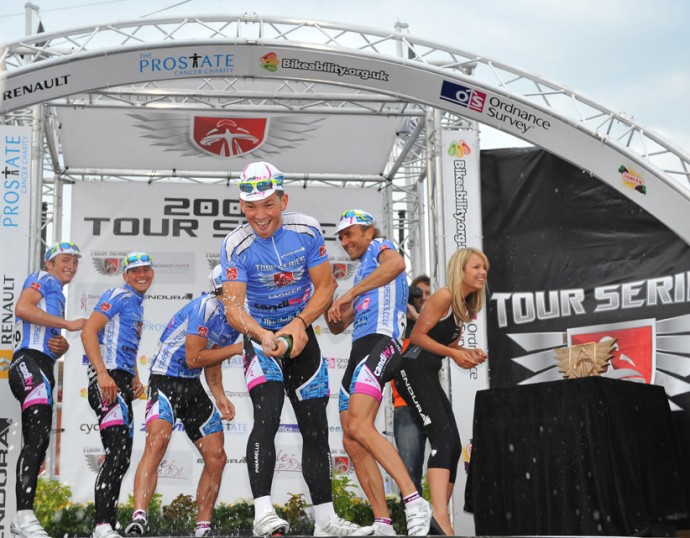 The race now moves on to round six in Southport on Thursday the 11th. Follow the Tour Series on ITV4 at 7pm on Wednesday’s and Friday.