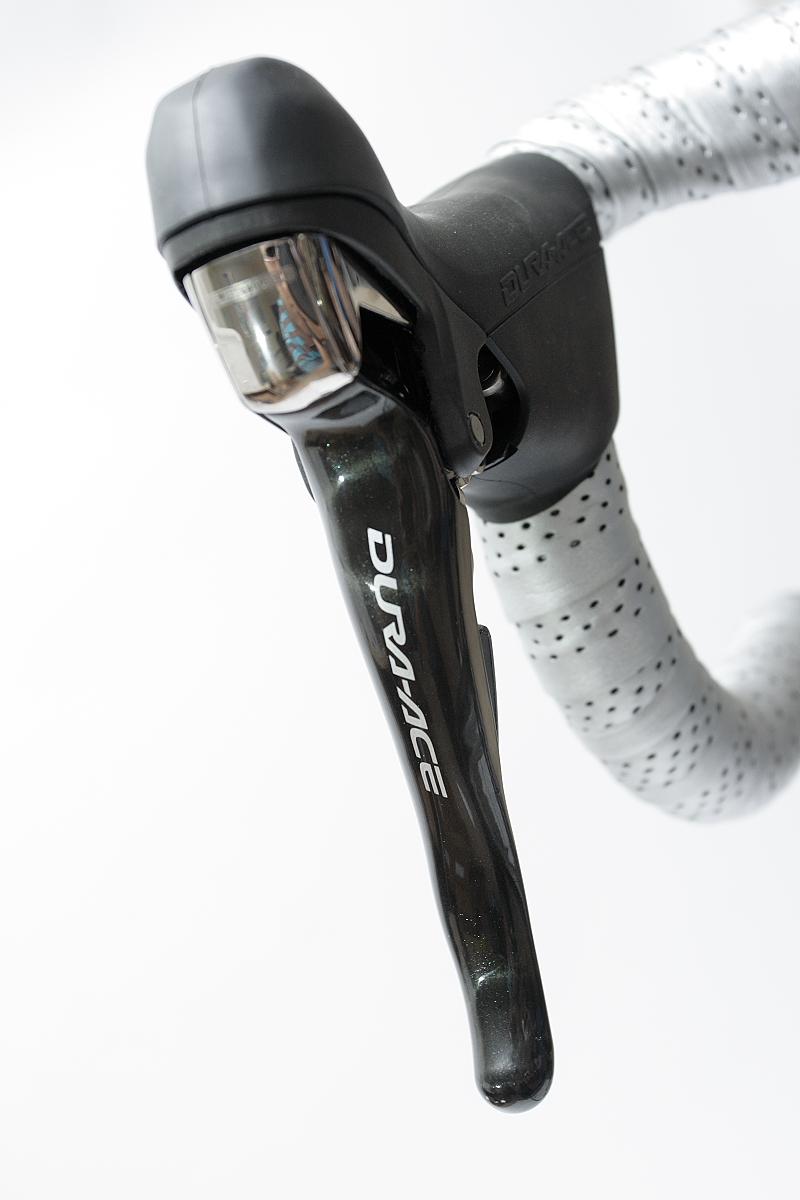 Just landed at the road.cc office: a new Cervelo R3-SL sporting the first set of Dura Ace 7900 to be sent out for review in Britain. We say the box landed, it would be more accurate to say it floated in. Full test on both bike and groupset to follow, but here's our first impressions of the new Dura Ace after a couple of laps of the park and a test ride on a bike fitted with the new levers at Eurobike. Even more pics in our Dura Ace gallery
First thing you notice when you get your hands on this version of Dura Ace is how minimalist the hoods are compared to previous Shimano designs – including Dura Ace 7800. Dare we say it they are almost Campagesque. 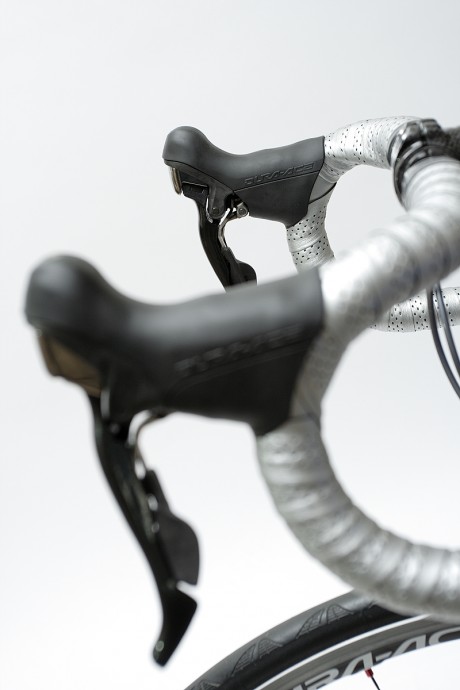 I recently rode a bike with Chorus and in feel they were very similar – perhaps Dura Ace is slightly taller at the front. I often used to wonder what would happen if you hit a bump while descending fast on the Chorus hoods – you could easily imagine your hands slipping off the front – never heard of it happening mind, even so you don't get that feeling with the new Dura Ace. On a short test ride they felt secure and comfortable. We like. 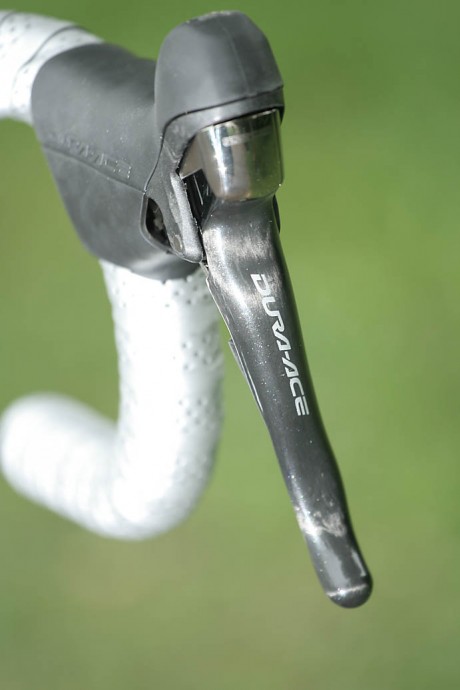 Lever action is light: not as light as on the previous version of Dura Ace but it is both precise and definite. You won't shift by accident because you've got an itchy trigger finger, but when you want it to shift it'll shift, and the effort required will still be minimal. The lever action required to shift up to the big ring is now more like that needed to shift down on the other side – more of a press than a sweep. 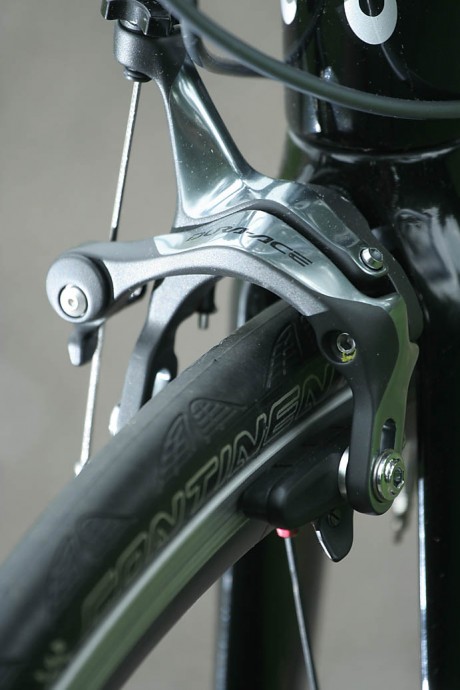 Braking is superb, as it should be on a top end groupset. Pull on the carbon levers and the response is light, firm and immediate – one finger is all it takes when riding on the drops. Mind you, we were riding a bike that weighed 14.3lb wringing wet (without pedals). Shifting up and down the rear cassette was again, light crisp and precise, not bad seeing as we simply took the bike out of the box, pumped the tyres up and went for a ride. Post ride it did need some minimal adjustment to get it shifting ultra-cleanly between the 6th and 7th cog, but we're talking minimal and we can't criticise it for that straight out of the box. The rear derailleur is a new design in carbon that Shimano say can cope with a wider ratio of gears. 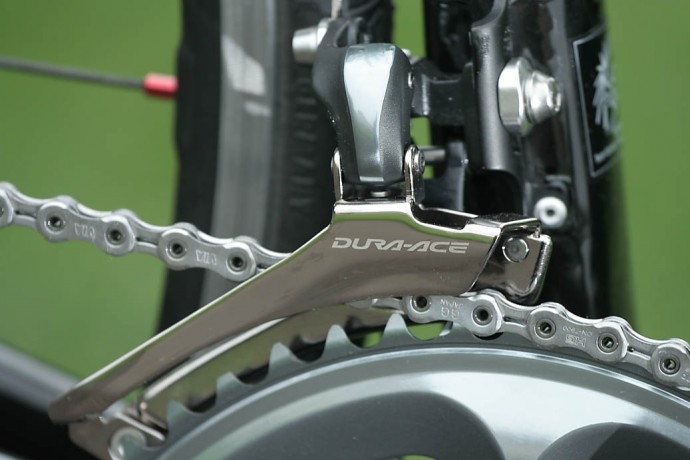 At the front shifting was also light but definite with minimal effort required to do the job. Over the last few years manufacturers have started to get a bit hung up on making gear shifting lighter and there was a danger that things were going to go past the point of being sensible with shifting so hair trigger light that it became impractical. What Shimano have done here is produce a system that has a sensibly light shifting action – just enough effort required to shift, but not so little that you are likely to mis-shift. Hard to judge the chainset on such a short ride, but the hollow chainring and thin walled crank certainly looks good on paper. Shimano say that they are both lighter and stiffer than the 7800 chainset and they certainly seemed plenty stiff enough on our very short blast – only longer testing will tell. One big plus is that 7900 offers a wider choice of gear sizes: 53-42T, 54-42T, 52-39T, 55-42T, 53-39T, and 56-44T, we rode the 53-39. We will be putting some serious miles into Dura Ace 7900 in the next few days, so look out for a more in-depth test coming soon. We'll give you our first impressions of the Cervelo tomorrow.

1
“Mob-like” teen cyclists get visit from police and council officers
2
E-bike rider on trial for causing death by careless driving in landmark case
3
Canyon Ultimate CF Evo 2020 - still silly light but now much cheaper
4
Near Miss of the Day 381: Overtaking van driver almost hits cyclist head-on
5
Group of 10 cyclists assaulted and robbed by gang of youths in Reading
6
Cooper Bikes partners with Spoon Customs for limited edition bikes celebrating historic Formula 1 success
7
Garmin Edge 520 owner adds to criticism of firm’s out of warranty support
8
"No Plan B" – Milan-San Remo at risk of cancellation due to coronavirus