Heroes of the week (better late than never)

Heroes of the week (better late than never)
by Tony Farrelly

Lots of heroes this week… not so many charity riding feats of derring do. Well, none. Actually that's not quite true it's just that nearly all those we're going to salute this week are famous, even our charity rider. So let's start with the one who isn't, well not as famous as he should be or maybe one day will be, Stéphane Rousson, the Frenchman who this weekend tried to fly a pedal powered airship across the Channel – there he is in the box below setting off from Hythe.

In the week when a Swiss adventurer did succeed in flying a home made jet pack across the Channel it was good to see Ms. Rousson attempting a human powered alternative. He didn't make it, but not for lack of preparation or due to technical failure. The wind put the kibosh on his crossing by unexpectedly changing direction when he was only 11 miles from his destination on the French coast. Monsieur Rousson's craft is pretty high tech, basically a mini air balloon powered by, well, a carbon fibre bicycle, plus a knife to cut himself free should the balloon climb too high, but minus a parachute because that would weigh him down. And what inspired him to make a bicycle fly? Watching ET when he was a garçon of course. No really. Here's some more vid of him and his amazing flying bicycle. Reportage M6 : Stéphane Rousson

Nex up, Lawrence Dallaglio who retired from professional rugby in May and who's since become smitten by cycling. He's followed the Tour for the last few years and as he told the Timesonline last week “I used to walk my dog around Richmond Park and see all these cyclists whizzing around. I thought they were a bit mad, but now I am one of them.”

And he's obviously mad too, because on Friday he set out with a team of 25 others to ride 580 miles from Biarritz to Banyuls, a trek that averages nearly 2000m of climbing each day including the Col Du Tourmalet. Okay, he's a very recently retired ex-professional athlete, but let's not forget he's a 6ft 4in, 18st one. So hauling it over the Pyrenees is going to take some doing.

In fact getting a bike to carry him also proved tough, in the end Specialized had to provide him with a beefed up custom build to do the job. Lawrence is riding to raise funds for Bliss, the charity for premature and sick babies and you can make donations here www.justgiving.com/pyreneescycle.

Hero of the week, this week, is the man whose accusing stare tops this story, Greg Lemond for sheer bloody cussedness.

It takes real balls to sit right at the front of Lance's Vegas press conference and ask the first question – about how Lance is going to be tested before and during his comeback… and then refuse to let it lie. Not only because you know you are going to get Lance's Blue Steel, er I mean cold-eyed killer look right back at ya, (see below) but also because over here in Europe we probably don't get just how popular Lance is on home turf – and the turf probably doesn't get any more homey than Interbike. 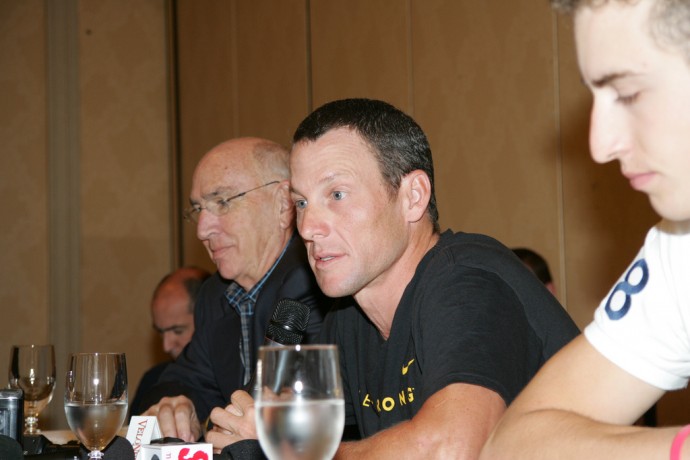 Lemond can't win, public opinion thinks he is motivated by bitterness (we don't, but make your own mind up by listening to what he has to say here on the Fredcast – you can also listen to the now legendary press conference), and even if Armstrong was one day exposed as a cheat – whoever exposed him wouldn't be thanked. Let's face it, no matter what you think of his contribution to cycling, Lance has done an awful lot of good.

Lemond might not be popular, but the awkward fact is that the methods he advocates for rooting out cycling's drug cheats have the simple ring of truth.

Your VO2 max is a constant it puts a limit of the amount of Watts you can produce and the length of time you can work at your peak for. The only way to get around that simple fact of nature is to cheat. It is also worth noting that when organisations have something to hide the easiest way to do it is by making everything very, very complicated.

So Chapeaux Greg! For pointing out that the emperor may very well be walking around butt naked. And of course hats off too to Nicole Cooke, and all the other new world champions.

Finally, we've got the picture (thanks Chipps) so we're damn well going to use it. Eddy Merckx, decides that sitting through "Greg Vs Lance Pt 265: The battle of Las Vegas!" is the perfect time to read the really interesting small print on his bus pass…