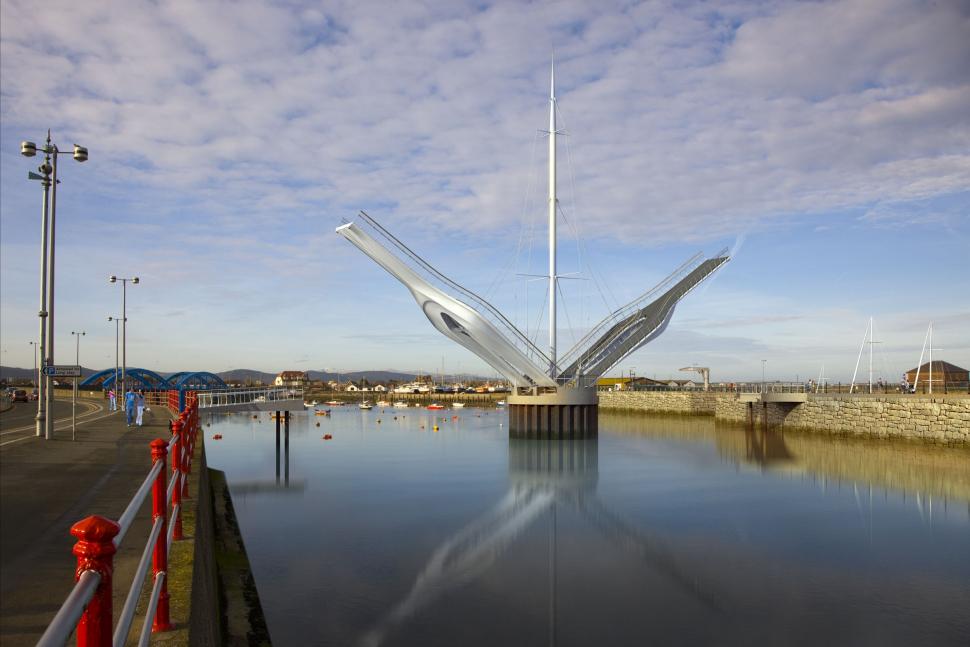 The design for a multi-million pound bridge for cyclists and walkers in North Wales has been unwrapped.

The 80-metre bridge will span the River Clwyd at Rhyl’s Foryd Harbour and has been commissioned by Sustrans, Denbighshire County Council and the Welsh Assembly.

Five companies were invited to pitch to design and build the £4 million bridge, the focal piece of the Sustrans' Connect2 route in Rhyl and at the heart of Rhyl's regeneration strategy. The contract has been awarded to the North Wales arm of the Swansea based contractor Dawnus, in association with the Chester office of design engineers, Gifford.

The winning concept beat stiff international competition with its unique nautical design which will lift the two lightweight walkways in two halves around a central mast to allow boats to pass.

A new crossing will be created over the Foryd Harbour and link into a network of new and existing walking and cycling routes, opening up the area for everyday journeys by walkers, cyclists, people pushing buggies and using wheelchairs.

It has been made possible with funding from the Welsh Assembly Government, ERDF and Sustrans' Connect2 since Sustrans won the TV vote to bring £50 million from the Big Lottery Fund to walking and cycling to 79 communities across the country in December 2007.

Glyn Evans, Area Manager at Sustrans, said: "It's really exciting to see such a wonderfully designed bridge coming to Rhyl, and one that will give people the ability to get around on foot or on bike for everyday journeys. It's a great centrepiece for the entire Sustrans' Connect2 project and Rhyl's regeneration and once in place it will open up the entire harbourside for everyone who lives and holidays in Rhyl."

Leighton Andrews, Deputy Minister for Regeneration, said it was great news to see such an important project getting underway. "The new bridge will not only provide an important link between Rhyl and Kinmel Bay but will provide Rhyl with a distinctive, eye catching iconic landmark and set a new high standard of design that will mark the start of a new era for the town and help instil a sense of pride amongst local people."

Public consultations will be held this July in Rhyl and Kinmel Bay where a model of the bridge will be on display along with other plans for West Rhyl including the High St and Harbour developments.

Subject to council ratification and detailed approvals, work on site is scheduled for early 2011 and should be completed within six months as much of the fabrication will take place off site so large sections can be lifted into position and reduce any disruption to the working harbour.