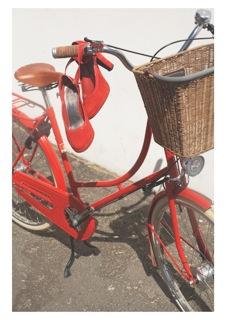 The medieval aisles of Derby Cathedral will be turned into bike lanes later this month as models show off stylish clothes for women riders.

The ‘Heels on Wheels’ event takes place on June 16 and marks National Bike Week. It has been organised by Derby CTC and locally-based Savvy Style Consultants to inspire more women to swap their four wheels for two.

Instead of promenading along the catwalk, models will take to bikes and cycle round the aisles wearing high heels, pencil skirts and business clothes that the organisers say can be worn by the commuting cyclist.

Amanda Salt, Derby CTC cycle champions project officer, said: "We know that the majority of women who own a bike don't cycle, so we're hoping that Heels on Wheels will inspire more women to dust down their bicycles."

One of those providing the advice will be Jay Hurley from Cycle Divas, a women's cycle school in Belper. She is both a cycle trainer and a professional image consultant, combining the two to encourage more women to take up cycling and stay stylish.

She said: "It’s a two-pronged approach. The perception among women is that cycling on busy roads is too dangerous, and that if they did cycle they’d have to do it in Lycra. This event is aimed directly at challenging that perception – that women can have the confidence to ride on our streets and do it in normal clothing.”

Models will ride in the cathedral from 11am before a networking lunch at the Cathedral Quarter Hotel and an afternoon trying out bikes and getting cycling tips in Cathedral Green.

Cycle Derby's education, training and promotions co-ordinator Mark Smith said the aim was to get people using their bikes as a way of life.

"The campaign has already had a major effect on under-16s. In 2007 we were providing cycle training for 350 youngsters in Derby. Now that figure is about 6,000," he said.

Other events being held to celebrate bike week in Derbyshire include a cycle challenge for council employees and ladies-only ride exploring the area around Foremark Reservoir.

The Workplace Cycle Challenge runs from June 15 to 21, and will feature teams of riders from five council departments.