Londoners came out in force yesterday to express their disapproval of Transport for London's plans to change the road layout around Blackfriars Bridge with an estimated 2500 people turning out for yesterday's third Blackfriars Flashride. Protesters say the planned changes will make the area less safe for cyclists and pedestrians who between them easily make up the majority of peak time users of the bridge.

The 2500 turnout was more than double the number expected by the London Cycling Campaign which organised the ride and over 10 times the number of cyclists that took part in the first Blackfriars Flashride back in June. Yesterday's ride included representatives from all the political parties including Jenny Jones and Brian Paddick 2012 mayoral candidates for the Green and Liberal Democrat parties respectively. Representatives of all four main parties had already combined in the London Assembly to call on TfL to reconsider its plans and come up with a more cyclist and pedestrian friendly plan – so far to no avail

However last night was not about the politicians it was about the people of London making their voices heard and that they certainly did. The ride assembly point was Doggets Pub on the southern side of the bridge and by the scheduled start time the line of riders waiting to go stretched well back towards Waterloo. As these pictures from the  ibikelondon blog show cyclists of every type, young and old turned out to make their displeasure known about TfL's current plans for the road layout around Blackfriars.

Earlier this week the London Cycling Campaign unveiled it's own design for Blackfriars one which put the interests of cyclists, pedestrians and public transport very much at the heart of road design, but which also simplified the road layout for all road users. A similar double T-junction design was considered and rejected by TfL at the early stages of the official design process on "capacity" grounds. However cycling groups and London's politicians say that TfL's original design and its subsequent revisions make the whole area less safe for cyclists and pedestrians and fail to take account of the fact that cyclists make up a growing proportion of traffic on the bridge accounting for a third of peak time traffic by the latest estimates - on five of London's bridges cyclists now account for more than half of peak time traffic. 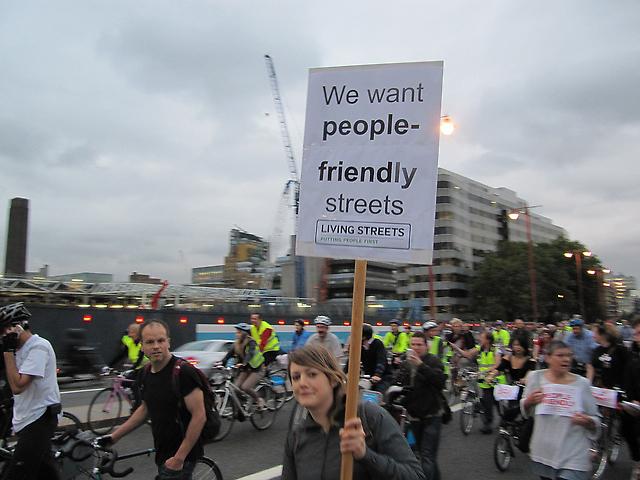 On the same day as the LCC unleashed its alternative vision for Blackfriars Transport for London Commissioner, Peter Hendy called for a "Century of Cycling" with significant investment in infrastructure projects to further continue the rapid growth of cycling in London and to spread the benefits far beyond the capital.

Last night on Blackfriars Bridge, Londoners and their politicians told him to put his money where his mouth is.

The controversy over TfL's design for Blackfriars is rapidly becoming a touchstone issue on which the cycling credentials of London's poltician's and of the current 'Cycling Mayor' Boris Johnson will be judged - Transport for London's position looks increasinlgy untenanable in the face of protest from all sides which in turn leaves a large question mark over the depth of the Mayor's commitment to his own Cycling Revolution.

Given the commissioner's comments and the fact that next year is an election year for London's politicians there is still all to play for at Blackfriars.

You can find out more about the campaign for a safer Blackfriars Bridge at lcc.org.uk and for a eye witness account of yesterday's ride visit ibikelondon who also supplied the pics for this story.