The German Cube brand is promising its 'fastest ever' frame with the introduction at Eurobike next week of the new version of the Litening Super HPC carbon model. Weight is claimed to be down 150 grams to 860g without losing torsional stiffness but with comfort added by slimming the seat stays and top tube.

Cube is saying it's a refinement process, paying attention to lots of little details, that has enabled them to improve the already successful Litening Super HPC carbon frame. Road.cc reviewed the 2010 version back in May and we certainly didn't complain about the weight, finding it a "light and punchy speed machine with instant electronic shifting." although Mat Brett did add, "just try not to think too much about the price." However, to remain competitive against premium brands with teams strutting their stuff at the Tour de France any self respecting carbon-fibre frame costing top dollar needs to be dipping beneath the 1,000g threshold this coming year.

All the aluminium parts where headset and bottom bracket races would have been seated are gone and the wheel drop-outs are now all-carbon fibre. And, needless to say, in commendably embracing the move to comfort as a performance advantage - "All the unnerving vibrations and small bumps from the asphalt are reduced to a minimum. The rider will save energy and feel fresher," as they put it - those slimmer stays and top tube of course are lighter too. Cube is also doing the thing that we saw at Cannondale on their new Synapse the other week in fitting a shock-dampening super-slim seatpost, this one made by Syntace. 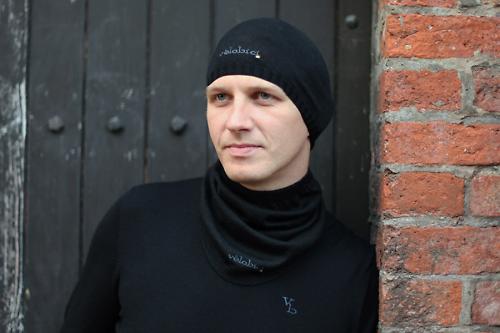 British bike clothing company Vélobici is offering a range of garments knitted in Leicester but made to honour one of cycling's greatest endurance events, the Paris-Brest-Paris which has been going on in France this week.

Vélobici co-owner Chris Puttnam says, "The Paris-Brest-Paris is synonymous with panache and endurance. It’s among the toughest challenges you can undertake as a cyclist and we wanted to create a collection which reflects both. The PBP Collection is all about style and comfort, using seamless technology, durable Merino wool and Therm°cool fibre."

The modern amateur Paris-Brest-Paris randonnée runs every 4 years and was taking place this week (21 – 25 August) covering 1,200 unsupported miles with an aim to finish within 90 hours. In order to qualify, riders must first complete events of 200km, 300km, 400km and 600km.

The five items in the new PBP collection, all manufactured in Leicestershire from seamless Merino wool, are The Couche - a base layer tee for £60, a snood collar at £30, cyclists underpants for £29, a £22 skull cap and gloves for £20. The whole collection is also available as a bundle for £125.

Vélobici is claiming all the garments are suitable for on and off the bike and that the Therm°cool fibre mixed with Merino wool evaporates moisture quicker than other traditional materials. "Hollow voids in the fabric offer 'thermobuffering properties, protecting the wearer from temperature changes," according to Vélobici. All we know is we've been cycling in to work in civvies topped off with one of their Classic Merino Vs and it's great for these premature Autumnal mornings. 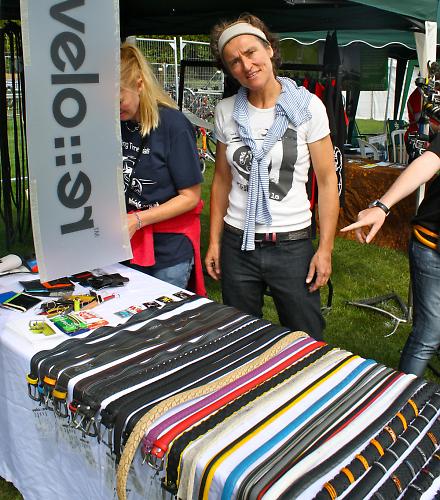 One of the finds from last weekend's Bike Blenheim Festival was velo::re, a little company from South London that collects discarded tyres from bike shops all over the city and then recycles them into the most creative collection of belts you can imagine. Betty from velo::re showed us our favourite, the Beltoluci, a trouser holder-upper adorned with little diagonal strips of reflective sidewall designed to be visible from behind when cycling. Literally brilliant. Prices range from £30 - £45 and you can even have a well-loved and significant tyre made into a custom belt. 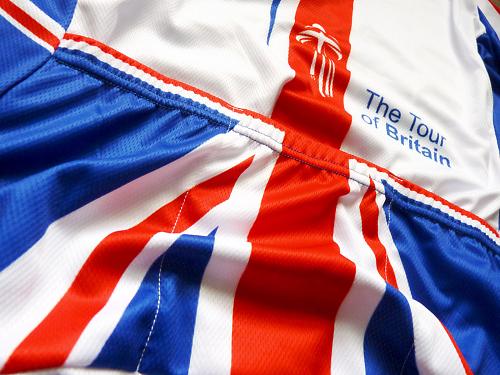 Yes, it's almost that time when we'll be riding out to see our plucky Brits do battle with the Continentals while they all fine-tune their form for the World Championships in Copenhagen at the end of September. What better way to stir patriotic pride than an official Tour of Britain jersey in the only colourway possible for the purpose? In aero polyester for £39.95 and being designed by Morvélo, it's also officially 'cool' as well as cool in case we have a late summer heatwave. We can see this being worn with a decent base layer and armwarmers. Black or white, though?

Halfords getting in on the trendy luggage

It's not just the likes of Bobbin Bikes and Brooks offering cycling luggage straight out of the pages of the CTC Gazette circa 1954. Even Halfords 'Britain's Biggest Bike Shop' derided by chainstore snobs - get over yourselves! - but loved by shoppers in need on Sunday for a giant-sized can of WD-40 - not to mention the all-conquering Boardman bikes - is stocking wicker baskets, 'ironic' patterned panniers and cyclists' canvas shoulder bags as worn by swarthy young chaps in Alan Bennett plays. The Rosa cheerfully patterned messenger bag is £29.99, the Moray canvas messenger bag is also £29.99 and the Postino black waterproof single office pannier £38.99.

British made Exposure lights get LED and cleverness upgrade

Exposure Lights has increased lumen output across the range by upping the spec of the Cree LED bulbs employed in its front lights by up to 10% and also adding new Intelligent Thermal Management circuitry to improve efficiency at high running temperatures. There is also a revised charge port, now gold plated, and a new silicon cover to prevent ingress of mud and water into the Smart Port where recharging and accessories fit.

The Exposure light brand is well-known among serious off-road, night-time riders for providing some of the best and longest-running lights and there is a an extensive range to cover all eventualities from a truly massive 1,925 lumens from the Six Pack for an eye-watering £449.99 to a commuter's 110 lumens for £85. Either way, they're well engineered and British made so we're inclined to like them even if they're a bit pricey. In fact, our Leonie said just that when she reviewed the £275 Toro front LED back in February: "Compact, powerful light well suited to dark roads, but a hefty price tag."

The 2012 front lights across Exposure's range of 10 models will feature an upgraded Cree LED named XPG R5 which, according to the company, "keeps the same great beam patterns and colour temperature" but ups the output from between 7-10%. "We are quoting 325 lumens per LED rather than the 300 in 2011," according to Exposure.

In addition, the electronics are changed and include what Exposure has branded Intelligent Thermal Management (ITM), patented technology which boosts the efficiency of the LEDs at high temperatures, keeping you ‘Brighter for Longer’ as they put it.

Finally, the latest changes include a gold-plated charge port for better electrical conductivity as well as improved sealing in the form of a silicon covers. 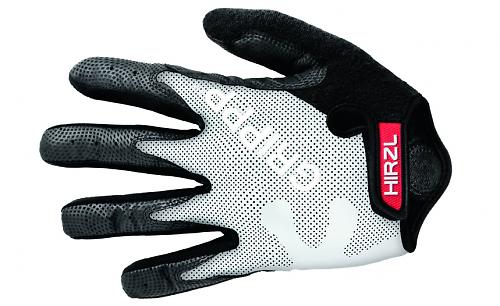 The Look for sportive cycling at the moment is clearly black and white so it's nice to recommend a new product that is both on trend and practical. Hirzl is a Swiss sports glove maker - golf mostly up to now - that is making inroads into cycling by introducing new techniques and materials that we may be familiar with from other areas. Kangaroo leather, for example, was big on Carnac Lemond cycling shoes and more recently the new Fizik R1 but it's not been seen on cycling gloves before now, to our knowledge. The advantage for an Autumn/Winter full-fingered glove that we can expect to get wet is that Kangaroo leather apart from being extremely soft yet durable is also amazingly grippy, especially when wet. It must be why Hirzl called them Grippp. Anyway, the palms and most of the fingers are black leather, the backs white breathable sythetic- or there's a red option - for high-vis hand signals and there's a reassuringly soft 'n' fluffy nose drip zone in more traditional bikie style. Price is £44.99 and there's also a short fingered version for folks heading south for the winter at £34.99. 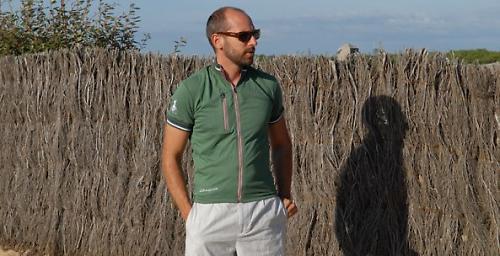 We introduced you to Cafe du Cyclisme back in June when the website went live and since then, despite the veritable flurry of comments on whether and who has patented all the retro cycling jersey designs back to 1910, the little French brand has been moving along doing its own thing in a way that looks a whole lot softer than most cycling clothing brands. A little more French, but then that's maybe because the owners are indeed French. Anyway, this new green option of the existing Yvette full-zip 55% Merino jersey went on sale this week for £103 and we like it a lot. Although we may be influenced by the look of that Azure sea in the background. Quelle surprise! 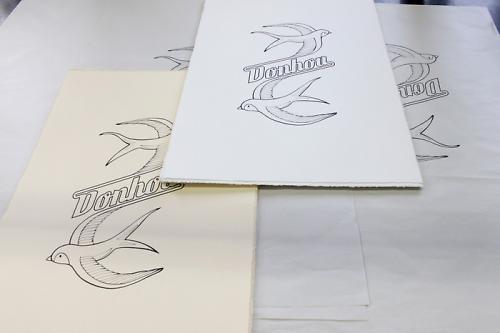 It seems so many people admired Tom Donhou's logo at the recent Bespoked custom builders' show in Bristol that a local printmaker in Donhou's home city of Norwich was commissioned to make a numbered run of 20 Donhou Swallow prints. "They look and feel great having been printed by Suzanne on textured heavy weight uncropped A3 paper," according to the new framebuilder. They're £15, posted. Get 'em before Donhou gets famous, we say. 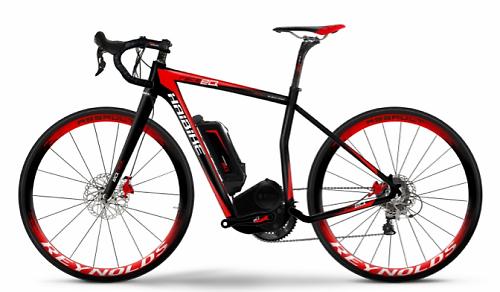 We have Torben Finn Laursen of the cykling.org site in Denmark to thank for his comment this morning reminding us that with the Eurobike show at Freidrichsafen in Germany upon us next week we have lots of craziness to look forward to apart from the usual big hitters like Shimano, SRAM & Campagnolo. Mind you, looking at the HaiBike site, it does look as if they make loads of perfectly normal bikes, too, so it's possible we're falling into the trap of succumbing to the allure, if that's the word, of the "show special"; a machine with no other purpose than to attract attention. It's done that now and there's a lot worse to come.