Canadian brand famous for its mountain bikes has always made clever niche models for the road.
by nick_rearden

Canadian bike brand Kona is launching a new King Zing top-notch road racer with a carbon frame as well as a revamped version of the successful Major Jake crosser. There's a new utility machine, a Mixte women's number and a great-looking Alfine-8 commuter.

Kona has teamed up with Italian frame maker Dedacciai in the production of the new King Zing carbon road racer, a model previously in the range with an aluminium frame. Claiming to be "designed to excel at everything from Cat 2 crits to long and arduous GranFondos" the new frame is a moulded monocoque with a tapered headtube and all-in-one carbon fork nicely integrated into the frame design. The componentry will depend on Shimano for the Ultegra drivetrain, FSA for the chainset and cockpit parts with Mavic Ksyrium Equipe wheels. Price is £2,450 with bikes arriving in the autumn.

It will be interesting to see how Kona do with the King Zing in 2012. Despite some very interesting bikes, including a foray into magnesium road frames, and including the superb steel Haole the Canadian company has never really cracked the road market - certainly not in the UK. Geometry on the King Zing is classic road say Kona and designed to bring out the Kona ride characteristics, if the very find handling Haole is anything to go by Kona do know a thing or two about dialling in the ride on a road bike. On the subject of the Haole, sad to report that it's been dropped from the 2012 line up which does seem a little odd given that steel road bikes seem to be making a bit of a comeback and that Kona made a cracker of a bike. Anyway, I digress, basically the King Zing is a classic take on the pared down road bike – Kona describe it as a "no frill frame set that's light, fast, and responsive". Oh, and it's got custom spines on the seat and chainstays for extra v*ertical c*ompliance which says Kona "still effectively reduces side-to-side deflection" deftly avoiding the use of the "L" word. 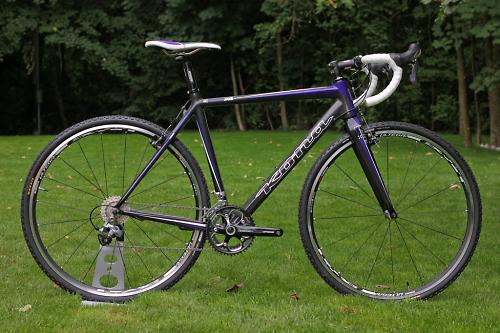 The range-topping cyclo-cross model Major Jake carries on with the carbon fibre frame and fork introduced for the 2011 model year. Spec takes a jump up this time, though, with Avid Shorty Ultimate brakes, an Ultegra drivetrain and FSA CX-specific bars, stem and seatpost for £3,000.

Dr. Fine 'A subtly brilliant steed for the discerning commuter' Hub-geared commuters bikes seem to be hitting the mark with urban riders and commuters combining as they do the clean lines and low maintenance of a fixed or singlespeed with the knee and hill friendlieness of gears. It's got Shimano M446 disc brakes too for extra stopping power and even lower maintenance. The Dr Fine indeed looks fine with Shimano's Alfine-8 internal hub gear mounted in an alloy frame with a 42T chainset up front for fast commuting. "You simply won’t find a sexier city bike," as Kona put it and the price is £1,000 or a penny under to hit the Cycle To Work Scheme budget. It does look to be mudguard capable and if we were going to nit pick we'd probably like to see it come with mudguards as standard - mudguards are cool after all, yes who'd have thought. As ever with Kona there's a Dr Fine to suit all sized riders with 6 models available ranging in size from 46 through to 61cm. 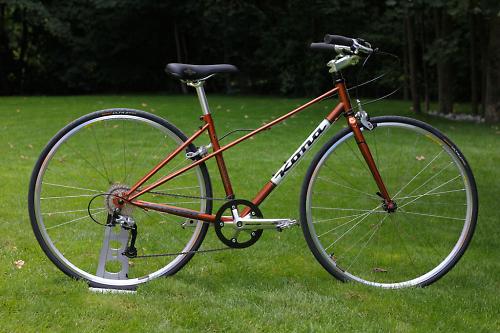 Kona 2012 Roundabout; a 'mixte' frame for the first time from Kona.

Women's Mixte frames are clearly showing a resurgence with all the interest in classic old French 'porteur' models and the new Kona Roundabout looks just great in that role. It's an £850 bike, so it had better be more than just a fashion statement, though the Cro-Mo tubing, 9-speed Shimano derailleur gears and generally lightweight alloy rims and swoopy bars should differentiate this in performance terms from a whole host of generic women's city bikes. That said it does sit very firmly in the same ball park as the new Charge Hob 3, while it has more gears, the Hob 3 has colour co-ordinated mudguards as standard - the Roundabout will take guards too, and both will also fit a rack. The Hob 3 is also £250 cheaper which does buy a lot of whicker baskets – the Kona boasts a butted frame so we'd guess it is probably lighter than the Charge although probably not massively so. The Roundabout is available in three sizes, small, medium, and large.

Another Kona utility model shows the breed is catching on 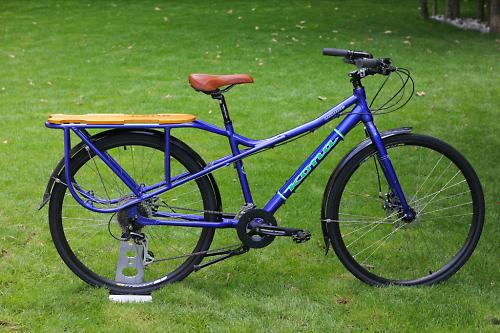 Also in the family of Kona bikes it's calling SimpliCITY, is another less expensive utility bike than the company's now legendary Ute – over the last few years we've tested the standard and electric versions. For 2012 your basic Ute costs £950 and that buys you some smoother welds, an internal headset over the 2011 model, beefed up head and down tubes for extra front end stiffness. The bike that caught our eye though is the  £200 cheaper Minute - pronounce that Min - Ute if the other one is Ute - has a shorter wheelbase and a smaller wooden load deck at the back (two thirds the size of the Ute's as you ask) but still carries 300 pounds on a stable platform and comes with its own pair of panniers. Like it's long wheel-based big brother the Minute is available in two sizes only 18 and 20 but there's a generous step over height thanks to that sharply sloped top tube so those two sizes should fit pretty much all. Pro Max disc brakes do the stopping on the Minute while Avid BB-5s stop you and your load on the Ute. As you'd expect given that it's £200 cheaper you get a slightly down graded spec on the Minute, but only slightly it has to be said… being completists we'll be asking for one in on test.

It's worth noting that the Minute actually costs a hundred pounds more than the fully grown Ute did when we reviewed it back in 2009.