A wizzy new cross-purpose road bike called Cerium and an Alfine-8 tourer by the name of Journey are our picks from the 2012 Ridgeback lineup.
by nick_rearden

Ridgeback has been showing its 2012 bikes to dealers and the press these last two weeks at head office in Milton Keynes and although there is no change from the brand's signature understated look based on shades of the colour 'dark' there are nevertheless a couple or three highlights that signify they're on top of things in the market.

Kicker for us is the new machine in Ridgeback's 'Road' range. The Cerium fulfils the usual practical on-road-for-best-value requirements of the three existing road bikes but then it goes off-tarmac too in the latest cyclo-cross style.

If the Radium (£749.99), Platinum (£999.99) and especially the Mercury with its elegant Reynolds 520 steel frame at £949.99 fulfil the role for a kind of letter-day gentlemanly ride-to-work aesthetic - they're all fitted with proper mudguards, dontcha know - the Cerium offers a more raffish look with a gnarly gussetted alloy frame in matt black, Avid BB5 discs and those trendy inboard brake levers on the handlebars that are actually pretty useful in both traffic and while shoulder-swerving through singletrack.

At £849.99, it lines up beside other such urban 'cross bikes as the new Whyte Kings Cross and Charing Cross we covered the other day  along with a tip-of-the-hat to long standing-protagonists like Kona's Jake, Specialized's various Crux models and the Genesis Croix de Fer.

In the same way that the Ridgeback 'Road' bikes get an extra model, its 'World' tourer sub-range adds a variant to the existing and very successful Panorama and Voyage models which continue with only a £50 price rise to £849.99 for the latter with the Panorama staying at £1,249.99. 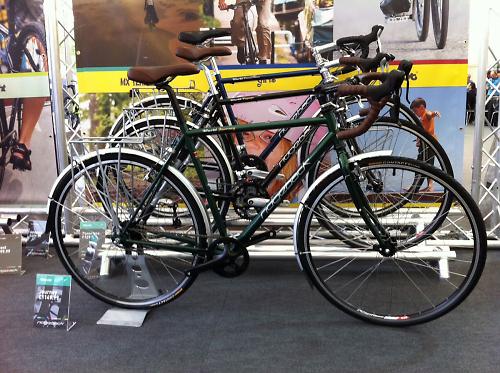 The new Journey utilised the same frame as the Voyage but instead of external dangly derailleur gears you get a neat and tidy internally-geared Alfine 8-speed rear hub controlled by Versa dual control gear-and-brake levers on traditional shallow-dropped touring handlebars. The price is £1,149.99, reflecting the relatively high price of the Shimano Alfine hub but regular commuters and regular utility riders who don't particularly plan to traverse the Andes will justify that with lower maintenance costs.

Ridgeback's deputy brand manager Chris Starling, however, is quick to counter that much of the inspiration for the new Journey's practical transmission comes from the bike that round-the-world record beater Vin Cox rode - the Croix de Fer from Ridgeback's stablemate brand Genesis - and that bike used a Shimano Alfine hub hauling proper touring loads over mountains as big as you like.