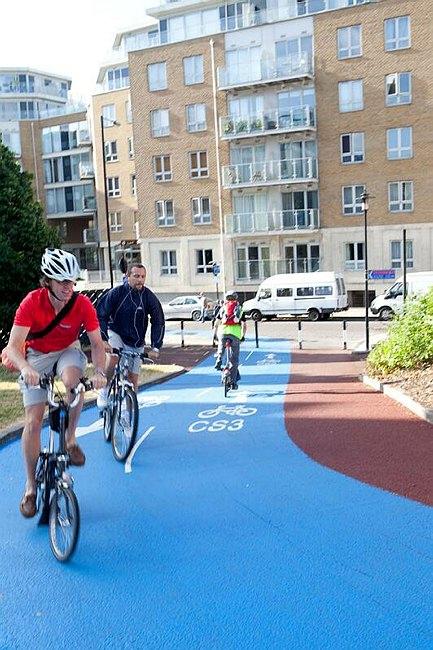 From today London has two more Barclays Cycle Superhighways, routes CS2 from Bow to Aldgate, and CS8 from Wandsworth to Westminister become fully operational today bringing the total to four. London now has one third of what is intened be be a 12 route radial network.

To coincide with the official opening of the new routes TfL today also releases new data which it says shows that cycling has increased significantly along the two pilot Barclays Cycle Superhighways which opened last year, and that 80 per cent of those using the Cycling Superhighways say that they make them feel safer using the road.

According to TfL cycling has increased along the Merton to City route by 46 per cent, and by 83 per cent along the Barking to Tower Gateway route – that latter figure may seem high but it also has to be remembered that part of the CS3 route runs along the busy A13 which probably wasn't heavily used by cyclists before the launch of the Cycle Superhighway..

TfL took pre and post-launch counts of cyclists were taken on a total of six occasions along the routes in 11 locations on the Merton to City route and 7 locations on the Barking to Tower Gateway Superhighway. TfL say that comparing the average counts for cycle journeys pre and post launch shows a 100 per cent increase in journeys for some sections of the route.

The Barclays Cycle Superhighways are along with the Barclays Cycle Hire Scheme the two flagship projects of the Johnson administration's London Cycling Revolution – neither have been without contoversey with critics accusing the Mayor of super-serving the centre at the expense of the suburbs.

The Cycle Superhighways go some way to answering that criticism reaching out beyond Central London. It does also have to be said that due to the intervention of the cycle-sceptic Mayor of Newham, Sir Robin Wales, the new CS2 Bow to Aldgate route is a rather truncated affair that for the time being at least doesn't get that far out of Central London stopping abrubtly at the Newham borough boundary - basically it's a straight run down the Mile End Road.

It will be interesting to see what happens at either end of this route, the purely anecdotal evidence that we have heard from Superhighway users is that while they like the routes themselves – the moment the blue paint runs out, cars resume their normal position on the road forcing cyclists out in to the traffic.

Part of the Mayor's reasoning for painting blue strips along some of London's major arterial routes was that it was a visible way of claiming space for cyclists on the city's roads and showing that their presence was officially backed - on the two existing Superhighways at least TfL's research suggests that this approach has worked – although we surely talking in relative terms here, as no doubt there are frequent incursions by motorised traffic on to the blue strips the argument being that at least those drivers doing so know they shouldn't.

Commenting on the launch of the new routes and the results of TfL's research in to use of the pilot routes, Kulveer Ranger, the Mayor of London's Director for Environment, said: "These vivid blue routes make the world of difference for cyclists on the streets of London, and prove a powerful and visible statement on our roads that assert to every Londoner, whether on two wheels or four, that the capital is a cycling city. Our pilot routes have proved a great success with lots more Londoners leaping into the saddle, and telling us they feel safer on the road. I'm confident our new cycle superhighways will prove just as popular. "

Certainly the Mayor and TfL have been keen to ensure that cyclists using the new Superhighways have as smooth a journey as possible with money being made available to the five boroughs along all the routes to invest in new cycling infrastructure and plenty of work done at junctions and roundabouts to try to ensure that all road can use the limited space available as safely as possible - there's a full list (provided by TfL) of the infrastructure works carried out along the two new routes at the bottom of this story.

According to the Mayor and TfL a record £112m will be spent on the cycling in the capital in 2010-11 on the Barclays Cycle Hire Scheme and the Cycle Superhighways, training, infrastructure, eduction and promotion - however the bulk of that money has now been spent, and the bulk of what has been spent has surely gone on the cycle hire scheme - the full cost of which is estimated at £140m. By comparison five councils are bidding for a share of £625,000 to spend on infrastructure such as cycle parking, cycle training and safety checks which businesses along the Superhighway routes can bid for.

While cycling is undoubtedly continuing to grow in London - TfL say cycle journeys were up by another 15 per cent last year on its road network - not everything is looking so rosy for cycling in the capital. TfL's controversial move to up the speed limit to 30mph along proposed changes to the road layout around Blackfriars station and on Blackfriars Bridge, and the Mayor's decison to let that happen have led some to question his commitment to his own cycling revolution and to suggest that TfL is at heart still as car-centric an organisation as ever.

Key route improvements for each route include (source TfL):

· CS2 – Bow to Aldgate:
- 12 junctions modified to improve conditions for cyclists (and pedestrians)
- 37 new or improved Advanced Stop Lines (ASLs)
- 23 road-side safety mirrors installed at junctions
- 27,000 m2 of road has been resurfaced
- 3000 m2 of pavement has been re-laid
- 9 km of new and improved cycle lanes, cycle track and blue surfacing