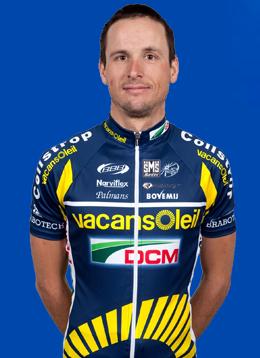 Vacansoleil-DCM rider Johnny Hoogerland has said that riding a stage of the Tour de France today was a lot more comfortable than trying to sleep in his hotel bed following the injuries he received in Sunday’s crash which led to him needing 35 stitches to cuts on his legs.

The Dutch rider was thrown from his bike and into a barbed wire fence in what is now a notorious incident caused when a France Télévisions car hit Team Sky’s Juan Antonio Flecha who, like Hoogerland, had been one of a five-man breakaway group.

Reflecting on today’s stage which he rode in the polka dot jersey of mountains classification leader, Hoogerland said: “Luckily I was not in the crash early today. I was able to put myself in the middle of a good group and although it was a heavy day, I got a lot of support from other cyclists and a lot of encouragement from the crowd, and especially great help from my team-mates – so thanks to all who helped me today.

The 28-year-old continued: “I think that surviving the stage today was largely mental strength. Today I felt better on the bike than I felt in bed or walking. It was a lot of adrenaline that got me through the day, I think.

Casting his mind back to Sunday’s incident. He said: “The only time that I really thought about stopping the Tour de France was during the two seconds that I was flying through the air... and then my thought was, ‘Oh! My God!’ But then, when I was lying there and I could move, my only thought was to get back up.

“It’s horrible to go through something like that,” Hoogerland added. “It’s been a dream of mine for 15 years to be in the Tour de France and then, when I get that chance, I take the mountains jersey, I was riding for a stage victory and then something like this happens. Watching the footage makes me very emotional.

“It’s the goal for the team to be in the front every day. It was perfect for Marco Marcato to be in the escape today and take the points that could have gone to others,” he concluded.

Meanwhile, another member of Sunday’s five-man breakaway group, Europcar’s Thomas Voeckler, has been reflecting on wearing the maillot jaune for the first time in seven years.

Voeckler took over the race lead from Garmin-Cervelo’s Thor Hushovd after finishing second on Sunday’s stage behind Rabobank’s Luis Leon Sanchez. In 2004 he spent ten days in yellow before being overhauled by eventual winner Lance Armstrong.

This year the popular rider is at least guaranteed a second day in the jersey, and even attacked on the day’s final climb to take the lone king of the mountains point on offer – he currently lies second to Hoogerland on that classification.

Talking of a six-man breakaway group that had got away early on today’s stage, Voeckler said: "It was an escape that was an escape royale for us, it suited us perfectly. No one in the breakaway was within a quarter of an hour of the overall lead. And so we hardly needed to work in the peloton. We needed to be alert and roll through when we had to but we didn’t have to sit up the front all day.

“As for my emotions, it’s true that the yellow jersey creates a lot of tensions, especially on the first day you wear it, but it’s also really fun,” he continued.

“At the end of the stage I was ahead because I rode the way I normally do. It’s not surprising to see myself and Philippe Gilbert on the front because we both have an aggressive temperament and that’s how we race.

“He is going a notch better than I am but we are attackers,” admitted Voeckler. “And there is no reason to respect all traditions – rather than let four guys who were just with me gain an advantage, I went with them.

“But then I didn’t have the legs to do any more,” he added. “I certainly spent a lot of energy the other day.

“For the next day days, well, you can’t look too far into the future but tomorrow I expec that the scenario could be similar to what it was like today. That would be ideal, so we’ll wait and see," he concluded.