Back to news
news
Features 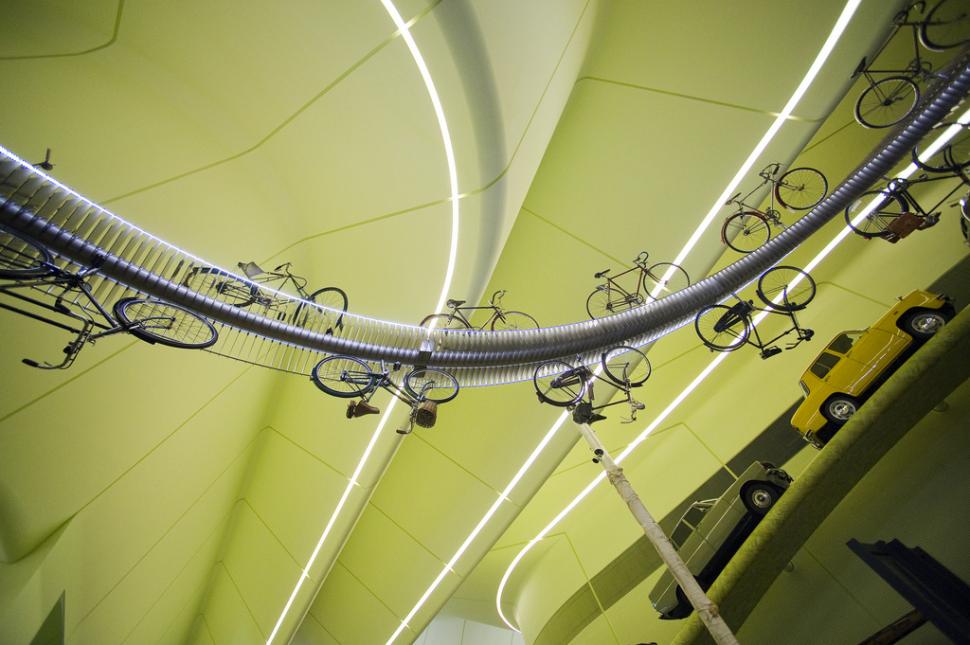 Last week the new Riverside Museum opened in Glasgow. The new £74 million Museum of Transport and Travel replaces the city's former Museum of Transport, the second most visited transport museum in the UK, with around 500,000 visitors a year. The Riverside is off to a cracking start, with some 63,000 visitors since it opened on 21st June, with more than 15,000 on Saturday alone.

The museum houses more than 3000 exhibits, covering the city and region's transport history, including steam locomotives, a wall of cars and several recreations of city streets from the turn of the last century onwards, one complete with subway station.

One of the most interesting exhibits if you ask us, though, is a cycling track with dozens of bikes in mid-air. At least three of the bikes have had famous owners too. Graeme Obree and Danny MacAskill were both invited to contribute to the museum's collection. Obree donated two of the bikes he built for the recent film of his life starring Jonny Lee Miller.

"They have the two bikes, Prop A and Prop B which I built for Jonny Lee Miller to ride in the film."

"They look just like Old Faithful, but some of the parts are different because it was for a film. I had to use some more regular cycling parts in case anything needed repaired or replaced, and they could easily have gotten replacement parts instead of trying to get new parts from a washing machine."

"This was a multi-million pound film and we had to make sure nothing went wrong."

Danny MacAskill has donated the Inspired Street Trial prototype he rode for his video Way Back Home and for stunt work in the feature film Premium Rush.

"I stopped using it after the movie because it took quite a beating in the film, and I try and replace them before anything goes too wrong. That bike has seen a lot of action."

Both riders managed to beat the rush by visiting the new museum ahead of its opening to the general public. No word as to whether they went by bike.

For more information on the museum visit Glasgow Life or to donate to the appeal www.riversideappeal.org