Ben Swift’s string of successes this season has been recognised through his inclusion in a strong Team Sky squad for next month’s Tour de France, full of riders able to make an impact on the race as well as supporting Bradley Wiggins general classification aspirations. The British ProTeam will also be changing its colours from its normal black and blue to black and green to support Rainforest Rescue, as it did in the Tour of Britain last year.

The team goes to France on a high, with Wiggins having won the Critérium du Dauphiné earlier this month while Geraint Thomas took the overall victory in the recent Bayern Rundfahrt, his first win in a multi-stage race. That pair, plus Swift, are the three British riders in the nine-man line-up.

Among the other riders named in the line-up are the Australian Simon Gerrans, one of a select group of cyclists to have won stages in all three Grand Tours, Edvald Boasson Hagen, who got two top three placings on last year’s Tour and the experienced Juan Antonio Flecha.

The other three riders named all joined Team Sky at the start of this season. They are the Colombian climber Rigoberto Urán, who provided vital support to Wiggins in the Dauphiné, Spanish mountains specialist Xabier Zandio, and German champion Christian Knees, embarking on his ninth Grand Tour. The 23-year-old Swift began 2011 in fine form, picking up two stages in the Tour Down Under and has since bagged a stage apiece in the Vuelta a Castilla y León, the Tour de Romandie and the Tour of California.

Possessing not only the speed to challenge for the win not only on the flatter sprint stages but also the strength to figure in trickier, uphill finishes, he could well be the man to claim Team Sky’s first Tour de France stage win.

Commenting on his selection, Swift said: “Competing in the Tour de France is what every young rider dreams of and I’m really excited about the challenge ahead. The team is riding well and we can’t wait to get going against the world’s best riders.”

He added: "As a child I used to dream of one day riding the Tour de France. I used to answer questions from the teachers at school with 'I will ride the Tour de France' and 'I want to be a professional cyclist'. They told me I had to work hard at school because it probably wouldn’t happen. That was my dream and this year I am so pleased that I get to live out my dream.

"Going to the Tour de France will be a very proud moment for me as it is something I have wanted to do all my life. To make it even better, I am going there in a British team, with a British rider that has a very realistic chance of finishing on the Podium. I hope to show myself in the sprints and try and beat my 3rd place stage finish that I had in the Giro 2009. Every time I pin my number on my jersey in this race, I will be filled with excitement. I am really looking forward to it, the team is riding well and we can't wait to get going against the world's best riders." 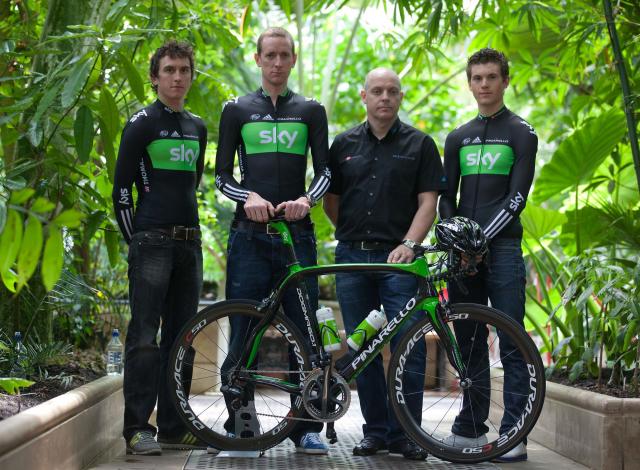 Team Principal Dave Brailsford commented: “I am delighted that Ben Swift will be making his Tour debut, he is enjoying a breakthrough season with five wins already and he will absolutely thrive on this opportunity to test himself on the biggest stage of all.”

Talking of the squad selected as a whole, he said: “This is a strong and balanced team with a real depth of talent to cater for all the challenges, from the team time trial to its high mountain finishes. The squad have raced and trained together consistently well and are full of confidence after excellent results at Bayern Rundfhart and the Critérium du Dauphiné.

“There is a great blend of experience and youth in our squad,” Brailsford added. “As well as riders like Bradley, Flecha, Simon, Christian and Xabier who have ridden the Grand Tours on numerous occasions, the line up also includes some of the peloton’s brightest young talents in Edvald, Geraint, Rigoberto and Ben. We have a really exciting team that can’t wait for 2 July.”

Bradley Wiggins, who two years ago finished fourth overall to equal Robert Millar’s best ever performance by a British rider in the general classification, said: “The team is in great shape, full of confidence and riding well. We all want to put on a good show for our fans as their support for the team throughout this season has been incredible. It’s going to be a great three weeks of racing.”

Last year Geraint Thomas was the real bright spot for Sky at the Tour figuring prominently in the first week and wearing the white jersey for the best young rider, this time around Thomas feels both he and the team have a lot more to offer.

"There is a definite change in the team this year. From the mentality of the riders to logistics, the team has moved forward, which has shown in the results. Hopefully this will continue.

"On a personal note I feel I’ve stepped up from last year so hopefully can keep that going through July.
I am also really excited to be racing the biggest race in the world with one of my best mates as well, Swifty. We grew up racing with each other on the pavements and around parks. So to be lining up with Swifty at the Tour, in the same team, with the aim of helping another mate and fellow Brit, Bradley Wiggins, to try to reach the podium in Paris is amazing."

As they did in last year’s Tour of Britain, Team Sky are taking advantage of the UCI rule that allows them to change kit for one race each year to highlight the Sky Rainforest Rescue campaign, this time on the sport’s biggest stage.

The initiative is a three-year partnership between Sky and the charity WWF and aims to help save 1 billion trees in the state of Acre in Brazil.

Commenting on the change of kit, Brailsford said: “As a team we saw the opportunity to change our bikes and kit to green as the perfect way to raise awareness of Sky Rainforest Rescue amongst the Tour de France’s millions of worldwide fans. The vital work that Sky, WWF and the Acre state government are doing to help save a billion trees is of universal importance and we are proud to be able to help support that effort.”

The change in colour scheme will see Team Sky’s normal blue replaced by green on everything from jerseys, sunglasses, and helmets to water bottles and saddles, with team vehicles also given a makeover.

Team leader Wiggins said: “Changing to green for the Tour de France is a fantastic opportunity to draw attention to a hugely important issue. Millions of fans around the world will be following the Tour this summer and I hope they join us in supporting Sky Rainforest Rescue.”

Colin Butfield, WWF’s Head of Campaigns, added: “It’s fantastic to see Team Sky’s world class cyclists like Bradley Wiggins get behind our work in Acre. We hope that with Team Sky flying the flag for the rainforest at the Tour de France, this will encourage a whole new audience to support our work through Sky Rainforest Rescue.”

The team is also encouraging donations to the campaign during the race, and sponsor Sky will match any money given pound for pound up to a total of £2 million to help reach the target of £4 million. It is also partnering with CO2Balance to work on projects aimed at offsetting the team’s carbon emissions during this year’s race, as well as aiming to reduce those emissions year on year.

Further information on Sky Rainforest Recue can be found in a dedicated section of the Team Sky website.