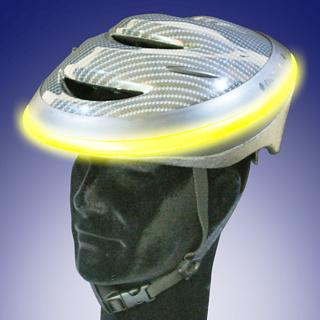 Gimmick, or an improvement to bike riders' safety? Let us know wour thoughts.....
by Simon_MacMichael

As you can imagine, we see some weird and wonderful products here at road.cc in our constant quest to keep you up to date with the latest offerings from the bicylcle industry. In our time, we’ve seen some strange helmets, and we’ve also seen some bizarre cycle lights. Never before, however, have we seen anything that manages to combine the two in the way the Angel Bicycle Helmet, now on sale for £49.99 at gadgets retailer Firebox.com, does (although the Haloglow Ice helmet comes close).

Firebox claim that six in ten road accidents involving cycling take place after 4pm and that poor visibility of riders ranks higher than rush-hour traffic as a factor behind that. They go on to say that while lights fitted to your bike can be obscured by vehicles in heavy traffic, there’s no such problem with the circle of LEDs fitted to the Angel Bicycle Helmet. The lights can be set to always-on, or flashing.

MInd you, extra visibility in nose to tail traffic aside from a legal standpoint you wouldn't want to be using the Angel as your only light source – the legality of sporting a ring of white light around your noggin as your only light source is debatable. To have a chance of passing muster on that score the rear part of the Angel's light would need to be red – rear lights should be red, the reasoning partly being that a white rear light can confuse other road users. So this is an extra light source rather than a replacement for sticking some lights on your bike.

The helmet is rechargeable from your PC using a retractable USB cord, although you’d probably want to remove it first, and is available in one size covering 54-61cm.

The market for the device, of course, isn’t going to be experienced roadies, but urban cyclists, possibly those new to cycle commuting, who want to make themselves as visible as they can to other road users. What it can’t do though is replace learning to ride assertively and claim your place in traffic to begin with.

So, gimmick, or much needed safety feature? Over to you to make your comments below.