Shiny kit from some big brands
by Mat Brett

So, we’re just back from a day visiting bike and accessories distributor Todays Cyclist, alias Moore Large, in Derby and we’ve seen all manner of good things, and we have the pics to prove it. Where shall we start? How about… Knog.

Knog’s Boomer LED lights are now available in a USB-rechargeable version (£33.99 front, £31.99 rear) – as you’ll know if you’ve been paying attention because we’ve already reviewed it. You just take the silicone cover off and whack the light straight into a USB port. No cable, no mount, no nuffink – you just dap it right on in there and it’ll recharge from flat in 2-4hrs. 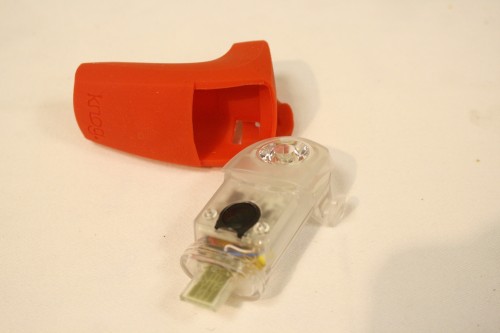 This version comes with the same tool-free fit as previous incarnations; you just wrap the stretchy silicone around your seatpost or whatever else is handy. It’s waterproof too. 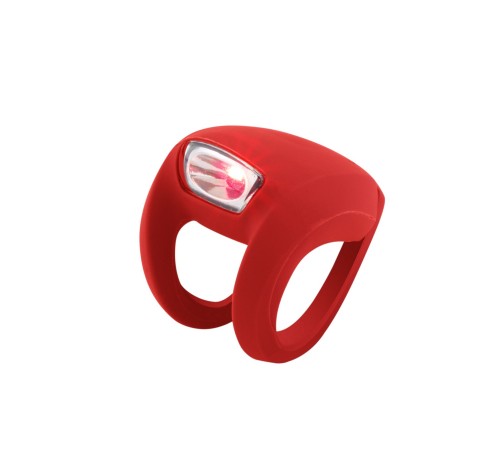 The diddy Frog Strobe (£9.99 front and rear) comes with a 25 lumen output and four different lighting modes. Like the Boomer, it has a flexible silicone body so it’ll fix in place really quickly, although it’s water resistant rather than waterproof. On the security front, Knog have a new chain lock called the Straight Jacket. Well, two new locks, really, because it comes in a Skinny version (£19.99) with a 6mm hardened box steel chain and a 38mm hardened shackle brass padlock; and a Fatty version (£25.99) with an 8mm chain and 50mm padlock.

There are a bunch of other products coming from Knog later in the year, including a Strongman lock that looks pretty interesting. It looks like a U-lock with the crossbar cut down so there are no sticky-out bits. Make sense? It’s rectangular, basically, so we’re guessing that’ll make it more difficult to whack open with a hammer. And when we say ‘guessing’ that really is a guess, although we’ll know soon enough because it’s with the Sold Secure people being tested right now. There’s also this little fella, which is a retractable cable lock. It’s on the way soon, as are as a whole load of new bags from Knog: messenger bags, handlebar bags, backpacks, panniers, saddlebags… the lot. These will be in addition to the existing Dog models, not taking over from them.

Proviz have got a whole stack of new kit, some of it already on sale, some of it available later in the year. The London-based brand kicked off just a few months ago with five products. Now they’ve got… six, seven, eight, nine… loads. The concept isn’t especially complicated; it’s practical, high-visibility gear aimed primarily – although not exclusively – at commuters. 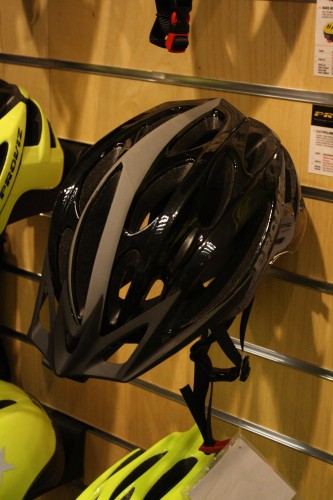 There are several helmets in the lineup, most of them fluorescent yellow although a black version is being added to the range for people who want something a little more subtle. Fear not, though, it has a huge amount of reflective print to get you seen – inconspicuous grey in daylight, all bright and shiny in car headlights. Along with various improvements to the existing bags, there are several new models coming too, including a messenger bag with reflective trim all over the place. You’ll get your laptop in there no probs. 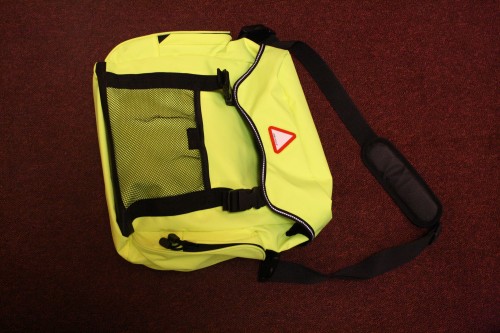 There’s a rack-mounted shoulder bag too. It looks a pretty neat design although it’s not available for a few weeks yet. We’ll try to get one in for review. There’s a roomy handlebar bag on the horizon too, again with a shoulder strap for carrying it off the bike. It has pockets and compartments for squirreling everything away, and it looks really well made. 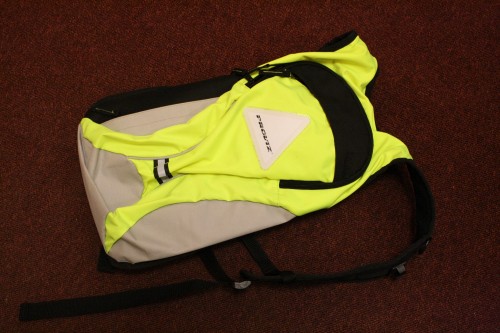 Some of the bags have electroluminescent (that’s the longest word you’ll read today) panels, powered by batteries held inside, to help you get seen at night. They really do shine out in dark and low-light conditions. 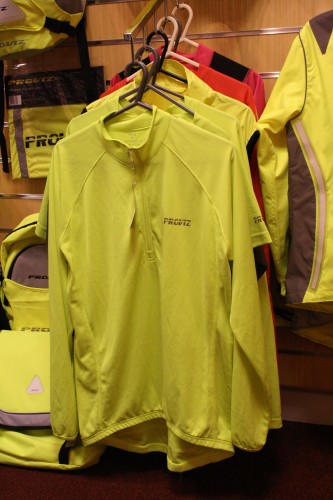 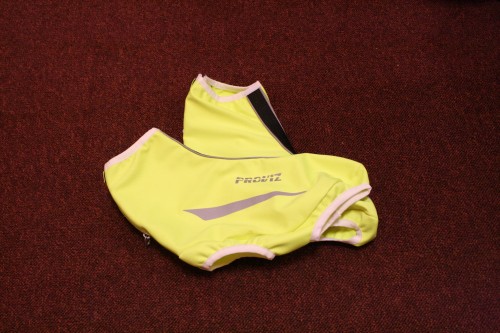 They’ve also got over-shorts, over-trousers and overshoes coming too, so if you’re a fan of wearing yellow stuff over the top of other stuff… well, you’re in for a treat.

As for Lake road shoes, we reviewed the lovely top-of-the-range CX401s a few weeks ago and we reported on the range a few months back, so we’ll just give you a top five interesting Lake facts here…

1. The top two road models (the CX401 and the CX330C, £199.99) are available with Speedplay fittings, so you don’t have to fit that funny little 3-bolt Speedplay spacer before mounting the cleat. 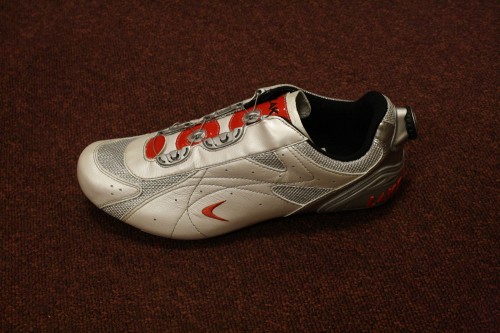 2. These two shoes are made from supple kangaroo leather.
3. Several shoes in the range are available in half sizes.
4. Lake shoes have a slightly wider forefoot than most brands, but if that’s not enough for you, a few of the models are available in wide-fit options. 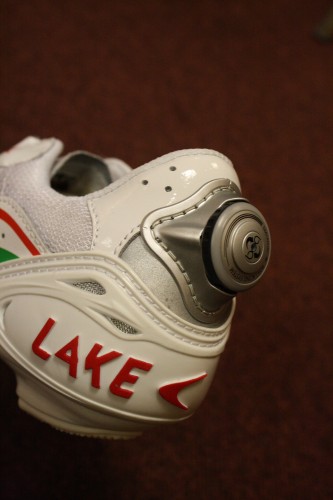 5. Most of the Lake shoes use a Boa micro-cable closure system that has a lifetime warranty. It’s a super-strong cable that you wind in via a little dial. 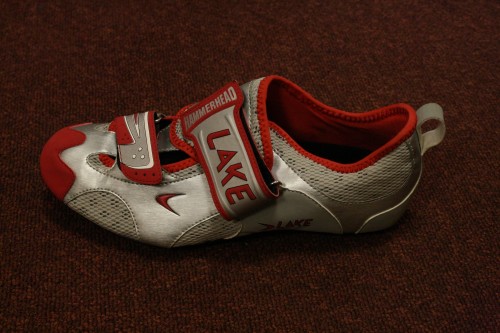 Apart from the soles, they’re exactly the same, with a NuFoam breathable upper and an antimicrobial liner. They have a real high-quality feel to them although we’ve never taken either pair for a spin.

Where are we at with Limar’s Pro104 Ultralight helmet? Were they claiming 160g before? We can’t remember. It might have been a few grams more. Either way, that’s what they’re saying now. 160g. That’s not very much. In fact, as they print across the top, this is ‘The world’s lightest helmet’. Allegedly. Like all Limar helmets, the Ultralight comes with a bug net to stop creepy crawlies getting inside your wig, and a twisty-turny dial around the back to adjust the fit. We don’t find it grabs the back of the head as securely as some other options out there but you might. You’ll have to try it and see. It costs £119.99. 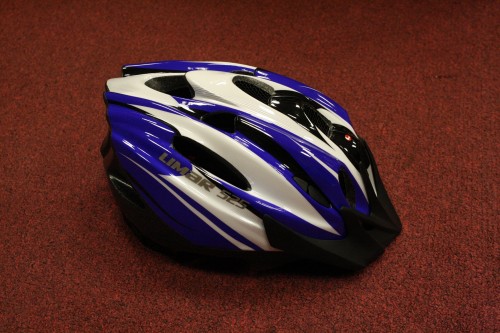 All Limar helmets are in-moulded (the polystyrene inner and the shell are moulded together rather than being produced separately then glued together) and they’re all pretty light. The £47.99 650, for example, weighs just 250g while the 635, which will cost you £39.99, hits the scales at 260g. Not that we’re saying less material is necessarily better when it comes to protecting your swede, but they obviously pass all the safety standards, so who are we to argue? 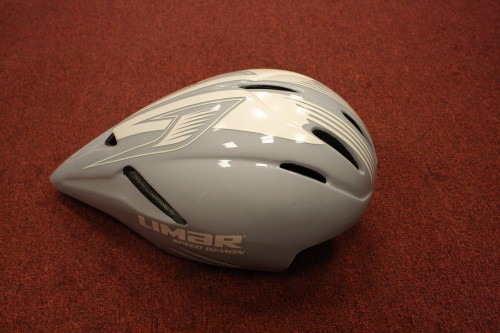 There’s a new time trial helmet in the Limar range for 2011 in the shape of the Speed Demon. Available in carbon or silver finish, it costs £139.99. Limar eyewear is also coming to the UK for the first time – interesting in that fellow helmet-smiths Giro have just exited the specs market, for the time being at least. There are several different designs available with strong polycarbonate lenses and various different levels of light transmission.

The OF7 (above, £63.99), for example, has three pairs of interchange lenses with anti-fog coatings, along with an adjustable rubber nose pad and adjustable arm tips to hold them in place.

The OF8 is more expensive (£79.99) but you get photochromic lenses here – the tint changes when exposed to UV rays. Limar reckon the amount of visible light they transfer varies from 49% down to 11% according to the light conditions. They’ll change from light to dark in 8secs, and back again in 35secs.

We’ve covered the Forme range of bikes previously so we won’t go back over the same ground again, but it’s worth reiterating that it looks like you’re getting excellent value from this British marque. There’s a lifetime guarantee on Forme-branded product too. They now have 21 models in the market, and plan to increase their premium road line later in the year and expand into cyclocross too. 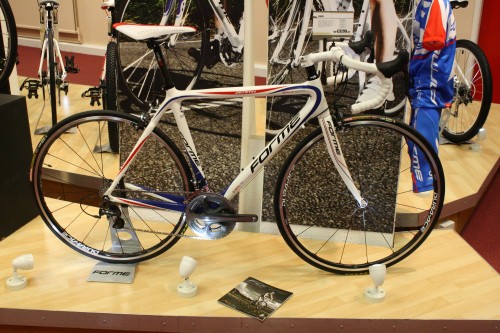 Forme are just about to launch a new Professional Academy too, mostly comprising under-23 riders who are going to be living and training as a team in the Peak District. They’ll be racing the Premier Calendar and are starting Continental racing with the Tour of Croatia.

Basso bikes: pretty, aren’t they? The Italian range is unchanged from last year with the Diamante as the flagship model. It’s a carbon monocoque with a BB86 bottom bracket, tapered head tube (1 1/8in up top, 1 1/2in at the bottom), and one of the deepest front end junctions known to man. It’s a beautiful-looking piece of work that’ll set you back £2,699 for the frameset. If you don’t have that kind of wedge floating about, how about the Laguna? It’s another carbon monocoque (T700) with a full-carbon fork. It comes in your colour and everything and can be yours in a Campag Veloce build for £2,099. Tell your better half road.cc said it would be fine.

Velo Senso saddles are interesting. The men’s version of the Milo (£43.99) comes in a honeycomb design – it’s completely perforated, meaning the shell flexes quite a bit and it also lets air through for breathability. There’s gel padding in there and the rails are titanium, and it weighs in at a claimed 258g. 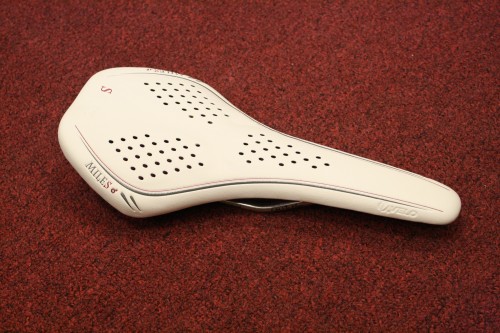 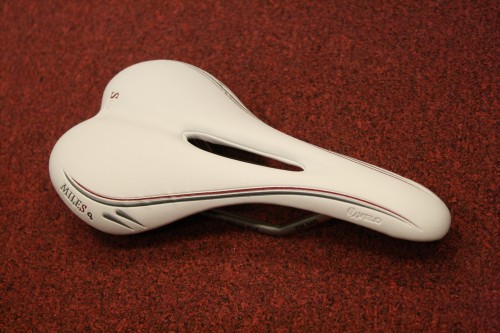 Todays Cyclist are also distributing Exspider (that’s spider as in arachnid) bags now, which are new to the UK market, all the way from Taipei. There’s all sorts in the range from little phone holders to big backpacks and some of the models have built in LEDs. We’ll ask to get some in for review. Should be worth checking out. 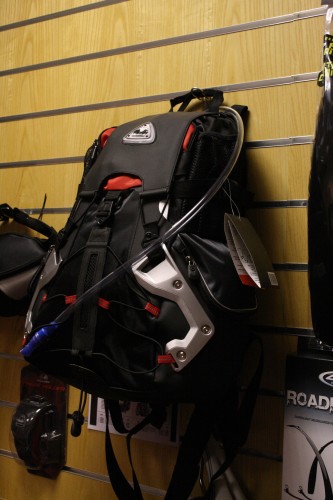 To see the whole Todays Cyclist range, get yerself along to www.todayscyclist.co.uk, except for the Bassos – they’re at www.bassouk.com.

1
Mark Cavendish wins third stage in three days – but huge crash causes barriers to disintegrate (+ video)
2
Near Miss of the Day 571: Driver makes very close and fast pass on cyclist descending country lane (includes swearing)
3
Arrest made after Sussex cyclist injured in serious assault
4
Win! 5 anti-theft GPS tracking Alterlock units to be won worth £114.99 each
5
Endura pays tribute to sales manager Simon Richardson, killed in bike crash on easter Sunday
6
Near Miss of the Day 570: Van driver Must Get In Front of group of cyclists
7
Two wins in two days for Mark Cavendish (+ video)
8
BBC corrects Nick Robinson’s comment that “you cannot use your car” in a low traffic neighbourhood