7
10
Bright, useful, stylish and easy to charge, but the mount can slip
Weight:
40g
Contact:
www.todayscyclist.co.uk
How we test

Bright, brash and now USB chargeable, Knog’s Boomer is certainly bright enough for city and suburban streets and dark lanes with reliable output and charge-times- it even survived five minutes continuous onslaught from the garden hose but so do many others and the silicone bracket is neither secure, nor particularly versatile when it comes to mounting the rear version tested here – we've also included technical details of the front though because USB recharger apart it is identical to the Boomer front light we've already tested.

What we have here is the brand’s well known silicone sheath (pink, blue, red, white, black and grey are all available) embossed with the Knog logo. The rear is designed to slip around the usual complement of seatpost diameters but the clasp was prone to coming adrift, requiring some gentle patting to remain seated around narrower 26.0 to 27.2 types. Annoyingly the Boomer doesn’t readily entertain rear rack or accessory mounting. The front mounting is a similar wrap-around affair for your handlebars, which will handle standard and oversized units. The guts of the unit, that USB connector, are tiny-smaller than your average memory stick, proudly on display through a clear casing. 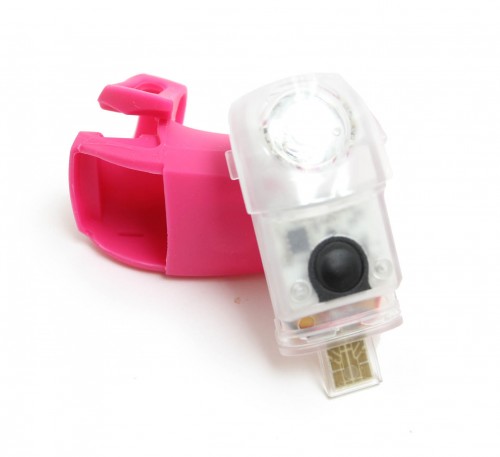 It's that USB connection that sets this new version of the Boomer apart from its non-rechargeable predecessor. It docks straight into the computer port, the end is protected from dirt, damp and the ingress of water by a polymer cap and a full charge takes roughly four hours. The fact that you can stick the Boomer straight in to your computer to charge it sets it apart from competitors such as the Blackburn Flea and the Electron Backupz USB – both impressive lights (particularly the Flea) but both dependent on small and all too loseable adaptors – we know because we've lost the one for the Flea, a light which is partiuclarly fiddly to recharge. That's not the case with the Boomer, it plugs in easily to a desktop, laptop or a USB adapator and because it's small it should fit between anything else you've got plugged in at that back of your computer - something that can be a problem for bigger lights with built in USB connectors.

The Boomer lamp consists of a high-powered central LED pumping out a claimed 55/30 lumens (front/rear) with two smaller siblings either side on the rear for improved peripheral visibility. Engaging the light and toggling between the four (strobe pulse, random strobe, steady) modes can feel remote, especially in heavily padded winter gloves but is easier than I expected from the saddle. 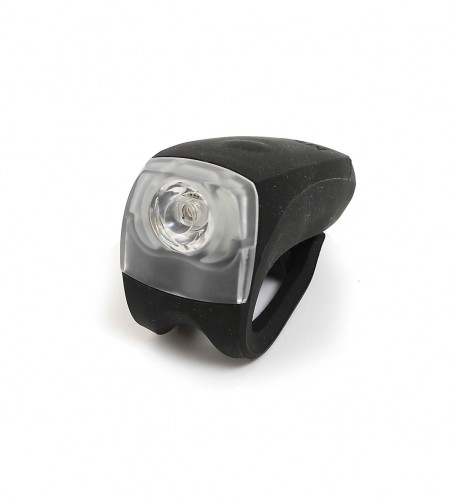 Output is generally very good with a very bright beam, see below for our comparative graphs of the front light. It's not as bright as the Blackburn Flea at its centre, but with a useful beam spread (wider than the Flea's) in all modes -easily sufficient for round town and okay for the odd rural lane; simply adjust the settings to suit purpose and/or economy. Weather seals are fairly robust, surviving a really concerted blast from the garden hose and repeated, torrential cloudbursts alike, although it's important to make sure that the silicone housing is properly seated. Anecdotes suggest the earlier generation were susceptible to vibration, causing erratic shut-downs/start ups but to date, regular and spirited green laning (which is a hard test for what is basically a commuter light) has had no obvious effect on this one. 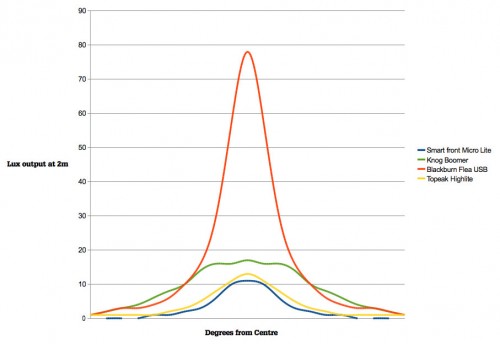 Our rear light has seemed prone to annoying phantom engagements in pockets and bags, although we had the same issue with the non-USB unit front light we tested. and Knog assured us it was a faulty batch, replaceable under warranty. That's the most likely explanation here too – this is an early production light as was our previous test model. Another possibility is that this this could have inadvertently been caused by one of the USB Boomer's clever features, its in-built battery protection. This light uses a Li-Ion battery and which if you are not going to be using it for extended periods of time is best left at 50 per cent charge to preserve the battery life. To help you knock it back to 50 per cent in these situations simply charge the light up to 100 per cent and hold the button down for five seconds which turns on the light and shuts it off when the battery runs down to 50 per cent. Clever, but possibly too clever if this is why it turns on when shoved in to your bag with a load of other commuter gubbins.

On list price the Boomer stacks up pretty well against the competition, the Electron Backupz we reviewed recently being £34.99 list although it could be found for a lot less online – something which could also be said about the USB Boomer's non-rechargeable sibling which lists at £24.99 but can certainly be found for a lot less than that. The front Boomer USB is a couple of quid more than the rear, at £33.99. Given that these type of lights are so often discounted it is harder to judge them on value, although we would say that judged on their list price all of the USB rechargeable back up lights are pricey.

Undeniably bright, stylish lights that will certainly get you seen - drops a mark for repeatedly turning itself on when carried in a bag, and while the price isn't out of line with other USB rechargeable back up lights, and the all round performance better in terms of useable light and ease or re-charging - the price of all these lights is quite high. A good light though, not with the out and out brightness of the Blackburn Flea, but with a wider beam pattern and a much easier re-charging process, the absence of a road.cc review of the Blackburn Flea USB is a tribute to how easy it is to lose the Flea's recharging adaptor...

25% BRIGHTER THAN OTHER HI-POWERED MINI LIGHTS ON THE MARKET

Would you consider buying the product? Possibly