For 2011, Moore Large have expanded their Forme range massively to include urban bike, hybrids, and mountain bikes alongside an enlarged road bike lineup. Previously, there were only five models – all road bikes priced from £500 to £1000. Now there are over 20.

What they all seem to have in common, though, is a big focus on practicality. The cheaper road bikes come fitted with mudguards, for example, and Forme have designed a little extra length in the head tubes for a more comfortable ride position.

On paper, they also look remarkable value for money. A new British brand competing in the same market as established names like Specialized, Trek and Giant has to do something to get noticed. They can’t win buy-ability on heritage or prestige, so they’ve got to do it on price… which is good news if you’re after a bargain.

The existing road bikes have had their geometries updated for 2011, with longer head tubes to give a more upright, sportive-friendly ride position than before, rather than going for a pure race bike setup. All the sub-£1000 models are aluminium – 6061 alloy on the three lower priced ones, triple-butted 7005 series on the more expensive options. The frames have been source from Kinesis and come out of the same factory as many of the big name brands out there, so we’re guessing that you’ll not need to worry about the quality.

The entry-level road bike is the £575.99 Rapide (above) which, unlike last year’s version, comes with 3K carbon fork blades and Microshift STR80 shifters. Two small gear levers tucked behind each brake lever take care of changes. We’ve used a more expensive Microshift model that works in the same way and actually find it easier to use than Shimano’s lower end thumb-operated offerings.

The compact chainset is a Truvativ Touro, Tektro’s R310 callipers do the stopping, and mudguards come fitted as standard – which makes a lot of sense because we can imagine a lot of these bikes are going to be pressed into service as all-weather commuters. You don’t get rack mounts, though.

We like the look of the Vitesse too. At £999.99 it’s available through your employer on most tax-free Cycle to Work schemes and it looks like excellent value. The welds on the triple-butted alloy frame have been smoothed so you get a really slick appearance – you’d be forgiven for thinking the frame is carbon – while Shimano 105 components, a Truvativ Elita compact chainset and Tektro R540 brake calipers are all strong performers at this price point.

The £1499.99 Victeur is going to be popular for its value as well. It’s the cheapest Forme bike to come with a carbon frame – T700 12K carbon fibre, to be precise. Like all the Forme frames, it has a lifetime guarantee which shows the manufacturers must be pretty darn confident on durability. The One23 components that make up the finishing kit across the range get the same warranty. The top line bike in the range is the Zenith Team. The frame, again T700 3K carbon, hits the scales at an impressively lightweight 980g and it gets a cool finish too – white with red and blue swishes and swoops. It’s dripping with Shimano Dura-Ace finery right down to the carbon 7850 wheels. Priced at £3299, it’s looking like a massive bargain from here although, it has to be said, we haven’t so much as ridden it around the car park, so we reserve the right to take that comment back at any time! Forme have included a ladies road bike in the lineup for 2011 in the shape of the £749.99 Finesse. The double-butted alloy frame comes in a non-girly white finish and you get matching mudguards and FSA Omega chainset. It looks great. That chainset is a triple to give a broad range of gears and the rest of the drivetrain components are Shimano Sora – solid, workmanlike stuff. 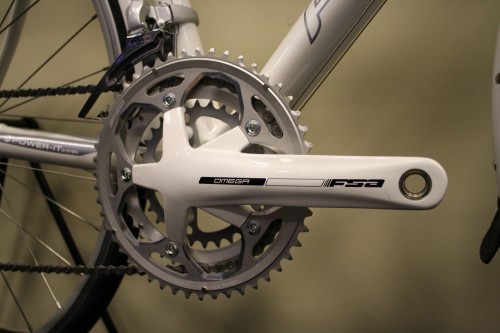 Forme’s new Urban range looks interesting too, including four bikes priced from £429.99 to £649.99. They’re all aluminium with triple chainsets and seem to have been built to handle the knocks. The top end Alfresco comes with Shimano Deore gears and hydraulic disc brakes – looking good for the money – while the women’s Chic (£449.99) has a manipulated top tube to lower the standover height and comes ready-fitted with mudguards. The groupset is Shimano Acera based so, again, it’s a highly competitive price for the level of kit you’re getting here. Oh, one other thing that’s worth noting: a proportion of the money you spend on a Forme goes towards Marie Curie Cancer Care. The amount varies according to the bike you buy, but it adds up across the range. We could be wrong but we can’t think of anyone else who’s doing anything similar.

For more info on the Forme range go to http://www.todayscyclist.co.uk or www.formebikes.co.uk

1
Mark Cavendish wins third stage in three days – but huge crash causes barriers to disintegrate (+ video)
2
Near Miss of the Day 571: Driver makes very close and fast pass on cyclist descending country lane (includes swearing)
3
Arrest made after Sussex cyclist injured in serious assault
4
Win! 5 anti-theft GPS tracking Alterlock units to be won worth £114.99 each
5
Video: NSW driver chucks coffee cup at cyclist, tailgates him through stop sign and flips the finger– so of course, the Daily Mail asks “who’s in the wrong?”
6
Complaint against Daily Mail upheld over false claim that campaigners wanted “abuse of cyclists to be made a hate crime”
7
Video: Driver calls 999 to report cyclist for not getting out of her way
8
Brompton reels from impact of Brexit and Covid