Shimano have announced that their Tiagra groupset is to go 10 speed for 2012. That was the big news from Shimano's new product presentation held a couple of weeks back… well, the news we're allowed to tell you about right now.

They also announced new cyclo cross components, the roll out of the Di2 Satellite shifter for sprinters, and a new colour for the Ultegra groupset - Glossy Grey. Feast your eyes on our gallery of shots with more to come in the morning when we fish that pesky Shimano memory stick with even more product shots on it out from where we left it in the office.

Ten speed comes to Tiagra seven years after it was first launched by Shimano. The new Tiagra 4600 gruppo brings Shimano's mid-range workhorse in to line mechanically with the company's higher end offerings. Tiagra 10 speed is officially compatible with all of Shimano's other 10-speed mechanical groupsets, giving manufacturers another mix and match option even if Shimano also continue to maintain that their groupsets work best when used complete. Shimano say that the aim of their latest version of Tiagra is to give enthusiast riders – whether they be racers, tourers or sportive/fitness riders – a durable easy to use, easy to maintain, and easy to adjust groupset that brings the advantages of 10 speed gearing further down the price points. It will, we are promised, be "competitively priced". SRAM have pitched their Apex groupset somewhere between Shimano's Tiagra and 105, at least on OEM pricing; in fact, aftermarket it is usually priced higher than 105 and we're guessing that for the lucrative original equipment market SRAM are cutting their margins considerably. 4600 is Shimano's response.

10-speed Tiagra 4600 comes with the choice of three different drivetrains: a 50-39-30 triple with a 12-30 cassette for touring; or a 50-34 compact and 12-28 rear cassette for performance/sportive riding; or a 52-39 front chainset matched up to a 12-25 rear cassette for racing. Shimano were at great pains to point out the advantages of the Tiagra triple over another un-named manufacturer's compact double and 12-32 combo. Who could they mean? Oh yes, SRAM and their new Apex group. What's interesting here is that Shimano are marketing the Tiagra triple option as a touring set up whereas SRAM are selling the Apex 12-32 compact double as the ultimate get you up the hill sportive set up – you could argue that Apex is a standard 9-speed with the granny ring moved to the back and the advantage of a narrower Q factor as a result. Either way it is pitched firmly at the sportive/performance cyclist side of things where, according to Shimano's positioning of its new groupset it is actually up against the Tiagra 10-speed compact double 12-28. Either way the comparison between the triple and the 12-32 double is an interesting one and if you don't like jumps in your gearing and you do want as wide a gear range as possible it's got to be worth considering whether you are a tourist or a sportive rider. After all triples seem to be good enough for those old French blokes that usually ride past British roadies a hairpin or two below the summit on alpine climbs.

That extra cog at the back means that pretty much all of the rest of the drivetrain and controls have to change too. Tiagra 4600 uses one of Shimano's new 10-spd directional chains (the logo on the cageplates should be facing out) except for the triple which presumably sticks with the old chain.

There are two new rear derailleurs a short cage version which will take a max 34T and a longer cage option that goes up to a 38T for the triple. 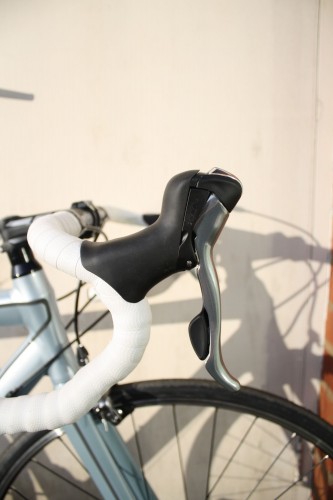 The STI levers are all new units too, although we'd suspect the internals are going to very similar to the last externally cabled versions of 105 - smoother easier shifts are promised.. There are double and triple speciific levers and as with previous incarnations of the Tiagra groupset these feature gear indicator windows on the top of the hoods. Those hoods have been re-modelled too and are now closer in shape to their higher end siblings. For ease of maintenance and adjustment the new levers opt for externally routed cables rather than taking the under the bar tape route now favoured for the higher end groupsets. Shimano say this gives an easier cable run, again facilitates ease of maintenance and ajustment – all the shifters feature a barrel adjuster where the cable exits the lever. Were we cynical types – we'd also suspect that taking the external route also leaves room for an upgrade to hidden cabling in a couple of years, probably around the time that Sora finally goes 10 speed – luckily we're not . 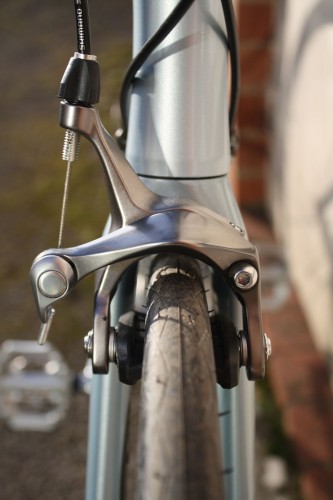 Tiagra 4600 also gets new brakes too, which are also compatible with their higher end sibling in the 105, Ultegra and Dura Ace ranges. These brakes featuring an easier wheel release and toe-in adjustment.

There are two new Tiagra hubs with a choice of either 32 or 36 holes.

The Tiagra drivetrain is a staple of flat bar road bikes and with that in mind Shimano have also introduced some Tiagra flat bar levers and brakes, which makes sense. In the same vein there is also a new non-series of flat bar levers pitched at Ultegra level and compatible with all Shimano's higher end groupsets.

Availablilty? Shimano say that the double version of Tiagra 4600 should hit the market in June with the triple close on its heels in July.

The big news on Ultegra, for the moment at least, is a new SPD-SL carbon pedal - it's got the same body as the Dura Ace carbon pedal but with an Ultegra level axle – for that read "heavier" mind you, at a claimed weight of 265g for the pair we're talking relative heft. The current Ultegra 6700 pedals (which will still be available) weigh a claimed 314g. The other Ultegra news is a new colour, glossy grey for the chainset, and front and rear mech. Why? Because. On the subject of aesthetic changes old faves the RS80 wheels get a makeover too. The WH-RS80A-C24 will be available in May and the new look Ultegra in June.

Cyclocross gets some love in the shape of two new component series, CX70 pitched at the higher end at roughly the same level as the Ultegra/Dura Ace road groups, and CX50 at a Tiagra/105 level.

CX70 comprises a Hollowtech II 46-36 chainset, cantilever brakes with cartridge brake shoes which will accept road pads too and with have toe-in adjustment as well.

CX50 has a two piece chainset with the same 46-36 gearing, and it's own cantilever brakes. It's available in black and silver - the standard colours for Shimano's MTB groupsets. Both new 'cross component sets will get their own compatible front mechs and there will also be an optional canti-specific cable adjuster, (SM-CB70).

CX70 components should be available from August 2011 and CX50 from October.

As well as revisions to their name groupsets Shimano also rolled out some new non-series parts and some extras to existing gruppos. Kicking off with the non-series stuff there will be a new higher end long drop caliper brake that will be compatible with road groupsets from 105 through to Dura Ace – we're guessing in response to the growth in higher end do it all type bikes with a performance edge to which riders want to fit full mudguards.

Tandeming gets some love too (and no, we aren't going to use that as an excuse wheel on our ropey tandem stat) with two new chainsets - we'll post some more details on them asap.

Finally, and it's not often Dura Ace Di2 gets left until last, Shimano were showing off their new Di2 satellite shifter - the sprinter's button, we're thinking of it as the cycling equivalent of the turbo boost (erm, but in a good way). Shimano clearly feel that there is room for this sort of technology at the competitive level at least, last year they unveiled their Di2 bar end satellite shifter. 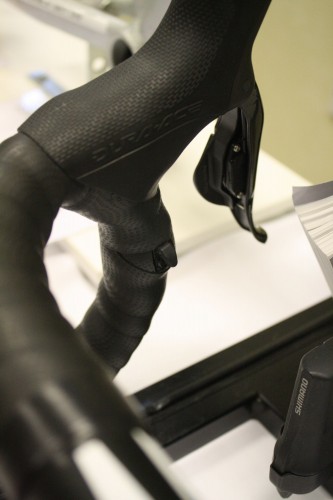 The button is a simpler affair to look at, basically it's two buttons (up and down) mounted inboard just below the lever hoods on the left and right so the sprinter can wham through the gears without changing their hand position while in the heat of a sprint. In fact the button can be mounted anywhere on the bars and could just as easily be adapted for a climber so that its in that sweet spot on that preferred sweet spot on the bars used when attacking on a climb or possibly when working the gears and trying to stay in the zone on the steeper ramps of a climb. One day all of us will have, for optimum commuting/touring/sportive/audax/just messing about on your bike power. One day soon hopefully.