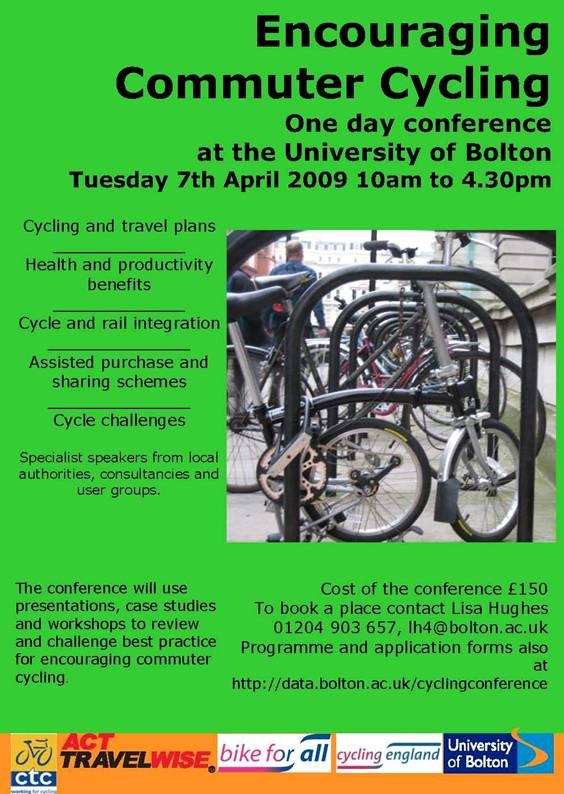 There are still places left on the upcoming one day Encouraging Cycle Commuting conference at the University of Bolton on 7 April. The conference is the fourth in a series of cycling themed conferences to be held at the university.

Among the topics being covered will be: Cycling and travel plans; Health and productivity benefits; Assisted purchase and sharing schemes; and Cycle challenges. A range of speakers from local authorities, Cycling England, CTC, the London Cycling Campaign, and Transport for London will be their to give their views.

One eye-catching piece of research that will be presented is by public health consultant, Nick Cavill who recently looked at the economic and health benefits of cycle commuting for Cycling England. His findings won't come as a surprise to many road.cc users – regular cycle commuters work harder.

Talking about his research he told the Manchester Evening News: "There is some pretty good evidence that cyclists have lower levels of absenteeism. It is pretty obvious that fitter people are healthier and have fewer days off due to sickness.

"Studies in Holland, where cycling is extremely popular, showed that cyclists 7.4 days off a year compared to 8.7 days off for non-cyclists.

"It is difficult to measure at quality of life but there is a lot of anecdotal evidence to suggest stress levels are much lower in people who cycle to work."

At the conference Cavill will be talking about work he and his colleague Dr Harry Rutter undertook for the  World Health Organisation;  a computer model, the Health Economic Appraisal Tool (or HEAT), which helps councils to assess the economic benefits of building a particular cycle route by calculating the savings in health costs that it will produce. The model was designed by Dr Harry Rutter and Nick provided input particularly into reviewing the existing evidence (see http://tinyurl.com/d3bjqe).

Speaking to road.cc Mr Cavill said: "Whoever commissions and pays for the work, it all comes together to be good news for cyclists and should help to provide the economic arguments that planners need to get schemes approved. We are delighted that the model is being used by the Dept for Transport in the UK and in a number of European Countries already."

All this follows on from the Cycling England report published at the weekend (and reported here) that council's were failing to recognise the true economic benefits of building cycling facilities.

Cycling England's case is that when all the benefits of cycling are added in to the planning equation investing in two-wheeled transport becomes a very cost effective option.

The cost of the conference is £150, for more information or to book a place contact Lisa Hughes on 01204 903 or email: lh4 [at] bolton.ac.uk. You can also get a programme and appliction form at http://data.bolton.ac.uk/cyclingconference