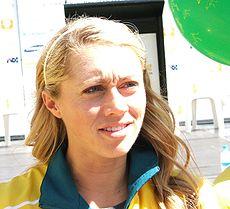 Australian "not out of the woods" following brain injury...
by Mark Appleton

Australian former world champion rower Amber Halliday who switched to cycling in 2008, is making some progress in the wake of her horrific bike crash earlier this week reports the ABC.

The 31-year-old, who was taking part in Stage 2 of the Tour Down Under-affiliated Rendition Homes Santos Women's Cup.in her native Adelaide on Monday, remains in the intensive care unit at Royal Adelaide Hospital after crashing heavily on her face and shoulder.

She sustained severe head injuries when she fell after clipping another rider’s wheel, suffering bleeding on the brain, a damaged eye socket and a broken arm.

Today, her boyfriend, Mello Bouwmeester, has issued a statement which is cautiously optimistic.

"Amber is fighting strongly and we hope for some positive news tomorrow," he said.

"She is breathing by herself and is out of sedation, she's still in ICU. We just have to be patient as she rests and heals herself. Please again keep the positive thoughts and energy heading Amber's way."

"There is an ever so small improvement in her condition, but it's a positive sign," he said.

"Amber is being taken off her sedation slowly and breathing without assistance. She's still in a critical condition, stable and responding at this time.

"Yes, some good news, but Amber is not out of the woods just yet."

He also said that prior to the stage, Halliday had expressed her concerns to race organisers about the course in Adelaide’s Victoria Park.

"She was really quite nervous . . . she went into the race with some trepidation," he said.

Based on a Twitter post earlier on day of the crash, the athlete appeared well aware of the dangers she faced in what she predicted would be a physical, fast-paced race.

She tweeted: “Getting ready to race again. Short 30min race yest[erday] was very aggressive. 50mins tonight will probably be equally so!” She concluded the tweet with the hash tag “#ouch”

Halliday was not selected to represent Australia at last year’s World Championships in Geelong and having become disillusioned following a failed appeal against her non-selection, was believed to have been contemplating returning to rowing in a bid to compete at London 2012.