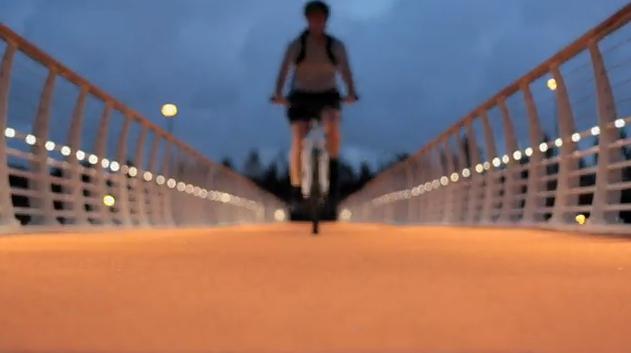 Sustrans reveals winners in My NCN video competition - and here they are!

A Cardiff commute, two teens out and about on their bikes, and an engaging animation scoop prozes
by Simon_MacMichael

Sustainable transport charity Sustrans has announced the winners of its My National Cycle Network video competition, with the adult category scooped by a Cardiff cyclist who produced an evocative film charting his daily commute along the Taff Trail through the heart of the Welsh capital.

For his efforts, Steve Castle from Penarth wins a holiday for four in a Forest Holidays cabin and will be able to choose from six locations on Forestry Commission land in Cornwall, North Yorkshire, Gloucestershire and Scotland.

From Steve’s film below, which we assume given the direction he travels shows his trip home, you’d hardly know he was cycling through the centre of the vibrant Welsh capital in the first part of his journey, starting in the shadow of Llandaff Cathedral before joining the Taff Trail running through Bute Park alongside the river from which it takes its name.

Things change once he passes under the Castle Street bridge, his ride taking him past the imposing Millennium Stadium and down into the regenerated Cardiff Bay area and the trip has to rank as one of the more pleasant commutes we’ve seen – helped, of course, by it being beautifully shot on a Canon digital SLR, showcasing its abilities to capture HD video as well as still photos.

According to Sustrans, Steve’s film shows “how enjoyable and easy an everyday trip into work can be and how it takes him through beautiful areas of Cardiff and keeps him away from those traffic jams,” and the prizewinner is himself a recent recruit to commuting to work by bike, as he reveals.

"I'm new to cycling to work but once I started I really enjoyed it and now I'm a total convert,” Steve explains. “Cardiff is a small city and so easy to get across by bike. It's so enjoyable - and a lot less hassle than trying to get a car around. I never thought the film would win - it was just a lot of fun to do. I hope it shows other people how enjoyable and easy it can be to commute by bike.”

The creator of the entry judged best in the 11-17 category Louis Clark from Bristol, won’t have to travel too far – accompanied by three friends – to enjoy his prize of four VIP tickets to the Relentless NASS Action Sports and Music Festival taking place in July at the Bath & West Showground in Somerset.

His film shows Louis enjoying a day out on the bike with his friend Erik, which Sustrans says shows “the adventure, freedom and enjoyment they get out of getting out on their bikes and exploring the network.”

Louis says: “Me and my friend Erik made the film to try to get other people cycling and make it look cool and fun – because it is! We go cycling because we know that we need to keep active and fit but we use the network as we know it's a safe place to cycle, no cars passing by and we love the beautiful scenery that we pass. It only took us a day to film it, although the editing was longer, but it was good fun.”

The winning film in the under-11s category is an animation, and fittingly, the prize will enable its maker, 10-year-old Aidan Booker from Halesworth, Suffolk, to meet some multiple Oscar-winning pros, having landed himself a trip to the Bristol studios of Aardman Animations, makers of Creature Comforts, Chicken Run and the Wallace and Gromit films.

Aidan's entry, showcasing the variety of activity that takes place on the National Cycle Network, is certainly an engaging animation, but there's a serious message attached to it too, as the youngster, whose family is car-free due to environmental concerns, goes on to provide a quick comparison of the cost of a mile of motorway against a mile of cycle track.

According to Aidan, “When I use the cycle network it’s a haven away from the hustle and bustle of the roads and I wanted to show people this. I have done a few short animations before, and doing the Sustrans film took me about a week of really hard work but it was great to have a good reason to make quite a fun film. I am really looking forward to going to the Aardman studios and hope to pick up some tips!”