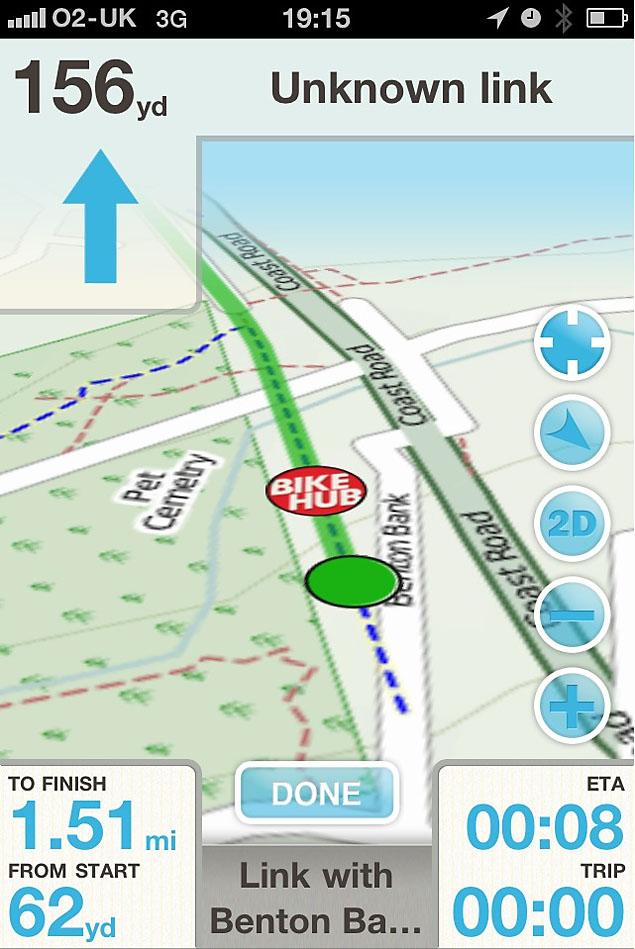 The Bike Hub iPhone app has been very well received in cycling circles and soon there will be a brand new version, that brings even better bike-specific navigation to the masses. Well, the iPhone-wielding masses, anyway. So what's new in version two?

Firstly, Bike Hub 2.0 has a 3D satnav function, like what you'd find on the box in your car, with the mapped world disappearing in perspective as you potter along. It still uses the Cyclestreets bike-specific routing engine, which means that your route can take you on the paths and cut-throughs that drivers can't use.

Turn-by-turn navigation is included in the software, and you can set the phone to vibrate with each instruction, so you can have your phone in your pocket and still know when it's letting you know where to go. There's voice instructions too which the Bike Hub chaps reckon are plenty loud enough from your pocket on quiet streets, though for noisier areas you might need to ride with one earbud in. However, since the app is partly designed to get you out of the traffic it shouldn't be too much of an issue.

The new version of the app uses voice synthesis to keep you abreast of street names, and even path or traffic-free route names where they're available. As before you can opt for quickest, quitest or balanced routes, the latter being a mix of the first two.

Another new addition for this version is the inclusion of 'via' waypoints so you can route your ride where you want. Also, the green route line is now semi-transparent so that you can read street names through it, a small amendment but a useful one.

As well as the satnav functionality there's a bike shop locator function, which gives the location of 2,500 bike shops across the UK and can direct you to a nearby store if you get into trouble. The app is free, having been funded by the UK bike levy, and the new version will be downloadable from the iTunes app store in the next week or so.

"What about an Android version?", I hear some of you cry. Well, the good news is that an Android version is in development, and the first iteration (a journey planney plus the store locator) will be available in December, with the satnav functionality being added for a January release.