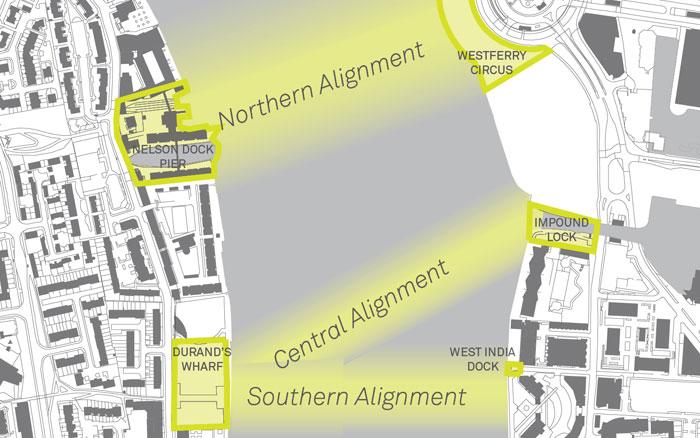 Transport for London (TfL) says it is working on the design of a ferry between Rotherhithe and Canary Wharf. The proposed service replaces earlier plans for a cycling and walking bridge across the Thames linking the two locations. Meanwhile, further details have emerged of a planned temporary cycling and walking bridge over the Thames at Hammersmith.

It is hoped that the “turn up and go” ferry from Rotherhithe to Canary Wharf, which will link new and proposed cycle routes on either side of the river, will lead to more people walking and cycling for journeys between Southwark and Tower Hamlets.

Those include the Thames Path on either side of the river, plus the Rotherhithe cycleway to the south and a route from Hackney to the Isle of Dogs on the north bank of the river.

Consultants are now drawing up plans for locations of piers, design of the vessels and how the service, which would be suitable for people with adapted cycles or cargo bikes, will operate.

It is planned that work will begin on building the new piers and ferries next year, following a public consultation that will take place this summer. 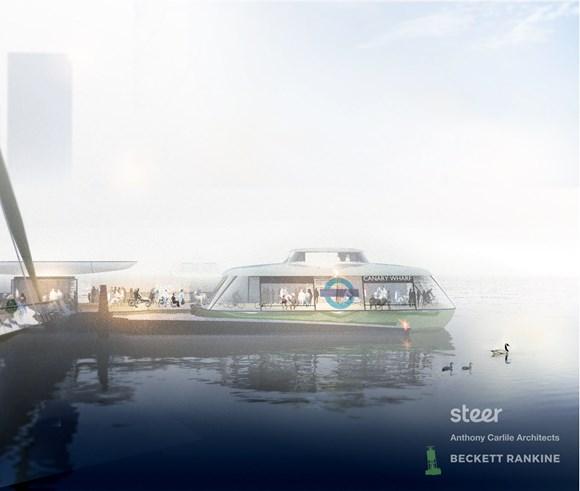 Described as a “turn up and go” service, the ferry is seen as “a more affordable proposal” than the previously planned bridge, shelved in last summer with cost cited as a major factor in that decision.

TfL has appointed consultancy Steer to develop the proposals including whether the ferry could be made free to users through sponsorship and subsidies.

Heidi Alexander, London’s deputy mayor for transport, said: “We are absolutely committed to improving cross-river connectivity for cyclists and pedestrians, particularly in east London where there is a pressing need.

“This new rapid ferry service between Rotherhithe and Canary Wharf would make it even easier for Londoners to get around the capital by bike or on foot and would bring a boost to businesses in the area.

“It’s exciting to see these plans starting to take shape and I look forward to seeing more detailed proposals later in the year.”

Last week, we reported on how TfL is inviting feedback regarding a proposed pedestrian and cycling bridge to be put in place while Hammersmith Bridge, currently closed to motor traffic but open to people on bikes and on foot, undergoes essential repairs.

TfL has now released an artist’s impression of the planned temporary bridge, with Mayor of London Sadiq Khan saying: “Hammersmith Bridge is a vital crossing and we are determined to see it brought back into use as soon as possible. 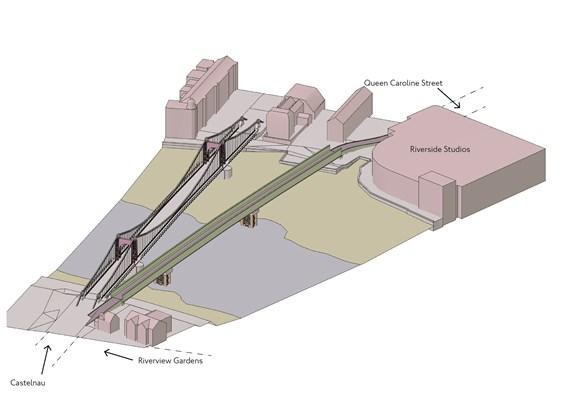 “This temporary crossing – which would be built by TfL – would ensure Londoners can continue to travel across the Thames on foot or by bike, while essential repairs are carried out to restore the original bridge.

“We are keen to hear residents’ views on these proposals and hope work on this temporary bridge will begin this summer, should all the necessary consents be granted.”

Those permissions would be required from the boroughs of Hammersmith & Fulham on the north side of the river, which is Labour-controlled and owns Hammersmith Bridge itself, and Richmond-upon-Thames, where it makes landfall on the opposite bank.

Since the bridge’s closure on safety grounds last year, the issue has become something of a political hot potato between the councils and MPs on either side of the river.

The leader of Hammersmith & Fulham has backed the cycling and walking bridge, but together with TfL, the council rejected proposals for a temporary bridge also open to motorists, which had been called for in a petition from many Richmond-upon-Thames residents and backed by that council.