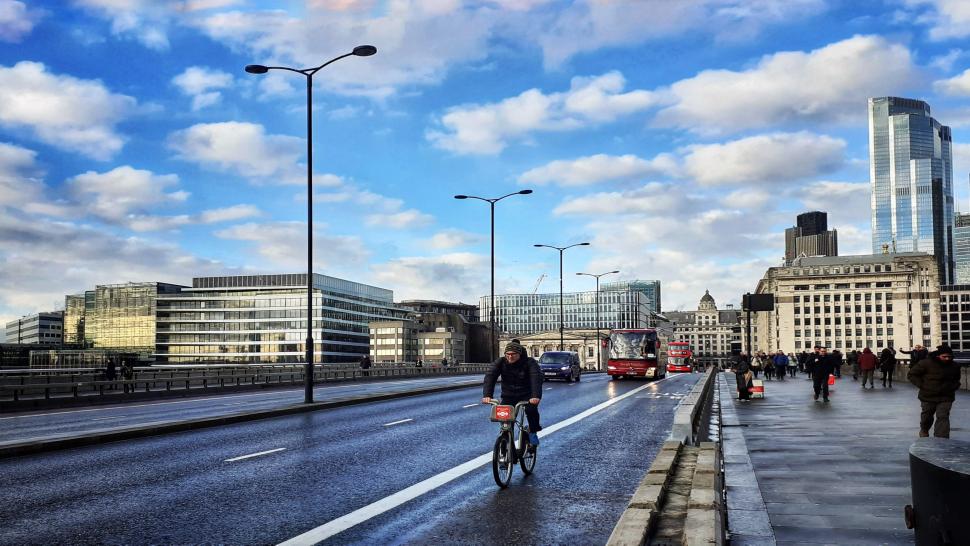 London Bridge to be closed to all traffic but bikes, buses and cabs for essential waterproofing works

London Bridge is to be closed to all traffic other than bikes, buses and licensed taxis for seven months from mid-March while work is undertaken to replace the waterproofing below the road surface of the structure, which in 2022 celebrates the 50th anniversary of its opening.

One of the busiest routes across the Thames and with especially high levels of cyclist and pedestrian traffic, the bridge’s deck is supported by three reinforced, pre-stressed concrete arches and two piers mid-river, meaning that it is essential to prevent the ingress of water which could cause steel within the superstructure to corrode and potentially fail.

Work will also be undertaken to replace 24 bearings, which lie between the bridge piers and deck, as well as other repairs to the concrete deck.

The bridge is owned by the Bridge House Estates, of which the City of London Corporation, which is responsible for its maintenance, is a trustee.

The City of London Corporation said: “During this time, traffic on London Bridge will be restricted to only allow buses, cycles, pedestrians and taxis, with other road users diverted to nearby bridges.

“Walking routes over London Bridge will be much busier than usual, with footways restricted to the east footpath during stage one, and to a combination of the west footpath and part of the east carriageway during stage two.

“People cycling will be able use London Bridge as usual throughout the works, however there will only be one lane open in each direction, shared with buses and licensed taxis. They may find they have a better journey by using a different route such as Southwark Bridge or travelling outside of the busiest times.

“People travelling in the area are advised to plan their journey in advance and to consider travelling at off-peak times or taking alternative routes.

It is worth noting that the carriageway of Tower Bridge, the last river crossing in Central London to the east, is also single-lane only meaning cyclists have to share the same lane as motor vehicles, while Southwark Bridge, to the west has kerbed cycle lanes.

London Cycling Campaign, meanwhile, has urged that a cycle lane be maintained during the works.

London Bridge to close March-October to all but bus, taxi, cycle, walk for repairs. In one lane each way. For cycle safety, a separate semi-segregated cycle track next to each lane is vital, as was done on Tooley Street during works there. More info: https://t.co/qJxuAjgi7P

The City of London Corporation said in a document published on its website in mid-2018 that the waterproofing layer “is overdue for renewal,” and that it “is planned to be renewed every 40 years.”

Given that the bridge was completed in 1972, that means that the works are now eight years overdue.

In the 2018 document, which includes photos of some of the damage already caused to the bridge, the City of London Corporation said that “the biennial bridge inspections have identified problems with water ingress, but replacement of the waterproofing layer has been delayed over the last couple of years to avoid conflict with the road closures for works to London Bridge Station.

“The bridge inspections also identified defects in the bridge bearings, and replacement of the bearings has been recommended.

“This project will prevent further water ingress to the bridge and protect it from structural degradation.”

It added that “If water ingress continues, this allows corrosion of the structure, which is particularly concerning around the pre-stressing cable anchorages.

“In the extreme case, corrosion around these anchorages could result in loosening of one end of the cable and failure of the structure.”