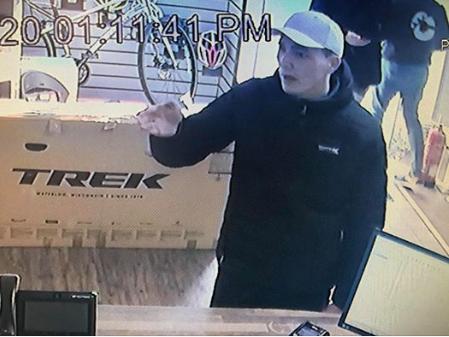 Two bike shops, one in Leicester, the other in Milton Keynes, have been targeted this week by thieves seeking to steal turbo trainers, with one of the shop owners warning other retailers to be vigilant.

On Monday afternoon, two men entered Websters Cycles in Leicester and made off with two turbo trainers, one of which was subsequently retrieved.

On its Facebook page, where it posted CCTV video, the shop said: “We were robbed today at 4pm by some scumbags, they targeted expensive turbo trainers luckily we retrieved one around the corner but there's a hot Elite Direto-Drive out there so if you hear of one going cheap please inform us.

“It was a frightening experience for my staff with very severe threats being made, two spoke with strong Irish accents. Obviously the police have been informed and we do have further CCTV.”

The Facebook post said that the thieves drove off in a dark blue 2009 Ford Focus which had its boot open, the car being driven up Burleigh Avenue and turning left at the Bethel at approximately 4.02pm.

“If you’re local maybe you have dashcam footage,” the post added. “This was planned and I suspect have done it before so others in the trade beware.

Corley Cycles said on Facebook: “Attempted robbery a short while ago at 13:04 this afternoon. Two lads around 6’ came in and while one distracted a member of staff the other tip toed up stair and tried to walk out with a turbo trainer. Thankfully nothing was taken and no one was hurt.”

The retailer, which in August 2018 was targeted in an overnight raid in which thieves made off with 22 bikes worth a total of £70,000, posted two videos of the attempted theft to Facebook.

The first shows the suspect shown in the main picture above heading upstairs, the second shows the second suspect at the back of the store while his accomplice comes back downstairs with a turbo trainer.