All the news from the site and beyond

The quiz show's festive special edition pitched notable alumni from Leeds University and Clare College, Cambridge against each other, and the Leeds team featuring Rev Richard Coles and Tim Allen were given a sporting events question that the vast majority reading this page (we'd hope) would know straight away: "In August 2019, Fiona Kolbinger of Germany beat more than 200 men to win the Transcontinental, a race across Europe by what means of transport?"

Their answer? Skateboarding! Anna Haslock, organiser of the race which was founded by her partner the late Mike Hall, said on the Transcon Facebook page that it was "a rather surreal moment" to have the event mentioned on the show... even if it didn't quite go to plan for the Leeds alumni team.

We'd love to know if any skateboarding experts/maths geniuses could work out how long it would actually take to skateboard 4,000km across some of Europe's toughest terrain, and how uneven your legs would be in size after completing such a feat... meanwhile, you can recap one of the greatest sporting achievements of 2019 by reading our feature on Fiona Kolbinger, and find out how she did it with a breakdown of her equipment list here.

Merry Feelgood Christmas to all potential Cycling Cities out there!
(Video: @BicycleMayor020) pic.twitter.com/2uWAsNrN6W 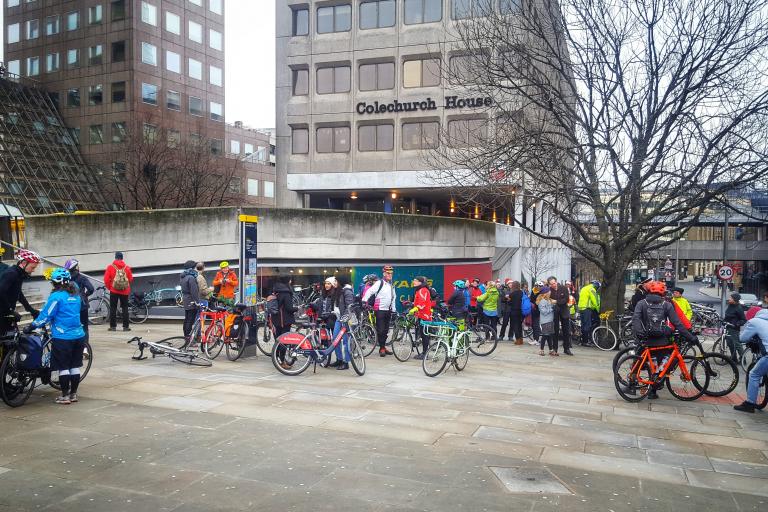 It's London's annual Christmas Day Ride tomorrow - and it's a lot of fun!

If you're in London tomorrow and free of family or other duties, you could do a lot worse than pop along to the annual Christmas Day Ride organised by the Dog & Bell Crew, who are based out of a back street pub in Deptford but who include members of Cycling UK and local London Cycling Campaign branches.

The ride is a lot of fun and starts at Cutty Sark Gardens, Greenwich, at 10am, but if you can't get there in time, don't worry - most join it an hour later at the Southwark Needle at the south end of London Bridge.

Ridden at a family-friendly pace and full of stops to discover hidden features of the city's history (and perhaps even have a festive tipple), it concludes as ever with lunch at around 1.30pm at the Beirut Cafe on Edgware Road.

More details can be found on the Southwark Cyclists website, and you can find a write-up be our news editor Simon - who plans to be there tomorrow - of last year's ride here. Cycling legend Hugh Porter will next month celebrate his 80th birthday - by riding 80 laps of the Wolverhampton track where he trained for his four World Championship individual pursuit victories, still a record number of victories in the event today.

The Hugh's 80 for 80 challenge on Sunday 27 January will see him and friends ride the equivalent of 22 miles to raise money for Compton Care Group, a charity of which Porter is patron and which helps people with incurable diseases.

On his Just Giving page Porter, known to younger generations of cycling fans for his broadcasting, covering events such as the Olympic Games for the BBC among others, says: "Many cyclists choose to ride a distance the same as their milestone birthday but this event will be special and unique.

"At 11am the Mayor of Wolverhampton will start the event and I will cycle 80 laps (approximately 22 miles) with friends. At the same time, there will also be spin bikes by the side of the track where other riders will be matching our efforts on the track.

"As a former World Champion, Aldersley Stadium is close to my heart as it played a major part in my career.

"It is where I raced as a youngster and I also won a British National Team Pursuit Championship as a member of the Wolverhampton Wheelers at this track.

"It is where I prepared for my World Championships and Wolverhampton City Council honoured me by naming a road nearby the Hugh Porter Way."

He added: "I am a Patron of Compton Care and so the best birthday gift you could give would be to make a donation to this extremely worthy cause which supports local people with complex and incurable illnesses to live their best life possible.

"Please support me if you can and if your donation could contain an 8 in it then so much the better – whether it is £8, £28 or £88 it will all make a difference." Italian lid maestros MET have been bolstering the crash protection of their Christmas tree by making tiny 3D-printed versions of the Vinci, Rivale, Manta, and Trenta helmets. MET say: "This winter, our Engineers worked on a new top-secret project: making helmets smaller and more compact than ever. By chance, they were the perfect decorations for the MET Christmas tree!" We're reading that as: "We got bored one day and made some mini helmets and it's Christmas so here's a press release", but even so... MET made them by 3D printing to get a shape to begin with, cleaning and coating them to "add strength to their little bodies", before drying and spray painting in a glossy festive red. Beats those stale decorative Christmas tree chocolates, I suppose...

Getting passed on a climb happens to us all, but surely a little wave or even a nod wouldn't hurt? Pro cyclist Alex Dowsett seems to think that Rapha wearers are particularly bad for not waving. It all started with this Tweet...

Was passed on a climb the other day, (not an uncommon occurrence) by a rider decked head to toe in shiny Rapha, they did not wave, nor say hi or anything, it was game face, seemingly hardly breathing whilst easily cruising past (& likely dying a thousand deaths on the inside)...

Before Mr Dowsett eventually cooled off on the Rapha prejudice and wished us all a Merry Christmas...

To the folk I offended, and it appears there are a number of them.

Fundamentally I get irked by riders that don’t acknowledge other riders on the road when there’s a clear superiority complex. Even in the deepest darkest depth of an interval I’ll wave, there’s no excuse.

Our own Jo Burt, meanwhile, hates all you Altura wearers....

i now hate everyone wearing that brand

And finally, TT specialists Ryan Mullen and Michael Hutchinson both claim that Dowsett did the unthinkable and didn't wave to them while racing TTs...

He caught me at the Glasgow Commonwealths. Did he offer me a licquorice allsort? He did not.

So based off baseless anecdotal evidence, what do you think is the most miserable cycling apparel brand that is the least likely to give you a wave on your festive ride tomorrow? Do let us know in the comments, for some reason or another...

The #Festive500 starts today. Follow us on Instagram for all the latest updates from each day of the challenge. What are you waiting for? https://t.co/VAPPLPj7rn pic.twitter.com/MQraaX1mgt

Wait, what do you mean that's not the aim? Good luck if you're going for miles!

Oh Peloton, you're hated for suing a YouTuber, your sexist ads, and the terrible quality and value of your spin bike.

Our architect suggested a Peloton nook for our pied-à-terre. They do not belong in nooks. They belong where an observatory would be, if you didn’t own a Peloton.

It's the news that all cyclocross fans have been waiting for. Wout Van Aert is back!

The three-time World Champion be lining up in Loenhout this week at the Azencross, a traditional post-Christmas race.

It's a great indication of which riders had a 'fun' Christmas. Here are the highlights from 2017.

A fabulously random video popped up on our YouTube channel this morning.

Turns out that Jumbo-Visma is also a speed-skating team. We reckon Wiggo would be decent on the ice with his height, and errr...beard?

After being hit by a car in America, the around-the-world rider has been recovering in a hospital in Texas.

He speaks of being "lucky to be alive" after being hit at 70mph and "thrown 50ft through the air". The crash resulted in 10 broken ribs along with a long list of other injuries, but that hasn't dented his mental strength which he describes as being just as strong as ever.

This family turned up in my room tonight to pay me a visit.

I was very confused as I’d just had surgery

They drove here from Austin when they heard what happened.

A family that Quigley met in Nepal back in 2018 came to visit him and the Scot is still aiming to complete his ride!