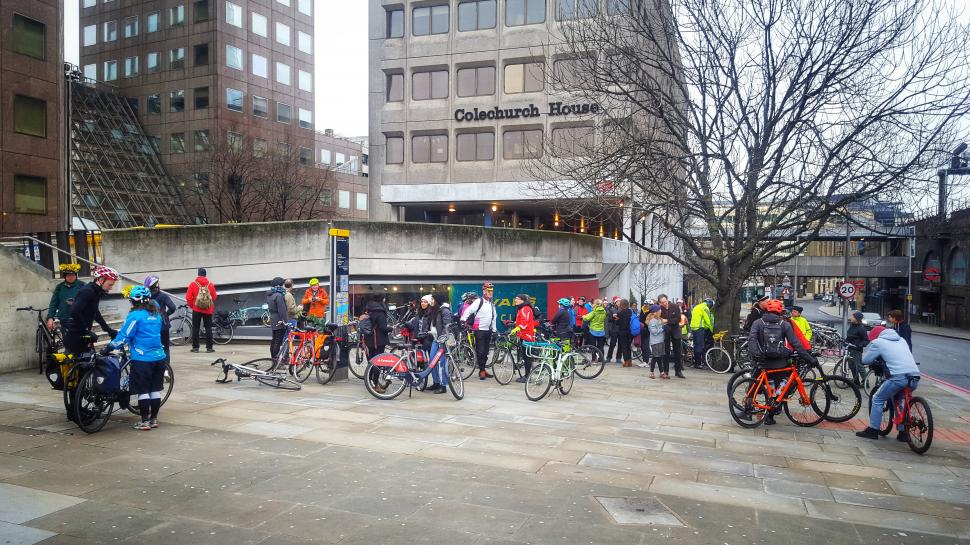 Christmas, of course, is a time for traditions – and one that has established itself for many of the capital’s cyclists over the best part of 20 years is the annual Christmas Day Ride that meets at London Bridge at 11am.

It’s a great day to ride a bike through the city. Buses, lorries and delivery vans have miraculously vanished from the streets, and little traffic remains – mainly black taxis and minicabs, whose drivers seem to adhere to the season of goodwill to all men and women, including cyclists.

So with my girlfriend visiting family in Milan and me alone looking after her flat in West London, for the third time in five years I found myself pedalling across town to see what this year’s ride held in store.

Founded in 2001 by the late Barry Mason – co-ordinator of Southwark Cyclists, founder of Greenwich Cyclists and organiser of the Dunwich Dynamo – the ride officially starts from the ‘Needle’ at the junction of London Bridge and Tooley Street.

In the past, it’s been organised by the London Cycling Campaign or Cycling UK, but this year the Dog & Bell Crew social cycling group – based out of the Deptford back street pub of the same name – have taken it on.

The route varies from year to year – this time round, it’s a longer route than has typically been the case in recent years,  apparently harking back to the early days of the ride.

There are feeder rides – one from London Fields in Hackney, the other from the Cutty Sark – and since once again the weather is reasonably decent for the time of year, I decide (partly as a former Greenwich resident) to head to the latter, even though finding a café surprisingly open en route means I have no chance of making the 10am start time.

As it is, I get there so late that I start worrying about whether I’ll catch the Greenwich contingent on their journey to London Bridge along National Cycle Route 4, which largely follows the Thames Path.

So at Rotherhithe it’s back onto Jamaica Road then Tooley Street – roads I would avoid if in my commuting days, but delightfully quiet on Christmas morning – to arrive at London Bridge bang on 11am, 30 kilometres already in my legs, according to Strava.

At this point I should perhaps mention that I’m riding my Elephant Bike – an heavy old ex-Royal Mail Pashley that is perfect for getting round the city with my dog in the basket, but which I’ve never done more than 50 kilometres on in a single ride before. A record that will be broken today.

By the time the Greenwich contingent arrive – it turns out I would have caught them had I taken the scenic route – there are about 60 of us, many fortified (sorry) by a glass of sherry thoughtfully provided by one of the Dog & Bell Crew who will be hanging at the back of the ride, ensuring no-one gets left behind.

That quick snifter, and the fact we are mounted, are the only things we have in common with the Boxing Day hunts that will take place in more rural areas 24 hours later. Had we spotted any of London’s teeming population of urban foxes during the ride, they’d have been left well alone.

We’re a rag-tag bunch. There are people of all ages on road bikes, mountain bikes, folding bikes, Santander Cycles hire bikes and a guy on a very striking Mason Bokeh gravel bike, and the group is split equally between men and women.

We are far from the only cyclists around town today, they are everywhere – including at one point a toddler whose dad is encouraging him to take his first tentative steps on a balance bike.

The ride, as on the previous two occasions I’ve taken part, is led by Bermondsey Bill and, as each year we start off by taking in some places associated with Charles Dickens’ life, with Bill acting as guide on our stops.

Now, I reckon I could beat most people on a quiz about London, I grew up here and love exploring its nooks and crannies and have shelves crammed full of books on the city, but despite having lived near where today’s ride starts, I’m introduced to new places.

There’s the still surviving wall of Marshalsea Prison, where Dickens’ father was imprisoned as debtor and which would provide the inspiration – and much of the setting – for Little Dorrit.

There’s the side street near Borough Market with railings festooned with ribbons and tributes to the ‘Geese of Winchester’ – the prostitutes in medieval times who plied their trade in Southwark, owned at the time by the Bishop of Winchester, and who were buried in paupers’ graves right by where we are standing.

There’s the sculpture of a golden dog licking out a cooking pot – one I’ve never noticed before – that is inspired by one of Dickens’ letters and is opposite Transport for London’s headquarters in a building named the Palestra (in response to Bill’s question to us, though, I did know that its name comes from the Latin for gymnasium, and that the pub opposite has a boxing gym on the first floor).

There’s another stop, just under a railway bridge, at what was the original Doulton pottery works near Waterloo station – another London find for me – before we stretch our legs and head towards Battersea.

I’ve passed Battersea Power Station countless times over the years, starting with twice a day on the train to and from Victoria for five years on my school commute, but today’s ride takes us into the site itself – one of the biggest (power) regeneration sites in Europe.

We’re promised a tour of the control room – which turns out to be via a virtual reality app, but fun nonetheless – then it’s on, via a quick circuit of the US Embassy (wishing a reciprocated ‘merry Christmas’ to the armed Met coppers outside) to Wandsworth and several cyclist-unfriendly new riverside developments – to the Duke’s Head in Putney for a lunchtime drink.

Reader. I sacked the ride off on the King’s Road (it’s stressed at the start that it is permissible do dip in and out, by the way). By that point, with 60-odd kilometres done, my phone dead, and me desperately in need of a pee (that stop in Putney, oops) it was time.

And by doing that, I missed what is one of the highlights of the ride, the Lebanese meal at the Beirut Café on London’s cosmopolitan Edgware Road.

I suspect that many of us on the ride were people at a loose end on Christmas day with no commitments to visit family, or do kitchen duties, so we could just go out for a fun bike ride, but there’s one other thing I should mention.

It was a huge amount of fun. People who love riding bikes doing just that on the best day of the year to cycle round our country’s capital.

If you find yourself in London next Christmas day and have a few hours spare, come join us; I promise you won’t regret it.