Coming soon to a cycle helmet near you? Boeing and General Motors-owned firm says its microlattice pads makes helmets better at absorbing shocks

A company co-owned by Boeing and General Motors which develops microlattice materials has claimed that new shock-absorbing pads it has produced significantly outperform those currently used in products such as cycling helmets.

Malibu, California-based HRL Laboratories says that tests suggest that the pads, made from an architected elastomeric material, were more efficient in absorbing energy by up to 27 per cent compared to “current best-performing expanded polystyrene (EPS) foam when sustaining a single impact.”

Publishing its findings in the current edition of the journal Matter, it says that when subjected to repeated impacts, the pads provided “up to 48 per cent improved absorption efficiency over the state-of-the-art vinyl nitrile foam.”

The material is also said to provide a cooler experience for helmet-wearers due to its open-celled architected structure, which the company says resembles the structure of the Eiffel Tower.

Besides potential for use in football, military and bicycle helmets, the company says that the material could also have applications in areas such as packaging and vehicle interiors.

HRL researcher and co-author Eric Clough said: “The best competing architected pads to date have maximum energy absorption efficiencies up to 44 per cent for a single impact.

“Also, the competitor lattice-based pads are irreversibly smashed after sustaining a single impact,” he added, “whereas, our elastomeric microlattice pads continue to efficiently absorb the shock of multiple repeated impacts.”

Explaining how the technology works, Clough said: “Microlattice is composed of solid polymer struts and air. Unlike foam it has an ordered architecture that enables improved performance in airflow, energy absorption, stiffness, and strength.

“Under high impact, microlattice stiffens to absorb energy and significantly reduces acceleration and force transmitted to the wearer.”

The pads are produced using a process called light casting, in which ultraviolet light is passed through a template onto liquid resin made according to a special formula.

“With light casting we can make a set of pads for a helmet in under a couple minutes,” Clough explained. “Methods such as stereolithography 3D printing would take a much longer.”

The company has licensed its microlattice technology portfolio to VICIS, a spinout business of the University of Washington and whose $950 Zero1 helmet is widely used in NFL and college football, a sport in which there has been a strong focus recently on the effects of head injuries on athletes and how to reduce them.

In 2011, HRL Laboratories announced a metallic microlattice developed jointly with researchers at University of California, Irvine and Caltech. 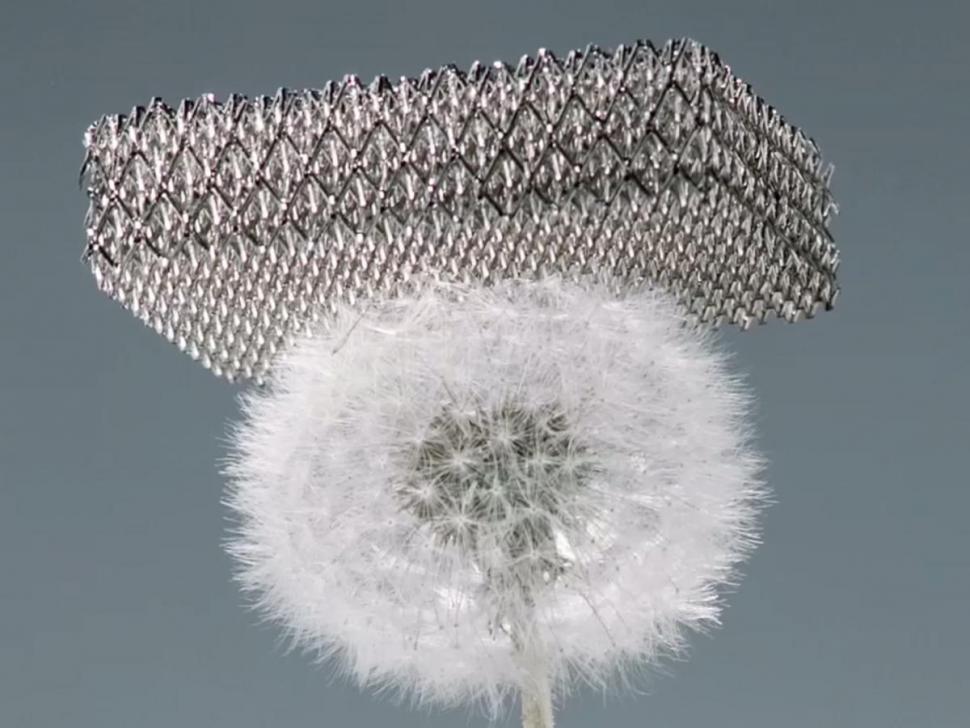 Composed 99.99 per cent of air, which makes it 100 times lighter than Styrofoam, it was recognised in 2016 as the world’s lightest metal by Guinness World Records.

When it was unveiled, a publicity shot emphasised its lightness by showing it resting on top of a dandelion in seed – but its strength makes it suitable for applications in the aerospace and automotive sectors, amongst others.