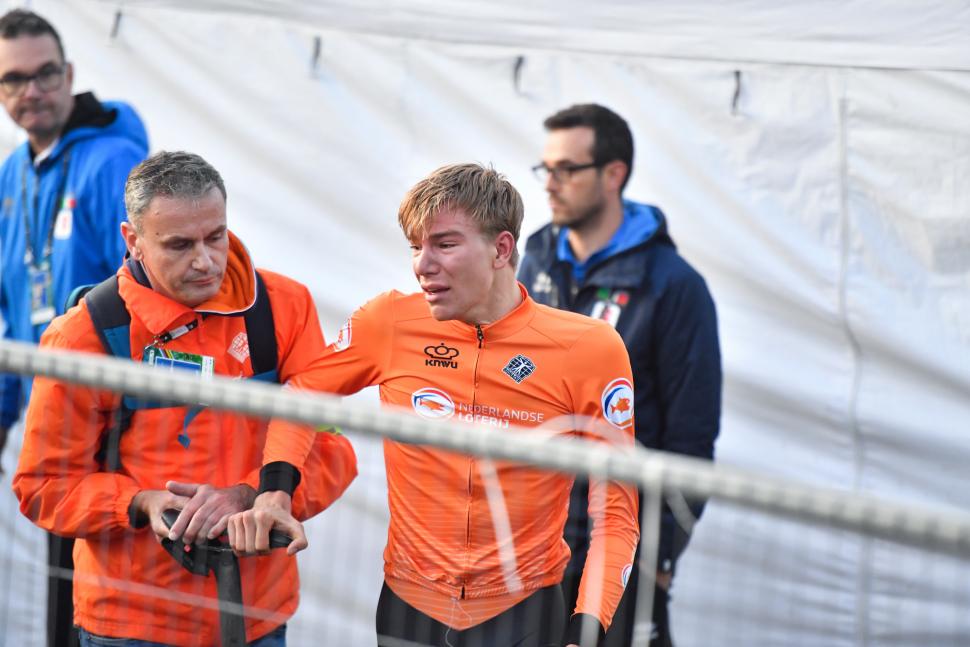 The agent of Nils Eekhoff, the Dutch rider stripped of the victory in the men’s under-23 road race at the UCI Road Cycling World Championships yesterday, has threatened to take legal action in an attempt to have the race jury’s decision overturned.

Eekhoff, aged 21 and a member of Team Sunweb’s development team, was adjudged to have illegally drafted a car as he attempted to rejoin the peloton after crashing with 125 kilometres of the race from Doncaster to Harrogate still to ride.

Full video of the #eekhoffgate episode
UCI had a 124 kilometers to take action.@nilseekhoff is the U23 World Champion to me pic.twitter.com/NihEw5cqm4

He was one of a trio of riders who bridged across to the front quartet as the race approached the final kilometre and was strongest in the sprint. It quickly became apparent, however, that the race jury was reviewing the result and after almost half an hour of deliberation, the win was awarded to Italy’s Samuele Battistella.

Yesterday evening, his management agency SEG told cyclingnews.com: "Together with Team Sunweb we'll research the situation and the legal options we've to defend Nils and make sure he gets the rainbow jersey that he deserves. Our legal department is currently studying the case."

Eekhoff, who was visibly distraught after learning of the race jury’s decision, said: "I crashed, got a dislocated shoulder, put it back, but also had a mechanical so it took longer.

"Then I got back on, the car brought me back to the caravan, and at that moment I rode myself towards the peloton.

"At the moment I crashed, it was still 125 kilometres to go. The race was still to be ridden. In my opinion, I fought for it. It should be possible after a crash that you can be brought back to the caravan. I had no idea I was taking a risk."

In a statement, the UCI said:

The Union Cycliste Internationale (UCI) wishes to provide further information on the disqualification yesterday of Dutch rider Nils Eekhoff at the Men U23 road race during the 2019 UCI Road World Championships in Yorkshire, Great Britain.

The rider was disqualified for sheltering behind a vehicle (4.7 of article 2.12.007) for over 2 minutes.

The maximum sanction provided by the article was considered appropriate due to the time spent sheltering.

The decision was taken by the commissaires’ panel after the race based on images from a moto camera available to the UCI video commissaire. Race officials have reviewed the images (available here), followed due process by hearing the rider and team before making the decision.

Also, the race communique lists two other riders disqualified under the same article and according to the same process.

As the world governing body of cycling the UCI is deeply committed to ensure the integrity of cycling and the fairness on the field of play.