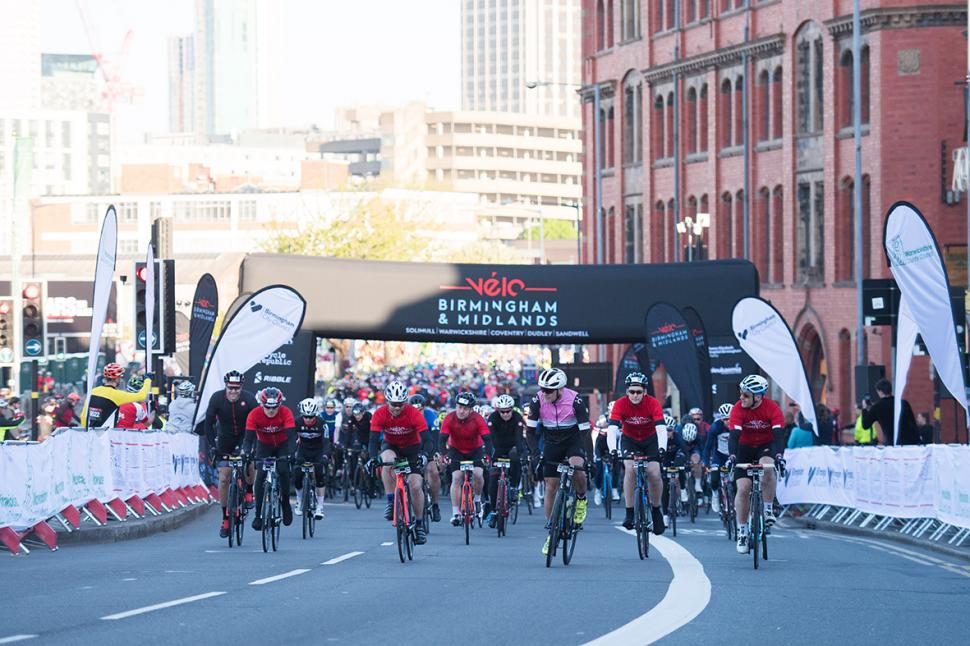 Organisers of the Vélo Birmingham & Midlands closed road sportive have brought forward the date of next year’s event because they hope to attract a “high profile professional road race” as part of the programme – and given the timing, our hunch is that the race in question is the national road championships.

The sportive was originally due to have been held on Sunday 28 June 2020 but has now been brought forward by a week to Sunday 21 June 2020.

In a statement released today, organisers said: “As part of the organisers’ ambition to build the event into one of Europe’s biggest and most high profile cycling events, they are deep in discussions to host a high profile professional road race as part of next year’s event.”

They added: “Whilst there is no guarantee organisers will be successful in their bid to host a professional road race in 2020, they have taken the early decision to move the date in order to align with the UCI (Union Cycliste Internationale) calendar and give them the best possible opportunity to deliver on their vision.”

The new date means that next year’s Vélo Birmingham & Midlands will take place the weekend before the Tour de France starts, which is the slot in the calendar when national championships take place throughout Europe.

That, plus the allusion to a bidding process, would seem to suggest that the event in question is the HSBC UK British Cycling Road National Championships.

We have asked British Cycling for confirmation of the date the event is scheduled to be held next year, as well as whether they have received any such bid.

In a statement sent to road.cc a spokeman for the governing body said: "We will be announcing the dates and the host of next year’s HSBC UK National Road Championships later this year. As is the case for all of our events, we will not be making any further comment until that time."

Besides the men’s and women’s road race, which assuming the event takes place the weekend prior to the Tour de France Grand Depart would be on Sunday 21 June, typically the time trials would take place on the preceding Thursday 18 June.

If our hunch is correct and the revised date is due to a bid for the road national championships, that would mean further road closures, an issue that has seen the sportive originally launched as Vélo Birmingham in 2017 attract local opposition in the past.

The first edition that year had its route changed due to opposition in Worcestershire and a planned second edition of the event in 2018 was cancelled.

It returned this year under the new name Vélo Birmingham & Midlands, although late changes to the route were described as “unforgiveable” by one local councillor.

As we reported last month, a petition was launched calling for the 2020 event to be cancelled and to date has attracted just over 1,000 signatures.

Speaking of the decision to bring next year’s event forward Richard Relton, CEO of the Vélo Series, said: “As event organisers, it has always been our ambition to build Vélo Birmingham & Midlands into a much broader ‘festival of cycling’ that engages enthusiasts of all ages and experience levels.

“As part of this we have a strong desire to host a high profile professional road race during the Vélo Birmingham & Midlands weekend.

“This is a fantastic opportunity for Vélo Birmingham & Midlands to fulfil its true potential as one of Europe’s biggest and most inclusive cycling events as we build towards the 2022 Commonwealth Games,” he added.

Pre-registration for Vélo Birmingham & Midlands 2020 are now open at www.velobirmingham.com, with entries for the 100-mile route opening on Thursday 3 October.

1
Fears new cycleway will lead to drunkenness, drug taking and 'naked selfies in the woods' (no, really)
2
eBay seller refuses to accept bike auction offer – says "would be unhappy if I sold to Scouser"
3
Three Bora-Hansgrohe riders in hospital after driver crashes into training ride
4
Near Miss of the Day 520: Cyclist hit by driver's wing mirror coming under narrow bridge
5
Cycle to Work scheme bikes (temporarily) don't have to be used for commuting
6
Cyclist crushed after farm worker failed to secure straw bale to trailer, court told
7
Police investigating cyclist Tony Parsons' disappearance confirm his body has been found
8
Near Miss of the Day 521: Close pass ... by a police van (plus how it all went a bit Kafkaesque afterwards)