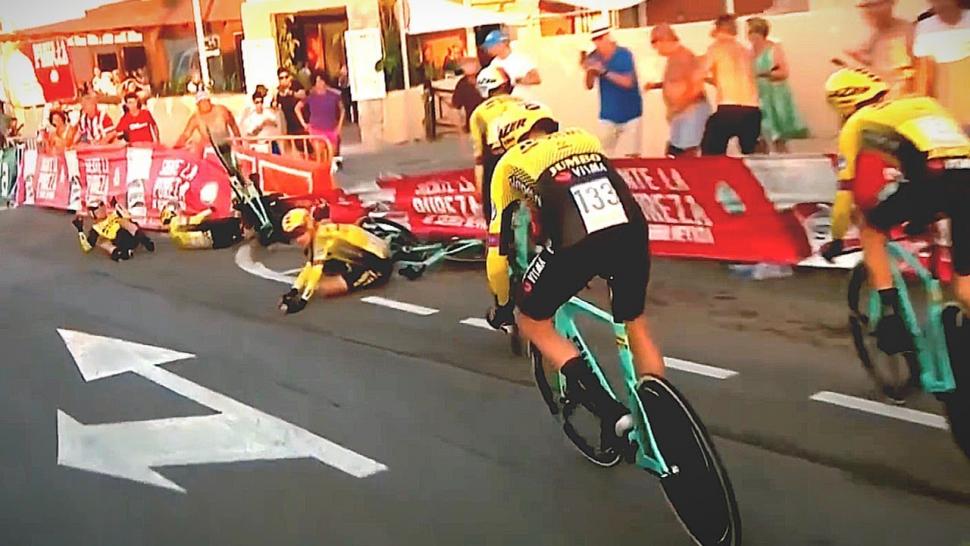 The crash which dented Jumbo-Visma’s hopes of a strong performance in yesterday’s opening team time trial at the Vuelta a Espana was due to an inflatable paddling pool a child was playing in half a kilometre away bursting, according to the team’s sports director.

Primoz Roglic and Steven Kruijswik, the Dutch team’s co-leaders for the race, both lost 40 seconds as a result of the crash, which happened when several riders skidded on surface water just after a tight bend.

Not our day today at the opening TTT of @lavuelta . First four of us went down due to a large wet spot on a roundabout.

Riders from UAE Team Emirates also came down on the same corner as a result of the wet road surface.

Not only Jumbo Visma but UAE Team Emirates crashed in the same place minutes before during stage 1 of La Vuelta. They were 17th and 21st in the stage classification #LV2019 pic.twitter.com/RntXFMuzYe

Yesterday evening Jumbo-Visma sports director Addy Engels said it was a “far from ideal” way to begin a Grand Tour.

“We have lost precious time,” he said. “We will have to assess the damage and see how we will deal with it in the coming days and weeks. We certainly had not taken this scenario into account.

“We were a favourite and it would have been close if we hadn't crashed. Now we are 40 seconds behind. Whether the injuries aren't too bad or not, there is always damage.”

Engels said he had sought an explanation from organisers Unipublic, adding that the water had not been there when the team carried out its reconnaissance ride earlier in the day.

“They went to the house where the water came from,” he said. “That is 500 metres from the course, on a steep slope that goes straight onto the roundabout.

“There was a child playing in an inflatable plastic swimming pool that broke.

“As a result, according to the organisation, all of that water flooded down onto the road all of a sudden."

Astana put in the fastest time of the day, with Miguel Angel Lopez taking the race lead.

Bad start for us. Keep your heads up, guys!pic.twitter.com/bDGvFlqxVJ