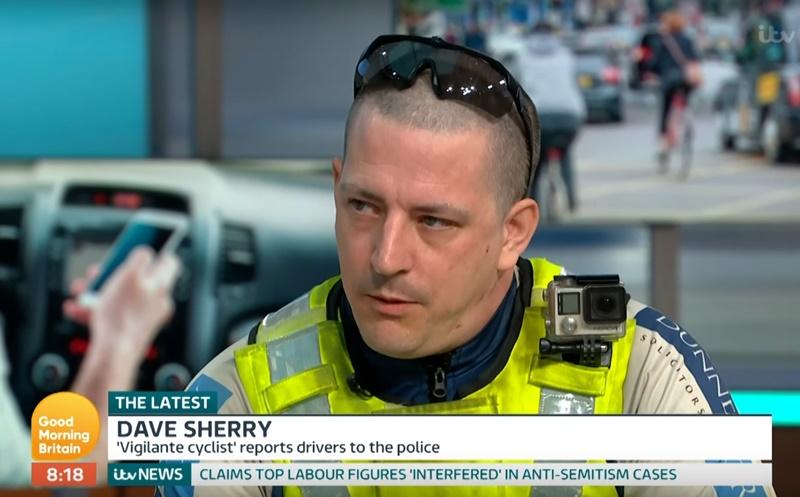 Dave Sherry has a certain enthusiasm for capturing helmet cam footage of law-breaking motorists. The cyclist – who recently featured in that godawful Channel 5 documentary ‘Cyclists: Scourge Of The Streets?’ – says he reports around 70 motorists per week.

Sherry works as a bus driver in East London, but when a motorist drove into the back of his bike while he was out riding with his son on the back, he invested in a helmet camera.

We first heard about him back in 2014, when he claimed his footage had resulted in around 60 motorists being convicted of an offence or receiving a police caution.

Since then, he’s appeared on local BBC news, been a guest on This Morning, teamed up with Mr Loophole and presumably reported a few thousand motorists for one offence or another.

This week, he was on Good Morning Britain. You can watch his fellow guest Penny Malory, a former British Rally Championship driver, complaining that cyclists are unidentifiable and unaccountable here if you’ve somehow not yet hit your tolerance for this sort of television.

To be fair to Malory, she does make a point of explaining how ‘road tax’ is an emissions tax and she does emphasise that cyclists are vulnerable road users. However, it is, for the most part, a fairly typical Good Morning Britain cycling segment. (Remember when they started on cycle helmets a few weeks ago?)

Malory considers Sherry’s road safety approach “deeply unhelpful” and recommends that he instead spend his time trying to educate people.

Sherry defends himself by saying that the police support his effforts.

“Next week I’m going down to Sidcup to meet the top person of the Met police – the prosecutions department – and they are loving what is happening: proactive citizens – road users, pedestrians – shopping car drivers for breaking the law.”