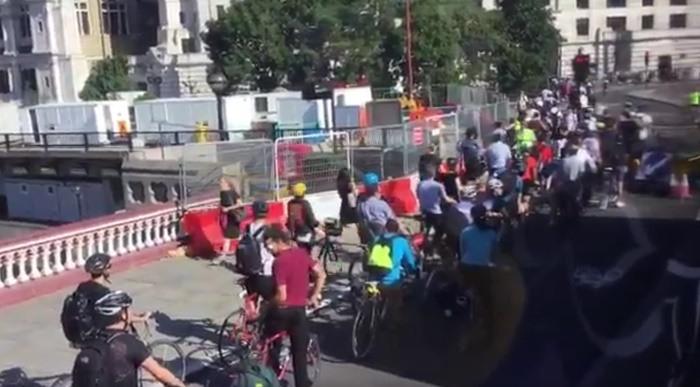 Safe infrastructure leads to record rise in cycling in London

The introduction of protected cycling infrastructure in London helped fuel a record rise last year in the total distance being cycled in London, according to new figures released by City Hall.

On aggregate, the capital’s cyclists rode a total of 4 million kilometres each day during 2018, a 5 per cent increase on the previous year, the strongest growth since Transport for London (TfL) began recording the data in 2015, reports The Guardian.

At 8 per cent, the increase was higher in Inner than Outer London, believed to be attributable to the protected cycleways such as the one from Tower Hill to Lancaster Gate and Elephant and Castle to King’s Cross.

The figures have been released at a time when Mayor of London Sadiq Khan and TfL have had their plans for another protected route through Holland Park Avenue and Notting Hill Gate blocked by the Royal Borough of Kensington and Chelsea.

Will Norman, London’s cycling and walking commissioner, said: “The mayor is determined to enable more cycling all across the capital, and I’m really pleased last year saw the biggest increase in the amount of cycling in London since records began.

“It is clear that where we have invested in new high-quality routes, people feel safer and more confident cycling on London’s streets.

“And it is yet more evidence for boroughs across London that investing in walking and cycling infrastructure works – getting more people healthy and active as part of their everyday routine, and making our streets cleaner, greener and safer.”

However, with the figures continuing to show a big gender and demographic imbalance – just 27 per cent of London cyclists are female, and white, middle class males on above-average incomes still dominate – cycling campaigners have said that more work is needed to encourage a greater diversity of people to take to two wheels.

“Any growth in cycling is a good thing, but we’re clearly a long way from when women, children and the elderly feel comfortable and safe enough to make those shorter local journeys – whether those are to the shops, school, education – all of which are needed not just to increase the diversity of people who are cycling but also the amount of people cycling.”

London Cycling Campaign’s Fran Graham commented: “Time and time again, evidence shows that if you create the conditions that mean people feel safe cycling, they will.”

But, referencing a slogan used by Khan in his successful 2016 electoral campaign, she said that “the mayor has a way to go before London is known as a ‘byword for cycling’ – it’s why it is so important that he hits his target to triple protected cycle track by the end of his term.

“Borough councils also have a large part to play – the recent actions of Kensington and Chelsea to oppose walking and cycling improvements are holding London back, stopping it from becoming a world-class cycling city,” she added.

Elsewhere in The Guardian today, journalist and cyclist Peter Walker examines Ten Common Myths About Bike Lanes – And Why They’re Wrong. It’s well worth a read.