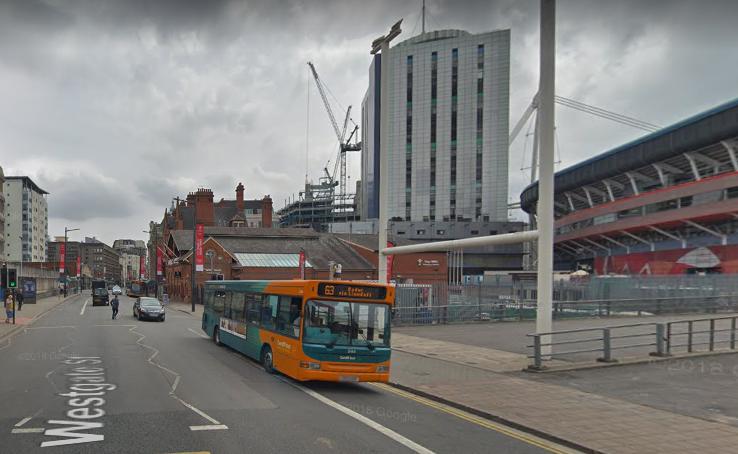 Joseph Nicholson has no recollection of incident, which was caught on CCTV
by Simon_MacMichael

A CCTV camera captured the moment a concussed cyclist who had just crashed in the rain staggered head-first into a moving bus in Cardiff.

Just Eat delivery rider Joseph Nicholson, aged 24, says he has  no recollection of the incident, which happened on the Welsh capital’s Westgate Street close to the Principality Stadium.

He said he initially thought he had injured his thumb but was unaware of his head injury, and turned his bike upside down to reseat the chain but could not remember what happened next.

It was only when he saw the CCTV footage that he learnt he had staggered into the road and into the path of a bus.

"I still don't think I've processed how lucky I am, looking at [the video] there are so many variables,” he told Wales Online, which has a video of the incident.

"It caught me on my neck – that could've been head on, face on, whatever.

"I was heading to St David's to pick up an order and the bike gave way on the metal ground cover –  it was raining – so it just slipped.

"I fell, and I hit my head without realising. I got back up and all I can remember is complaining that I'd hurt my thumb.

"I just didn't realise I'd hit my head."

Mr Nicholson, who lives in Newport, spent several hours in hospital and said that immediately before stumbling into the road he experienced a sensation similar to when "you get up too quickly off the sofa.

"That's the last memory I have until after being hit by the bus. I've been knocked out on my feet, my body's taken over and I've stumbled into the road and been hit by the bus.

"I’d like to thank the bus driver, I have little to no memory of the time before being in the ambulance but I recall him consoling me and being very kind.

"And of course all of the public service staff at the scene and at the hospital. I was seen to immediately and treated very well at the hospital and am incredibly grateful."

He added that his close escape had made him rethink riding without a helmet.

"I've gotten away with one, it could've been fatal,” he explained. "I would say to riders 'wear a helmet'."