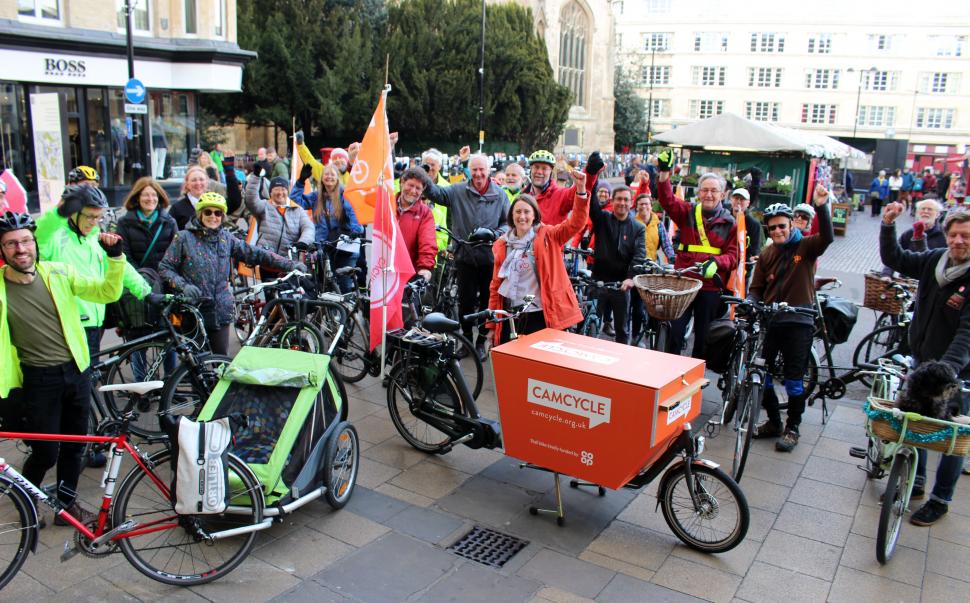 Former shadow transport minister Daniel Zeichner, the Labour MP for Cambridge, joined campaigners on a bike ride in the city on Saturday morning as they called for more Space for Cycling in the city, including safer infrastructure for bike riders.

The ride, now held annually, saw members of local cycling campaign group Camcycle – with more than 1,300 members the largest in the country outside London – join forces with campaigners from organisations including Transition Cambridge and Extinction Rebellion.

The route of the ride took the participants to places in the city where Camcycle believe safer infrastructure is most desperately needed, such as Station Square and Mill Road.

The first, only completed two years ago, is dominated by a taxi rank which means many cyclists are forced onto the pavement as they head through it, while the second is home to choked traffic at peak times during the day and motorists at night sometimes driving at speeds well above the 20mph speed limit.

Along the way, the cyclists – some sporting flags on their bikes calling for Space for Cycling – received support from passers-by, including many locals travelling by bike who make Cambridge by far the leading city for cycling in the UK by modal share.

One participant, Anna Langley, who lives locally, said: “I’m on this ride because I believe that cycling is good for Cambridge, it’s good for our environment and good for the quality of life in our city.

“It’s really important we do this because we’ve got a climate catastrophe 12 years away.

“If we don’t do something about our emissions, we’re In real trouble and cycling is a really good way to deal with that. I think cycling is the transport of the future.”

Zeichner, who addressed the riders before they set off from the city’s Guildhall, defeated the sitting Liberal Democrat MP Dr Julian Huppert, a former All Party Parliamentary Group co-chair, to win Cambridge for Labour in 2015.

For the following two years he served as shadow minister for transport, with specific responsibilities for topics including including cycling.

He said: “I was in Walthamstow last week which is one of the boroughs in London which has adopted the so-called ‘Mini Holland’ approach.

“I was absolutely knocked out by the success of it, by the change it’s made not just for cyclists but in terms of strengthening the community, allowing our streets to be places where children are playing again, the environmental benefits, the health benefits.

“We know it makes sense, but to get more people cycling we also know that we need to make it safer and for people to feel safe when they’re cycling which is why Space for Cycling is such an important campaign.”

At the head of the ride on Camcycle’s distinctive electric cargo bike, painted in the group’s signature orange, was its executive director Roxanne De Beaux, who said afterwards: “We’ve had a great ride today with lots of support from passers-by.

“Clearly the community wants to see more space for cycling and it’s vital that our campaigning is supported by action from councillors and those standing as candidates in the local elections.

“It’s only by investing in safe cycling infrastructure that we will encourage more people to take to their bikes in the UK’s cycling capital.”

The ride was timed this year to coincide with the release of Camcycle’s questions for candidates in next month’s local elections to obtain their views on issues including fighting cycle theft, howto encourage more people to ride, and improving the planning system to ensure safer streets and better facilities.