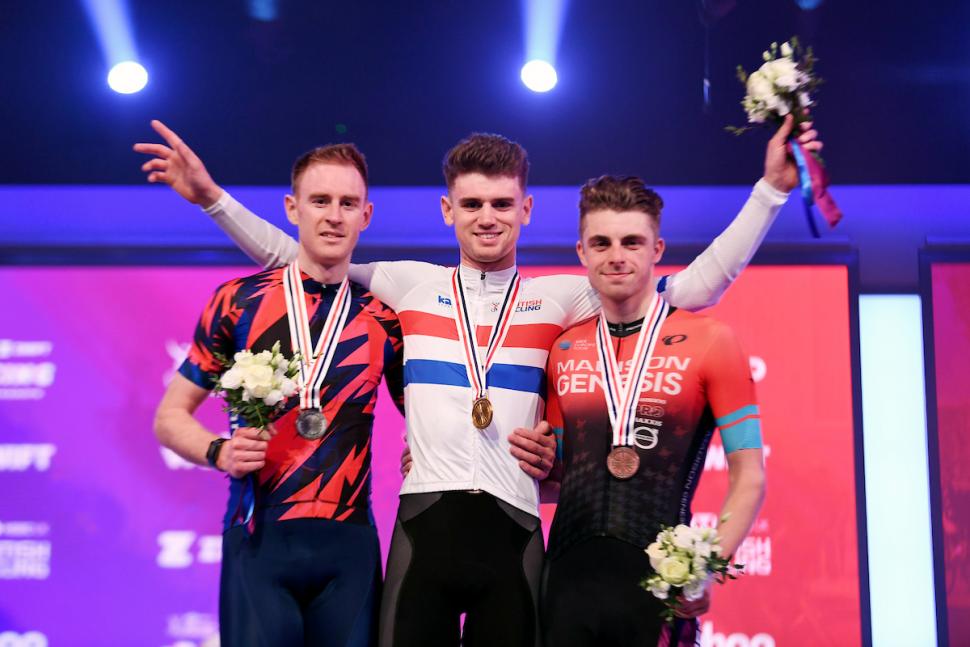 Where do you stand on the debate? Let us know in the comments
by Simon_MacMichael

A tweet from rising star Tom Pidcock has ignited a fierce online debate about whether or not eRacing – also known as virtual cycling – is a proper sport, and whether a national champion’s jersey should be awarded for it.

Posting to Twitter on Friday – the day after the inaugural British Cycling Zwift eRacing Championships at the BT Sport studios in London – the 19-year-old wrote: “Do you know what’s funny? eRacing national champs.”

The Team Wiggins rider has a wardrobe full of champions’ jerseys – national, European and world – won at junior and under-23 level and in 2017 became British senior criterium champion, beating a field including riders more than twice his age.

‏The respective winners last Thursday – Rosamund Bradbury and Cameron Jeffers – were both presented with the iconic red, white and blue national jersey, and their respective avatars will have the right to wear it on Zwift over the coming 12 months.

It’s pretty common for posts on Twitter to polarise opinion, and certainly some people replying to Pidcock’s tweet were categorical that national champion’s jerseys need to be earned on the road, not indoors.

Others, however, said that getting more people cycling, and generating more interest in the sport, was more important, while ex-pro Matt Stephens – a former national champion on the road, and who was commentating for BT Sport last Thursday, also chipped in.

Here’s a selection of the responses. You can find the full thread here – and once you’ve read it, let us know in the comments where you stand on the issue.

It’s just another new strand of our wonderful sport Tom. Not a replacement. An addition. Another access point. That’s fun. And it’s gaining momentum. You should give it a whirl. You’d probably be ok at it.

That’s my mate on the left.. he is over 30, father of 2 kids and is self employed..so no not funny, quite impressive really pic.twitter.com/I1lcBU2HNM

Totally agree, it was being done in another form, 'roller racing', 50 plus years ago, BC should be concentrating on boosting the dwindling road racing scene to produce more great u23 riders like yourself, not touting a training aid as some kind of cycle sport.

Against the general trend of negativity Tom, I'm with you! I've trained indoors for years, I live in the UK, but a national champs? Another access point to the sport? Pin a number on in cross, MTB, TTs, BMX, RR, anything, experience a real race, where skills is also involved.

Stand by your principles Tom and resign from @OfficialWIGGINS immediately. You really wouldn’t want to be associated with someone who competes at static rowing. Whatever next, competitive static cycling?

Racing on E! That's taking doping to a whole new level.
How would one sign up for this? Asking for a friend

It’s just like any other video game championships. And if people are having fun, what’s the harm? We can’t all be pro cyclists, ya know.