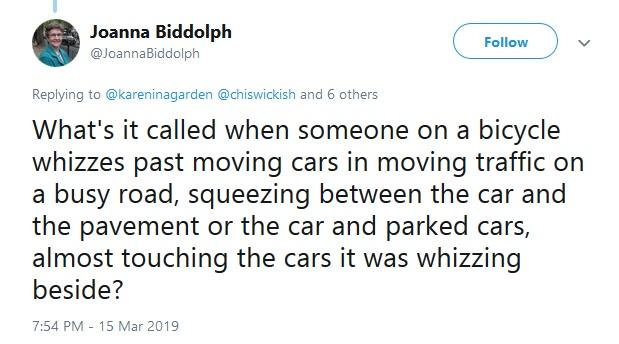 Councillor campaigning against CS9 schooled on cycling by police

A Chiswick councillor campaigning against CS9 has been given an education by police via Twitter after taking issue with cyclists “whizzing” past cars in moving traffic.

Based on this, her fear is that CS9 will lead to Chiswick becoming “a ghost town.”

The report’s a fun read. She says that one cyclist who went the wrong way down a cycle lane “provided more evidence that cyclists will do whatever they wish even when they have what they say they want.”

When she tweeted a link to the report, a number of other users took issue with her conclusions, including Jeremy Vine.

Responding to one cyclist’s account of a recent close pass, Biddolph responded: “What's it called when someone on a bicycle whizzes past moving cars in moving traffic on a busy road, squeezing between the car and the pavement or the car and parked cars, almost touching the cars it was whizzing beside?”

But Biddolph continued, asking why this ‘undertaking’ wasn’t considered close passing: “How does it differ from close passing – other than that it's the person on the bicycle doing the close passing?

At this point, West Midlands Police took up the educational challenge.

Joanna, what you are describing is called "filtering" activily encouraged by @transportgovuk for both motorcycles & cycles, actually taught in #bikeability level 3. If done correctly it is risk free & enables those on 2 wheels to be the most efficient form of transport

Due to the inherent sense of vulnerability that comes with 2 wheeled forms of transport the riders, for the most part are incredibly careful as they do not wish to be hurt, unfortunately the same cannot be said when it is a vehicle going the passing #driverbehaviour #teststandard

You will often find ourselves "filtering" whilst on cycle patrol, motorcycle patrol or on #OpClosePass with no harm to ourselves or other road users. It's always a risk assessed judgement call on behalf of the "filterer" but if done correctly is perfectly legal and correct riding