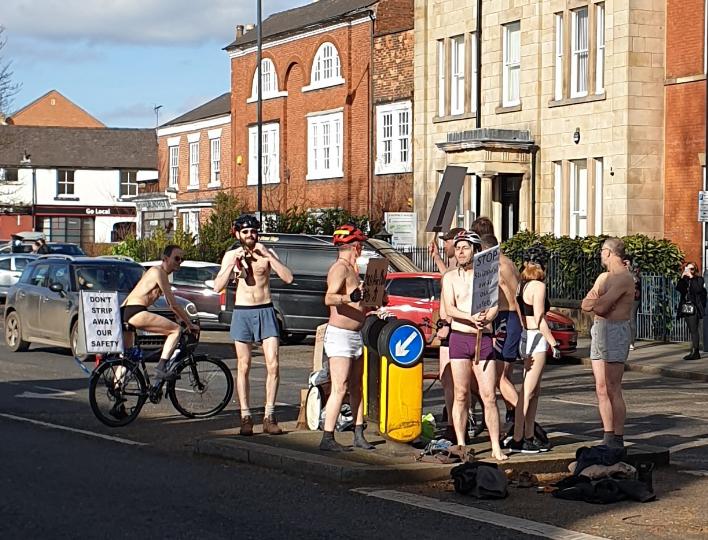 Cyclists in Derby yesterday stripped down to their underwear in protest at plans to remove a bus and cycle lane on the East Midlands city’s Friargate and replace it with a lane for cars – publicising the event with a #strippingawayyoursafety hashtag on social media.

Members of the Derby Cycling Group braved temperatures of 13 degrees Celsius (55 degrees Fahrenheit) in the protest which took place between 11am and 12 Noon yesterday and concluded outside the headquarters of Derby City Council, which has claimed that the changes will help reduce vehicle emissions.

They were joined by Chris Williamson, the Labour MP for Derby North, who posted pictures of the protest to Twitter. Some 50 people attended, though not all of them stripped off.

In a blog post earlier this month publicising the protest, Derby Cycling Group said: “Derby City Council are planning on degrading and removing cycling infrastructure on Friargate between Brick St and Bridge St.

“The plans will see the removal of a bus/ cycle lane to create space for two lanes of cars.

Tony Roelich, the organisation’s acting chair, told BBC News yesterday: “This is something we have never done before – usually we talk to council officers and councillors and try to get better infrastructure.

“But in this case the situation is quite serious. We don't see any reason why it needs to be done.”

He added: “The protest is symbolic of the stripping away of cyclists' safety and shows how vulnerable riders are.”

Derby City Council has held two consultations into the proposed changes, and cabinet member for leadership, regeneration and public protection, Matthew Holmes, said: “There are often competing needs and views expressed in the city from residents, groups and businesses.

“Where concerns cannot be specifically addressed through the refinement of the preferred option, further consideration is being given to other funding sources to address the issues,” he added.