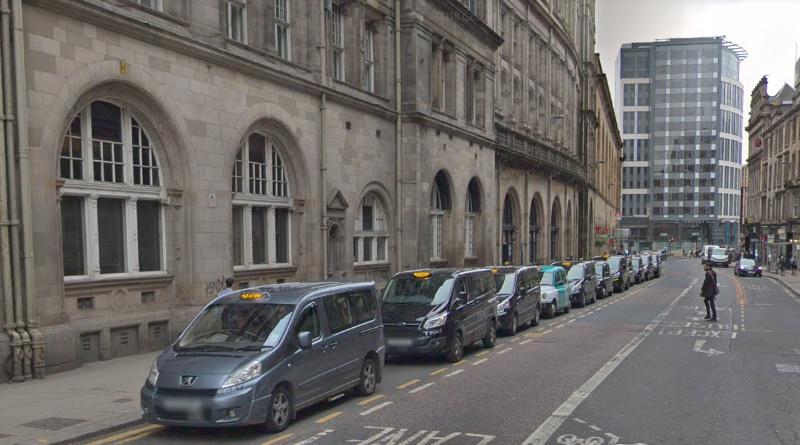 “I signalled to him to move into the side so I could pass him. The man then kicked my cab”
by Alex Bowden

A Glasgow cab driver has been issued with a warning after he got out of his vehicle and punched a cyclist.

The Evening Times reports that after Robert Cunningham picked up two passengers outside Central Station, a pair of cyclists – one male, one female – pulled up ahead of him at a set of traffic lights.

He then overtook them and was said to have caused them to take evasive action. Cunningham then got out of his cab and punched the male cyclist in the face.

He denied this after being called to appear before a panel.

“That is just lies,” he said. “I have already paid £150 in damages. I had parked outside Central Station and picked up two visitors from England and was taking them to their hotel.

“Two cyclists came up behind me and stopped at the red traffic lights. I was going to let them go ahead when the lights changed but the girl pulled to the left and the man stayed in the middle of the road.

“I signalled to him to move into the side so I could pass him. The man then kicked my cab. I questioned him before he threatened me.

“He came towards me and I put my hands out to defend myself. I have been driving private hire cars and taxis for at least 22 years.”

Councillor Gary Gray said: “When you got out of your car to confront the cyclist you could have been seen to be aggressive.”

He asked what Cunningham had learned from the experience.

“I will not get involved in future,” he replied. “I don’t want this to happen again. Nobody has every kicked my cab before.”

Councillor John Kane added: “Our taxi drivers are ambassadors. You are telling us that two visitors from England are away back home, telling their family and friends of this experience.”