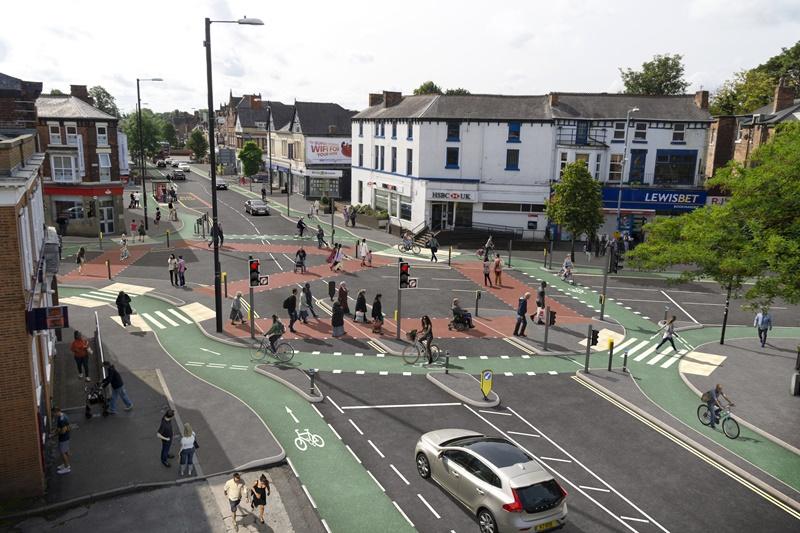 Cyclists and pedestrians will be given priority over cars in some key areas if proposals for the Manchester to Chorlton Beeline are approved. Plans were unveiled for the flagship cycle route today with a public consultation due to run until January 11.

In June, Greater Manchester announced plans to create the largest cycling and walking network in the UK, comprising 1,000 miles of routes, including 75 miles of Dutch-style segregated cycle lanes.

The individual routes will be known as Beelines, taking their name and logo from the worker bee that is one of the emblems of the city.

“It’s not really about people using bikes and walking,” explained Greater Manchester’s Cycling and Walking Commissioner Chris Boardman at the time. “It’s about making better places to live and work by giving people a real choice about how they travel. In doing so, we’ll make the city region healthier and more prosperous.”

It will be a mix of segregated, hybrid and marked cycle lanes with significant changes to major junctions, such as at Barlow Moor Road/Wilbraham Road where controlled cycling and walking crossings will be introduced.

Detailed designs for the Metrolink bridge road option on Manchester Road and the junction at Stretford Road/Chorlton Road are still being worked on. Plans for these aspects will be published in the New Year.

Boardman, commented: “We want to make cycling and walking the natural choice for short journeys, giving people the freedom not to have to drive. That means creating world-class streets where people want to socialise and relax. Some of the junction designs proposed are the most advanced yet that we’ve seen in the UK.

“Manchester City Council and Trafford Council deserve full credit for coming up with such an ambitious and appealing cycling and walking route.”

Manchester City Council's Executive Member for the Environment, Planning and Transport, Councillor Angeliki Stogia, said: “We are excited to have Chris Boardman's input on creating world-class walking and cycling infrastructure in Manchester. Lots of people have said that they want to walk and cycle more in Manchester and we present this scheme for consultation, as part of our ambition and absolute determination to create a new network of high-quality, safe cycling routes across Manchester. We would like as many people as possible to have their say on the plans.

“This is already a very busy corridor for cyclists, but the proposed upgrade will make the route much safer and more appealing, encouraging many more people to adopt cycling and walking as their preferred modes of transport