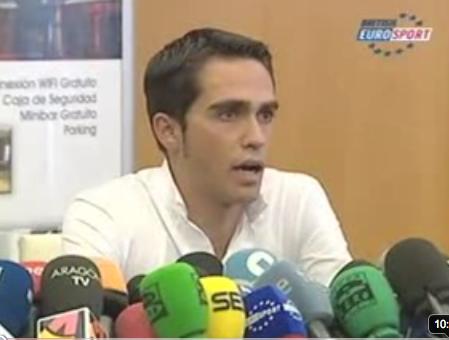 Alberto Contador insists that his positive test for the banned substance clenbuterol, miniscule amounts of which were found in a urine sample taken from him just days before he won his third Tour de France title in July, resulted from his having eaten contaminated meat.

The Astana rider was speaking at a press conference in Spain, hastily arranged in the wake of this morning’s announcement by cycling’s governing body, the UCI, that the doping test carried out on the 27-year-old on the second rest day of the three-week race had resulted in an “adverse analytical finding.”

As is evident from the video of the press conference below, Contador appeared highly composed as he put forward a detailed explanation of the day in question, stating that the meat in question had been brought across the border from Spain due to dissatisfaction with the food on offer at the team hotel.

The Spaniard stated that other members of the Atstana team also ate the suspect meat, but not the only other member of the Kazakh outfit to have been subject to doping control at the same time as him, Alexandre Vinokourov.

Clenbuterol, which has prescription uses include acting as a decongestant for sufferers of asthma and other conditions, helps with aerobic performance and boosts the blood’s capacity to carry oxygen. It also causes fat to be metabolized more quickly, and is widely used to help with weight loss.

The UCI announced Contador’s result this morning, saying that the amount of clenbuterol found in the Spaniard’s urine samples taken on the second rest day of the race is “very small” and that further investigation is required. It added that it “continues working with the scientific support of WADA [the World Anti-doping Agency] to analyse all the elements that are relevant to the case. This further investigation may take some more time.”

According to Spanish newspaper El Pais, Pedro Manoelles Marqueta, the secretary general of the Federación Española de Medicina en el Deporte (the Spanish Federation of Medicine in Sport) says that the presence of clenbuterol in Contador’s bloodstream as a result of his having eaten a contaminated steak is “possible but unlikely.”

Manoelles Marqueta said that while Contador had the right to request a second analysis of the samples, it was unlikely that they would produce a different result. "There are about 200,000 tests a year like this, and cases in which the latter does not confirm to the first are rare, very rare," he maintained.

In the event that the original result were confirmed following a re-test, he added, “the UCI would create a commission of experts and begin a long process. The ultimate consequences could be fines and prohibition from competing from two years, including the withdrawal of awards.”

Perhaps ominously for Contador, Manoelles Marqueta pointed out that the amount detected was immaterial. “That does not matter. A positive is a positive,” he said.

That echoed the words of David Howman, director general of the World Anti-doping Authority, who this morning told The Associated Press: “The issue is the lab has detected this. They have the responsibility for pursuing. There is no such thing as a limit where you don't have to prosecute cases. This is not a substance that has a threshold."

There appears to be widespread sympathy for Contador’s predicament among cycling fans on Twitter and in the press, given the miniscule amount of clenbuterol found in his bloodstream, which was of 0.000 000 000 05 grams per milliletre, equivalent to 50 picograms.

The Daily Telegraph points out that the amount is “apparently 400 times less than the minimum volume a World Anti-Doping Agency (WADA) or UCI accredited tester must be able to detect to formulate a sound analysis.”

The stark fact is though that with no minimum threshold required for a positive test, Contador could very well be looking at a two-year ban, even if, as he asserts, he is a victim of circumstances.

While anti-doping rules are strict that individual athletes are entirely responsible for what gets into their bodies, it does raise questions of whether the rules need to be reassessed given the development of drug analysis machines such as the one used in this case in Cologne that are able to detect infinitesimal quantities of a substance.

As Contador points out, he was repeatedly tested during the Tour de France, and only in the test that is the subject of today’s announcement was the slightest abnormality found.

In a response to today’s news on the Science In Sport website, which cites research conducted into clenbuterol, it is suggested that there is a compelling need for a safe baseline to be introduced for the substance.

David Millar, meanwhile, who was stripped of his 2003 world time trial title after confessing to using EPO, warned after winning the silver medal in the same event in Geelong earlier today that there was a risk of Contador being “thrown to the sharks.”

Quoted in The Daily Telegraph, the Garmin-Transitions rider said: “I think there's a very strong chance that this is being blown way out of proportion… because it's a micro-dose and it was on a rest day," said Millar who finished runner up to Switzerland's Fabian Cancellara who won a record fourth world title.

"It makes no sense because it would have come up in other doping controls. It's a shame that it has been released when it hasn't been resolved. It's something that should be resolved behind closed doors.

"There are strict rules and I think unfortunately in cycling, for the right reasons, we always jump to the worst-case scenario and because of the history we have in the sport unfortunately maybe Alberto's been thrown to the sharks. I think it will get resolved, and I hope so for Alberto's benefit and I hope so for the sport's benefit," Millar added.

Bjarne Riis, who recently signed Contador to his Team Sungard-Saxo Bank for 2011, told the Danish paper Sporten, “I’m shocked just like everybody else.”

He added that he had spoken to Contador, but accepted that the matter was now in the hands of the UCI, saying, “I hope that he is clean. But we have to wait and see what comes out of it.”

“There is no doubt that there is a positive test, but it is peculiar in that the dose - or whatever it is - is so small,” Riis added.

The prospect of losing Contador’s sevices should the worst happen is clearly an unpalatable one for the Dane, but he insisted, “It's out in the future and now we just wait and see what happens. It is a special case. I think we can agree on all together."

We will bring you more on this developing story throughout the day, so keep an eye out on our Twitter stream for updates.