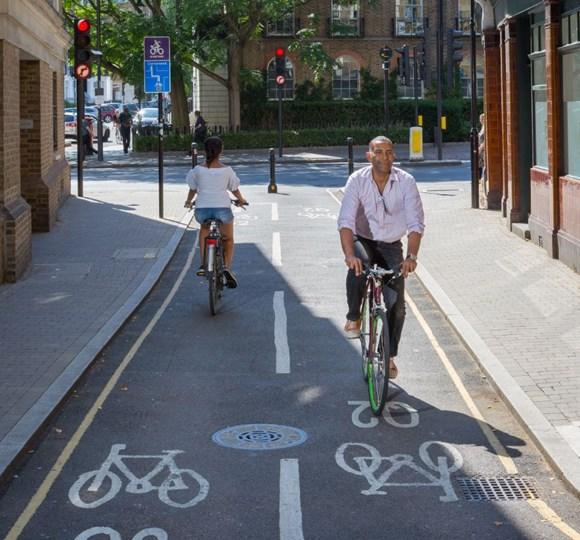 Transport for London (TfL) has officially unveiled Quietway 2, running from Walthamstow in the north east of the capital to Bloomsbury, with a separate Quietway 2 West section continuing from Notting Hill to East Acton. Once linked by a proposed route through Westminster, they will form a 23-kilometre continuous cycle route.

The Walthamstow to Hackney section was opened yesterday morning by London’s Cycling & Walking Commissioner Will Norman, who said: “We’re striving to get as many people as possible walking and cycling in the capital.

“Creating these Quietway routes to build a genuinely London-wide network is vital to give more Londoners the confidence to take to two wheels.

“An amazing 730,000 trips are made by bike in the capital every day and I look forward to building on that further through the Quietway routes, which have already helped to boost the numbers cycling in our city.

“Our focus is on ensuring that Quietways are high-quality, with low traffic volumes and speeds, enabling all ages and abilities to enjoy cycling.”

Developed in partnership with the London boroughs of Islington, Hackney and Waltham Forest, Quietway 2 is 12 kilometres in length and from Bloomsbury heads through Angel, Haggerston, London Fields and Clapton on its way to Walthamstow.

It also links with the existing Cycle Superhighway 1 in De Beauvoir Town and Cycle Superhighway 6 in Bloomsbury, and proposed routes including Quietway 13 at London Fields – where there is also access, via nearby Broadway Market, to the Regent’s Canal towpath – and Quietway 10 near Angel.

However, as with Quietway 1, which runs south of the Thames from Greenwich to Waterloo and was unveiled in 2016, reaction to parts of the new route from campaigners has highlighted some shortcomings, the following tweets being just two examples.

The ‘Quietway’ route here is an indistinct smudge on some new paving. It looks like a cycle route to people cycling, while looking like a pavement to people walking. A recipe for conflict. pic.twitter.com/ycYzWfRDK5

New quietway 2 map shows that if you want to cycle to a train station, the cinema, a hospital, etc then it will bypass all of those places! (as does CS1) pic.twitter.com/DaAHhXTYiA

According to Transport for London, “Quietways are continuous, direct and clearly signed cycle routes on less-busy streets across London,” designed to complement the Cycle Superhighway network and encourage more of the city’s residents and visitors to take up cycling as well as improving conditions for pedestrians.

But in the past, London’s former cycling commissioner Andrew Gilligan – appointed to the position by Boris Johnson when he was mayor – has described the programme as a failure partly because some boroughs would not block streets on Quietway routes to rat-running motorists.

> Gilligan: Quietways programme is a failure

His concerns sadly proved justified in June when cyclist Antonio Marchesini was killed on Quietway 1 in Deptford with the driver of the Mercedes car that struck him abandoning the vehicle at the scene and fleeing. He handed himself in at a police station three days later.

Simon Munk, infrastructure campaigner at the London Cycling Campaign, told road.cc after Mr Marchesini’s death that the fatal crash had happened at “one of the notoriously weakest points on Quietway 1.” Originally, it had been proposed to block the road to through traffic, but that plan was scrapped following consultation.

TfL highlights though that Quietway 1 has resulted in more people cycling, with an increase of 54 per cent since it opened, and the proportion of women taking to the route on bikes rising from 29 per cent to 35 per cent.

Three other routes have also been opened recently – Quietway 3 from Gladstone Park to Kilburn Station, Quietway 5 from Oval to Clapham Common, and Quietway 15 from Belgravia to Earl’s Court.

Sustrans helped TfL and the boroughs develop the new route and the sustainable transport charity’s head of infrastructure delivery, Kelly Clark, said: “It is wonderful to see Quietway 2 officially open.

“We have created a route which invites people to cycle rather than drive. It would be fantastic to see people who have previously been nervous about riding in London, dust off their bike and try out the route too.

“By creating an environment which encourages people to walk and cycle, we can make a huge difference to all of our lives. Building active travel into our day helps us get fitter and healthier.”

She added: “If we drive less, the air we breathe becomes cleaner and with fewer vehicles on the road, there’s less congestion so our road network becomes much more efficient, so with every Quietway that opens, that is great news for Londoners.”