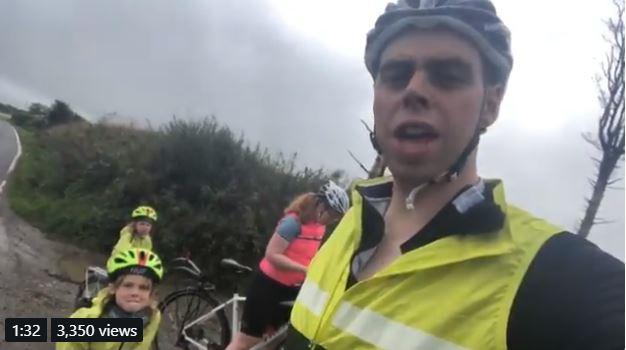 Video: Cycling family in plea to top cop on danger on Cornwall's roads

A family whose cycling travels around them the UK have won them thousands of followers on social media and seen them featured on media outlets such as BBC News have appealed to Cornwall’s top police officer to tackle bad driving on the county’s roads following a series of encounters with poor drivers while out riding yesterday.

The Jones family from Wellingborough, Northamptonshire, hit the headlines in June when Rhoda, aged 4, was filmed on a tag-along giving a lorry driver in Jedburgh in the Scottish borders a thumbs-up as he overtook her with plenty of room to spare.

She was riding with parents Tom and Kate – who blog about the family’s adventures at Family ByCycle and brother and sister Thomas Ivor, nine and Ruth, five, and the video quickly went viral.

Yesterday, the family were riding in Cornwall and it proved to be a much less happy experience, summed up by the picture in this tweet.

Because many motorists are dicks. Most of them, on the A39 today. pic.twitter.com/WdQSjdwKPr

A subsequent tweet revealed one particular nasty experience, which was flagged up to Devon & Cornwall Police on Twitter.

A vehicle towing a caravan, which Katie and Ruth could almost touch yesterday on the A392 at Quintrell Downs, is also untaxed. @DC_Police we have video and a reg plate for you. Where do we upload it for you to view, please? Not putting it on here for now because it merits a NIP.

This morning, dad Tom posted a video addressed to the force’s Chief Constable, highlighting the lack of police presence on a road full of holiday traffic and urging Devon & Cornwall Police – which operates its roads policing unit jointly with Dorset Police – to take action.

Our message for Chief Constable Otter of @DC_Police - please RT so we get some traction on this. pic.twitter.com/7Wz4esP2LK

He said: “We’re on the road this morning and we’ve got a quick message for the Chief Constable of Devon & Cornwall Police” [since 2013, Shaun Sawyer, with Stephen Otter having left the previous year – ed].

“We’ve looked back at the video we shot on the A39 and the A392 yesterday coming through your patch.

“We would love to know why on one of the busiest days of the summer coming in and out of Newquay we did not see a single Devon & Cornwall traffic car for the entire length of our journey.

“We’ve got a lovely collection of videos of drivers behaving appallingly towards us tomorrow.

“In particular, a red Ford – untaxed, we checked it – towing a caravan almost took out Katy and Ruth coming through Quintrell Downs.

“We’ve already asked on Twitter but we’ve not had a reply. Please would you get in touch with us.”

He continued: “We don’t want to share the video publicly because that will prejudice the opportunity for you to issue a NIP [Notice of Intended Prosecution] and to charge them and to take the matter to court.

“It’s not fair that a family like ours is being intimidated off Devon & Cornwall’s roads. Please will you do something to restore our confidence.

“We’re going to be riding through the county, or through your patch, for the rest of today.

“So if you’d like to come out and see us on the road, maybe come and have a look at the film with us, come and experience the conditions we’re putting up with.

“Bring an unmarked car and come and come and sit on the road with us for a little while, we’d love to see you because this is a really, really serious matter.”

He added: “Road harm is a significant cause of death and this is just not acceptable.

“Yesterday, a busy day, you’ve got grockles everywhere, poor standards of driving and not a single traffic cop to be seen and we don’t think that’s fair on families like ours.

“Please reach out and get in touch and we look forward to having a positive conversation with you soon. Thank you.”

The family’s experience has seen them receive a lot of messages of support on social media – as well as one on the roadside itself yesterday.

This lady is fellow adventure cyclist @Faye_Shepherd. Faye is a flippin’ legend. Toughest moment of the toughest day on the road we’ve had for ages, and she went and found us. With chocolate. The adventure community at its very best. Bless you, Faye! Have a quiet shift! pic.twitter.com/MUcm3kGyS1

1
Council has "no intention to enforce" parking restrictions in segregated cycle lane where cars are parked bumper to bumper
2
Near Miss of the Day 521: Close pass ... by a police van (plus how it all went a bit Kafkaesque afterwards)
3
The real story about Boris Johnson’s bike ride? It highlights confusion over lockdown rules
4
Geraint Thomas talks new podcast, cycling club snobbery and his new penchant for gravel bikes
5
6 cycling gadgets from CES 2021
6
Near Miss of the Day 520: Cyclist hit by driver's wing mirror coming under narrow bridge
7
Cycle to Work scheme bikes (temporarily) don't have to be used for commuting
8
Cyclist crushed after farm worker failed to secure straw bale to trailer, court told