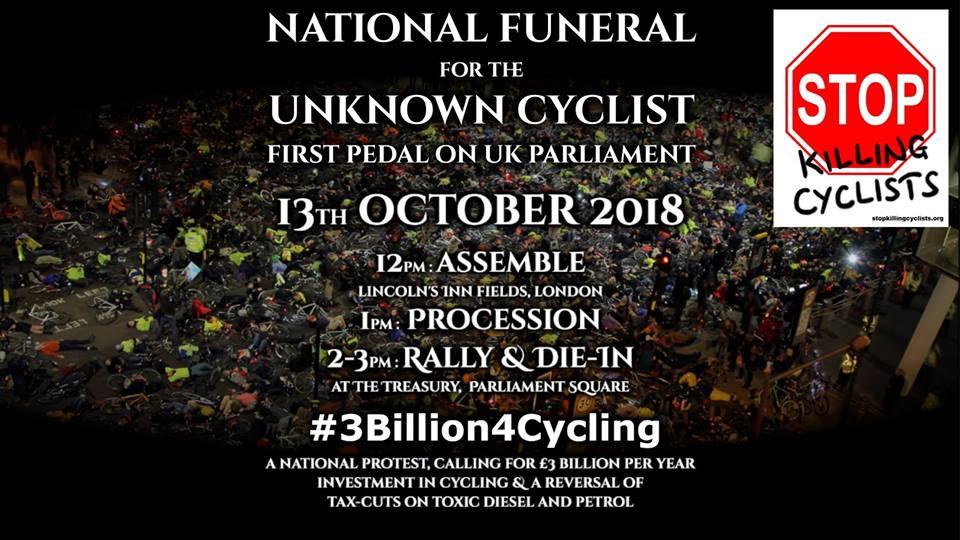 Pedal on UK Parliament to be held in October

Branded the National Funeral for the Unknown Cyclist in honour of all victims of road traffic collisions, pollution and inactivity
by Alex Bowden

Campaign group Stop Killing Cyclists is organising a protest ride on UK Parliament in October. Similar to Scotland’s annual Pedal on Parliament, the National Funeral for the Unknown Cyclist will comprise a procession and rally as well as a ‘die-in’ outside the Houses of Parliament.

In February 2012, up to 2,000 cyclists gathered in London to cycle on the Westminster Parliament in support of safer cycling and cities fit for people.

On April 28 of the same year, a follow-up ride was echoed in Scotland where a group of cyclists rode to Holyrood. This has now become an annual event.

Each year the ride follows a route from The Meadows to the Scottish Parliament. This year’s was led by round-the-world cyclist, Mark Beaumont, with additional rides taking place in Inverness and Aberdeen.

On October 13, London campaigners will ride from Lincoln’s Inn Fields to Westminster. The protest is to condemn all existing and previous governments for their failure to take comprehensive action on safer cycling.

It will also call for £3bn year to be invested in a national protected cycling network and for a reversal of tax cuts for diesel and petrol.

It has been branded the National Funeral for the Unknown Cyclist as it will also mark the deaths of those killed cycling on UK roads, as well as all those who have lost their lives as a result of pollution or inactivity.