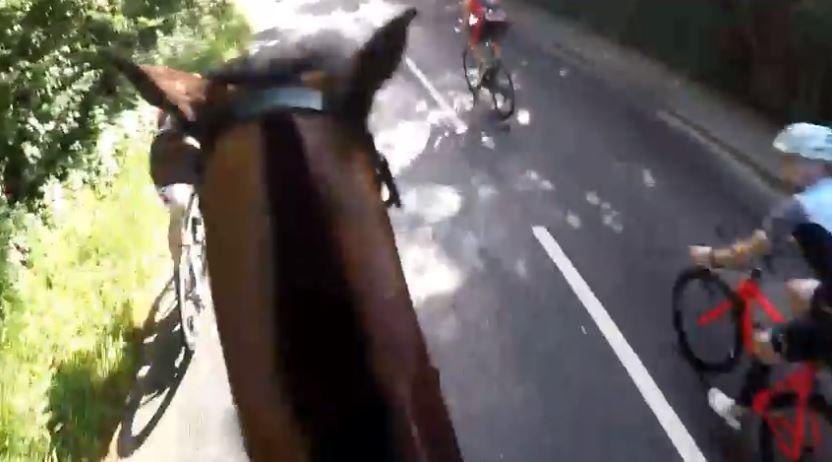 Footage of incident at Windsor Triathlon yesterday has been viewed more than 3.8 million times on Facebook
by Simon_MacMichael

The horse rider who filmed the moment she was hit by a competitor in yesterday’s Windsor Triathlon who undertook her at speed during the cycling leg of the event has said that police are investigating the incident.

The footage, shot by Facebook user Jennifer Katherine, has been viewed more than 3.8 million times on the social network since being posted yesterday morning.

In a follow-up post, she called for road users to show mutual respect towards each other, adding that the incident is “Under investigation with police” as well as with officials from Human Race, the organisers of the event.

The route of the cycling leg of the event lies entirely within Berkshire, meaning that Thames Valley Police would be the relevant force, and the horse rider was reportedly due to speak officers this afternoon.

Meanwhile yesterday evening, following publication of our original story on the incident, Human Race reiterated on social media that they are conducting a full investigation and that any riders identified through the video will be excluded from future events.

They said: “We are in contact with the individual effected by the horrible incident earlier today at Windsor Triathlon. We want to sincerely apologise to her and her poor horse.

“We have convened a senior level committee internally, and along with British Triathlon we will be reviewing the video evidence to identify those involved in this.

“Those at fault will be disqualified and banned from all future Human Race events.

“There will be further ramifications for these people with British Triathlon and potentially further action taken,” they added.