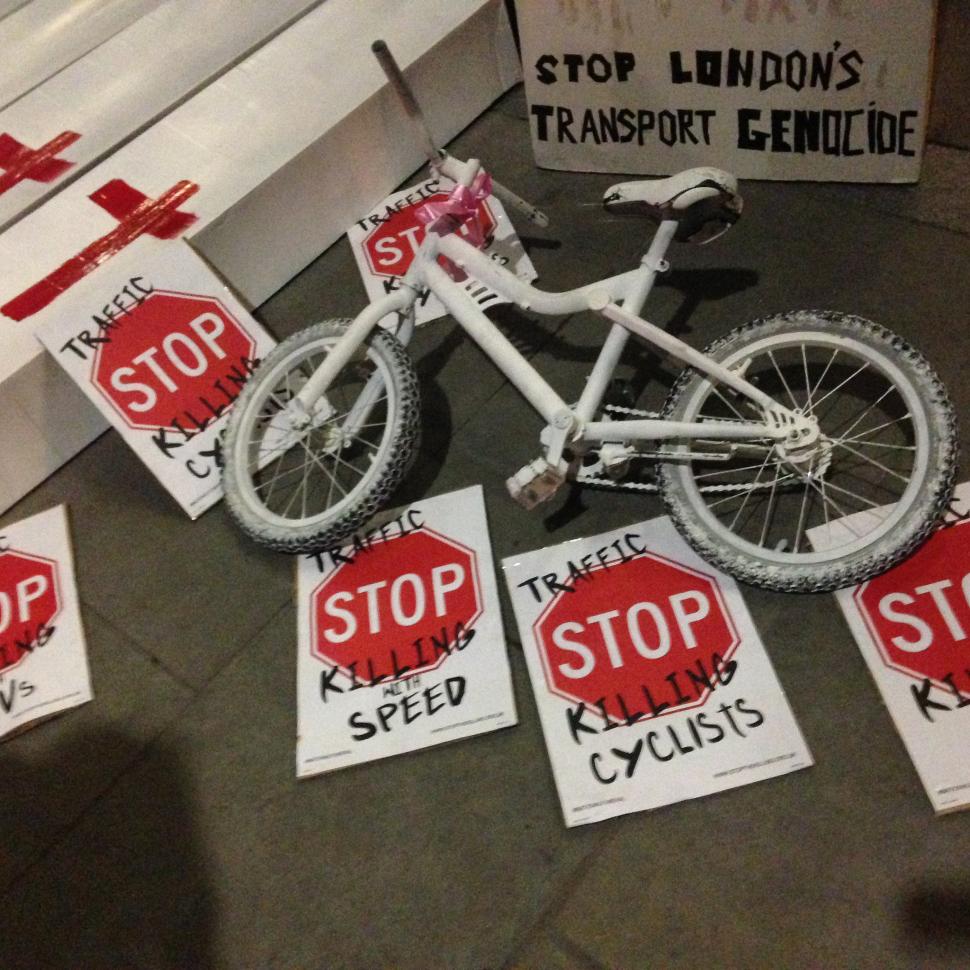 Protest will take place outside council's office's in Woolwich on Thursday 7 June...
by Simon_MacMichael

The campaign group Stop Killing Cyclists will next week hold a vigil and die-in outside Greenwich Town Hall after two cyclists were killed in collisions with lorries in the borough in a little over a week.

Both fatal incidents happened on roads where Transport for London has previously announced plans for safer infrastructure for cyclists that have failed to materialise.

The first took place on Romney Road in central Greenwich at around 4.30pm on the afternoon of Wednesday 9 May. The victim, 46-year-old man, was airlifted to hospital, but died from his injuries two days later.

The second happened on the notorious Woolwich Road roundabout, which passes under the Blackwall Tunnel Approach Road around a mile to the east, at around 8.25am on the morning of Friday 18 May. The victim, a 37-year-old man, died at the scene.

As we reported on Saturday, the roundabout was initially included on TfL’s Safer Junctions programme, but no longer appears on the list of locations due to undergo safety improvements.

Together with Romney Road, it also lies on the originally proposed route of Cycle Superhighway 4, which had been due to run as far east as Woolwich.

However, under revised plans announced last year, it will now finish in Greenwich Town Centre itself, a short distance from where the first fatal collision took place this month.

Stop Killing Cyclists will be holding the vigil and die-in next Thursday 7 June, meeting at 5.30pm for a 6pm start, outside the Royal Borough of Greenwich’s offices at Woolwich Town Hall, Wellington Street, London SE18.

Calling on Mayor of London Sadiq Khan to require lorries on the capital’s streets to be equipped with cameras, the group’s co-founder, Donnachadh McCarthy, said: “Month after month pedestrians and people cycling are suffering horrific deaths by blindly driven HGVs.

“It is time the mayor made CCTV mandatory for trucks sharing our streets with people walking and cycling.”

Stop Killing Cyclists Co-organiser Alex Raha added: “Greenwich Council is delaying the extension of the protected cycle-highway CS4 by up to eight years to Woolwich and failed to install segregated cycle lanes in the Woolwich town centre project, even though original designs considered them.

“Historically, they have been one of the most anti-cycling councils in London. This must now urgently change.”